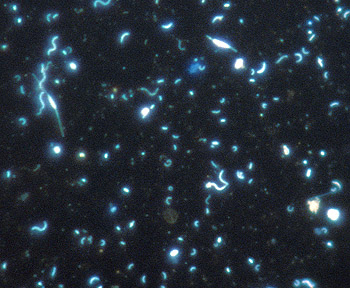 Despite the amazing diversity of marine microbes, a new research paper shows that many different groups work together to obtain nutrition from their surroundings. Image: Ed DeLong © 2000 MBARI

The open ocean contains an amazing diversity of extremely tiny organisms called picoplankton. This group includes relatively simple life forms such as marine bacteria, as well as more complicated organisms. Some picoplankton obtain energy from sunlight through photosynthesis, just as plants do. Others (called “heterotrophs”) eat other picoplankton or consume organic compounds in seawater. A new paper in the Proceedings of the National Academy of Sciences by researchers from the Massachusetts Institute of Technology (MIT) and the Monterey Bay Aquarium Research Institute (MBARI) uses cutting-edge genomic research to show how these infinitesimal creatures react in synchrony to changes in their environment.

Sponsored by the Center for Microbial Oceanography Research and Education (C-MORE), a National Science Foundation Science and Technology Center, and grants from the Gordon and Betty Moore Foundation, this research used an innovative method for collecting marine microbes as well as new ways of analyzing their genomic data.

The researchers collected samples of seawater and microbes every four hours for two days straight, using a drifting version of MBARI’s Environmental Sample Processor (ESP). As part of MBARI’s September 2010 CANON experiment, the ESP was suspended from a large buoy that drifted across the waters offshore of Monterey Bay. This means that all of the samples were taken from a single community of picoplankton as these organisms drifted with the ocean currents. 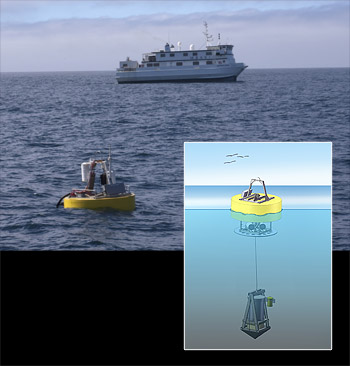 This photo shows MBARI’s research vessel Western Flyer near the float supporting the drifting Environmental Sample Processor that was used to collect marine microbes during MBARI’s 2010 CANON experiment. The illustration (inset) shows the yellow ESP float with the ESP pressure housing suspended in the water beneath it. Image: © 2013 MBARI

As MIT microbiologist (and former MBARI researcher) Ed DeLong put it, “We’ve essentially captured a day in the life of these microbes.”

After returning the samples to the laboratory, the researchers used cutting-edge lab techniques to figure out which genes within the microbes were actively being used at different times of day (which genes were “being expressed”).

This involved sorting through millions of billions of fragments of genetic material and then assigning each fragment to a specific gene and a specific type of microbe. Elizabeth Ottesen, the lead author on the recent paper, worked with Robbie Young (another MBARI alumnus) to develop new number-crunching techniques to perform this herculean task. As DeLong said, “As little as three years ago, I wouldn’t have even considered it possible to get such a high-resolution picture of microbial population dynamics and activity in the ‘real world.'”

The research showed that some groups of genes were expressed repeatedly at specific times of day. For example, genes involved in photosynthesis were most active in the morning, when the photosynthetic microbes ramped up their light-gathering activities.

Although the researchers cannot tell exactly which environmental changes the microbes were responding to, they suspect that the different groups of microbes were working together to obtain different types of food. For example, some picoplankton could have been consuming large organic compounds such as proteins and fats. In the process, they could have produced simpler organic compounds, such as amino acids, which were then released into the surrounding seawater and consumed by other picoplankton.

These results show a surprising amount of coordination between marine microbes. They also suggest that, as in the food webs of larger organisms, many different groups of marine microbes rely on each other to survive on a day-to-day basis. This could help explain why so many species of marine microbes are difficult or impossible to grow by themselves in the laboratory.

Having proved the usefulness of this combination of a cutting-edge sampling technique and data analysis, the researchers are looking forward to studying how marine microbes work together over longer time scales. They also hope to use these new research tools to better understand how communities and populations of marine microbes change over time. This, in turn, could help researchers figure out how picoplankton are likely to respond to large-scale environmental changes such as global warming and ocean acidification.