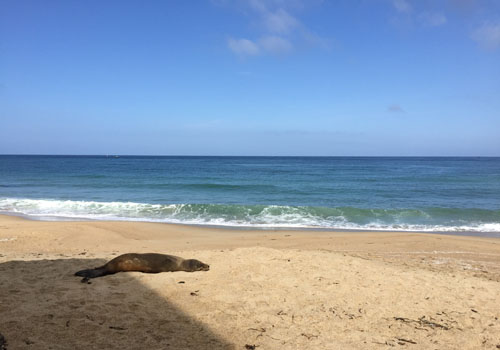 This sea lion was on the beach, lethargic and swaying its head, typical of domoic acid poisoning. MBARI staff called the Marine Mammal Center, which sent a team to rescue this animal. Later, this sea lion was sent to the organization’s Sausalito hospital for treatment.

If you’ve visited beaches in the Monterey Bay area earlier this year, you may have seen young California sea lions stranded on the beaches, weak and emaciated from lack of food. Recently, the Marine Mammal Center has reported that juvenile and sub-adult sea lions have also been stranding on beaches as a result of domoic acid poisoning. Domoic acid is a neurotoxin produced by Pseudo-nitzschia, a phytoplankton that can form toxic algal blooms. Consuming domoic acid can lead to lead to seizures, brain damage, and sometimes death in marine mammals. Because this toxin accumulates up the food chain, sea lions can be affected by eating fish that have been feeding in toxic algal blooms. MBARI scientists studying the water in Monterey Bay have been observing local algal blooms. The Central and Northern California Ocean Observing System conducts predictive modeling of domoic acid. If you see a distressed marine mammal in Monterey Bay avoid getting too close or making any contact. Notify the Marine Mammal Center at 831-633-6298. You can help marine biologists tracking ocean animals by reporting stranded marine life to JellyWatch.