Deploying a Wave Glider on the R/V Paragon 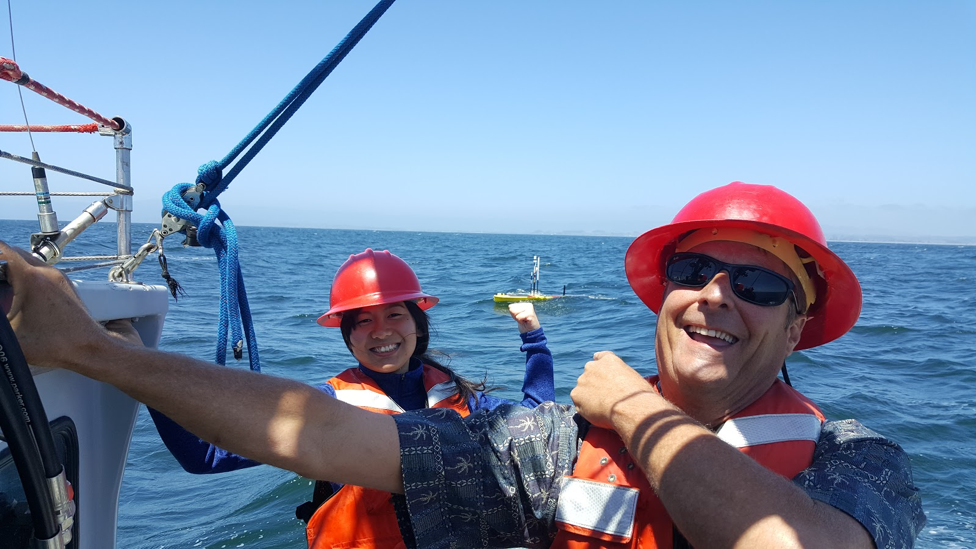 Beverly and Thom, with the Wave Glider in the background.  Image: Brent Jones

Hello! This is engineering intern Beverly Abadines. This summer, my mentor, Thom Maughan, spontaneously invited me to join him and a small crew consisting of Chris Wahl and Brent Jones on the R/V Paragon. Our trip was to deploy a Wave Glider at sea. Wave Gliders, made by the company Liquid Robotics, are autonomous surface vehicles that can be outfitted with a variety of instruments and sensors to help MBARI scientists observe the ocean.

Thom, a software engineer at MBARI, was the project manager of the team that brought the Wave Glider to MBARI and began the collaboration with Liquid Robotics. The team started with a lease of an SV2 Wave Glider and then a purchase of the first customer shipment of SV3 Wave Gliders, where the successful feasibility study demonstrated the usefulness of the Wave Glider to science. The project has now transitioned to the Division of Marine Operations. The platform is managed by Chris Wahl, who continues to grow the program to meet the needs of oceanographic research.

We sailed on the R/V Paragon with the Wave Glider taking up almost all of the floor space as it was MASSIVE.

Thom, Brent, Chris, and I geared up with hard hats, life jackets, and steel-toed boots before we set sail. I was debriefed about safety protocols and uses of tools in events of emergencies, which made the trip sound more dangerous than it actually was but, albeit, remained to be as exciting as I imagined.

This was one of the few boat rides at MBARI where I did not become seasick and was able to fully enjoy the scenery, breeze, and adventure. After sailing for a few miles, we were ready to deploy the Wave Glider, and because the crew provided me with the proper gear and safety knowledge, I was allowed to operate the crane and hoist the Wave Glider into the ocean. 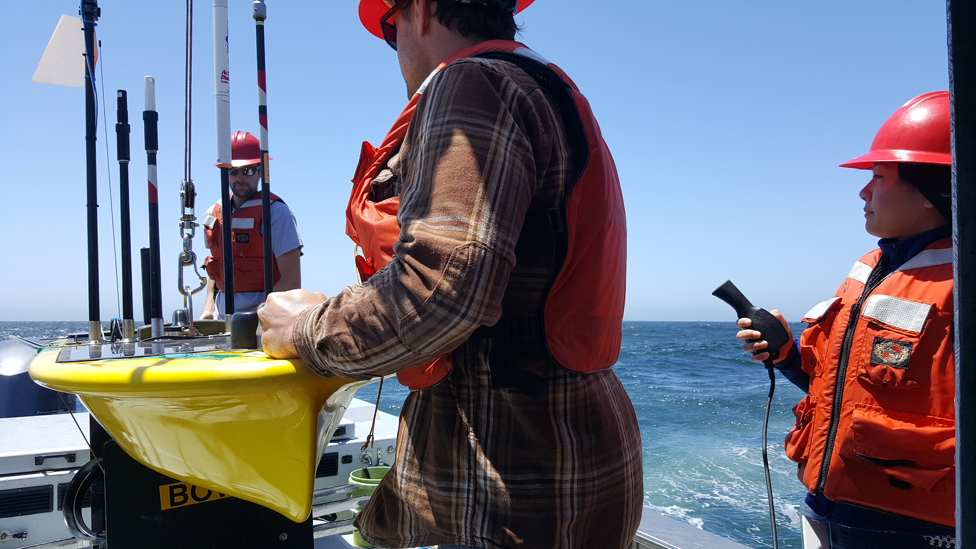 The Wave Glider goes off to fulfill missions all on its own. Image: Thom Maughan

Once the Wave Glider rested on the ocean surface, it thrusted onto its course. Seeing the Wave Glider surf independently across the vast sea epitomized the capability of autonomous systems. The assortment of sensors and navigational and mechanical hardware gave the Wave Glider the abilities to record oceanic data and travel in all sorts of conditions, while software acted as the brain and processed outside information to decide which actions to take. All in all, the Wave Glider was captivating and I could not help but cherish witnessing a product of design and engineering come to life and sail away.

A few weeks after this deployment, the interns had a chance to tour Liquid Robotics and learn about how these gliders are made, so be sure to read Rachel’s post all about that trip!