Posdoctoral Fellow Stephanie Bush is working with the Monterey Bay Aquarium on their exhibit “Tentacles: The Lives of Octopuses, Cuttlefishes, and Squid”, that opened in April 2014. This exhibit showcases the diversity and ecology of cephalopod molluscs. By using MBARI’s expertise and technological resources to acquire deep-sea squid and octopuses, the exhibit introduces the public to these little known animals.

A small cirrate octopus (Opisthoteuthis sp.) the research team has collected and displayed multiple times turned out to be an undescribed species. Stephanie and her colleagues at the Aquarium are working to formally describe it. In the meantime, Science Friday made a video about this little octopus which garnered much local, national, and international attention. 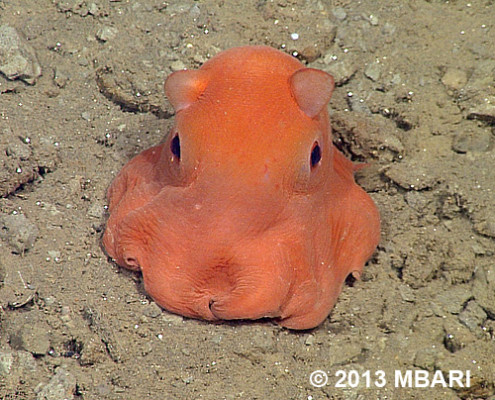 This flapjack octopus in the genus Opisthoteuthis was photographed on the seafloor at a depth of 330 meters (about 1,080 feet) in Monterey Bay. Flapjack octopuses swim by moving their fins, pulsing their webbed arms, pushing water through their funnel for jet propulsion, or all three at once. They often hover just above the seafloor, looking for small crustaceans, worms, and other food. MBARI researchers are working with aquarists at the Monterey Bay Aquarium to learn more about flapjack octopuses. 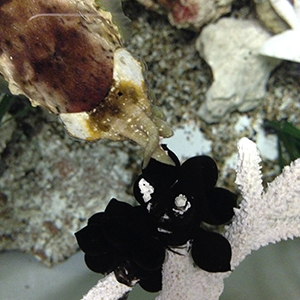 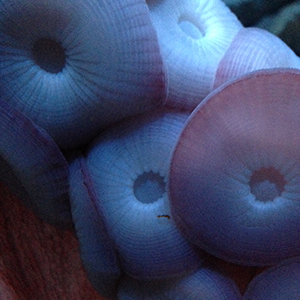 Suckers of a giant Pacific octopus 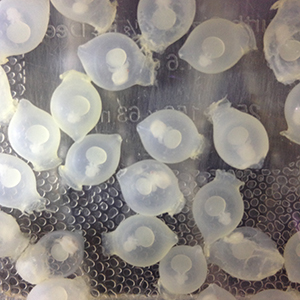 The Monterey Bay Aquarium has a number of research cruises scheduled for collecting these animals. Animals are held in MBARI’s cold dark room or transported to the Aquarium where researchers are working hard to find the best methods for keeping these animals alive and healthy.

*have been displayed at the Monterey Bay Aquarium