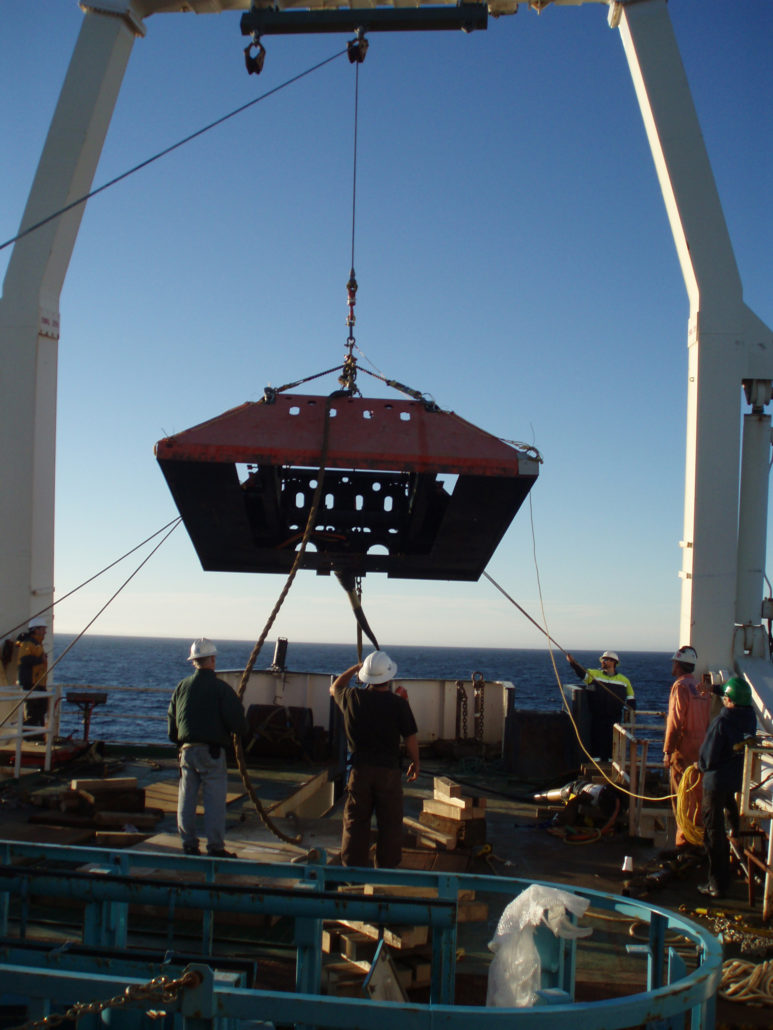 Crew members aboard the IT Intrepid launch the protective metal frame for the hub of the MARS observatory. This orange metal pyramid—about 4 by 5 meters (12 by 15 feet) across and 1.2 meters (4 feet) tall—protects the observatory electronics from damage due to anchors or fishing nets. Image: Keith Raybould © 2008 MBARI

Off the coast of Central California, in the inky darkness of the deep sea, a bright orange metal pyramid about the size of two compact cars sits quietly on the seafloor. Nestled within the metal pyramid is the heart of the Monterey Accelerated Research System (MARS)—the first deep-sea cabled observatory offshore of the continental United States. Six years and $13.5 million dollars in the making, the MARS Observatory went “live” on Monday, November 10, 2008, returning the first scientific data from 900 meters (3,000 feet) below the ocean surface.

Construction of the observatory was coordinated by the Monterey Bay Aquarium Research Institute (MBARI). According to Marcia McNutt, MBARI president and CEO, “Getting all of the components of the observatory to work together perfectly in the remote, unforgiving, inhospitable environment of the deep sea was no easy task. But the tougher the challenge, the greater the glory when it is finally achieved. Some day we may look back at the first packets of data streaming in from the MARS observatory as the equivalent of those first words spoken by Alexander Graham Bell: ‘Watson, come here, I need you!'”

Like the Hubble Space Telescope, the MARS Observatory is not designed for human occupation, but is operated remotely. The observatory will serve as both a “power strip” and a “high-speed internet connection” for scientific instruments in the deep sea. It will allow marine scientists to continuously monitor the dark, mysterious world of the deep sea, instead of relying on brief oceanographic cruises and instruments that run on batteries.

The heart of observatory consists of two titanium pressure cylinders packed with computer networking and power distribution equipment. These cylinders are nestled within a protective metal pyramid on the deep seafloor. This central hub is connected to shore by a 52-kilometer-long cable that can carry up to 10,000 watts of power and two gigabits per second of data. Most of the cable is buried a meter (three feet) below the seafloor. 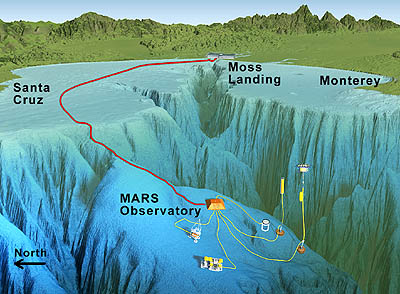 The MARS Observatory will allow scientists to perform a variety of long-term and real-time experiments 900 meters below the surface of Monterey Bay, off the coast of Central California. Image: David Fierstein © 2005 MBARI

Over the next few months, a variety of scientific instruments will be hooked up to the observatory using underwater “extension cords.” These will include instruments to monitor earthquakes and to capture deep-sea animals on video. Researchers will also be testing an experiment to study the effects of ocean acidification on seafloor animals. MBARI technicians will use remotely operated vehicles (robot submarines) to plug these instruments into the central hub. After the instruments are hooked up, researchers will be able to run experiments and study deep-sea data and images from anywhere in the world. 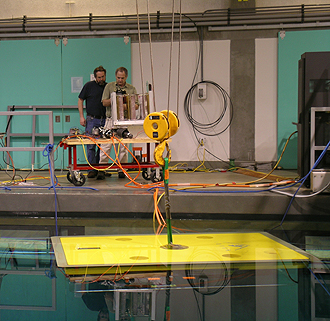 MARS operations manager Craig Dawe and MBARI engineer Gene Massion work on the central hub of the MARS Observatory in the MBARI test tank. Beneath the yellow float are two titanium cylinders containing the submarine equivalent of an electrical substation and a computer network switch box. Image: Kim Fulton-Bennett © 2008 MBARI

Providing a place for researchers to test their deep-sea instruments is one of the primary goals of the MARS observatory. Many instruments will be tested on MARS before being hooked up to other deep-sea observatories offshore of the U. S. and other countries.

Funded in 2002 by a grant from the National Science Foundation, the MARS Observatory was constructed through a collaborative effort by MBARI, Woods Hole Oceanographic Institution, the University of Washington Applied Physics Laboratory, NASA’s Jet Propulsion Laboratory, L-3 MariPro, and Alcatel-Lucent. Each group was responsible for preparing a different part of the observatory. According to Keith Raybould, the MARS project manager, “MARS was a very challenging project. Our academic partners and contractors used many new, cutting-edge technologies. Everything had to be carefully coordinated so that all the parts of the system would work together seamlessly.”

Designing and constructing this one-of-a-kind system took over six years of hard work. The environmental review process for the MARS cable alone lasted over two years and cost roughly one million dollars. One of the biggest technical challenges was creating an underwater electrical system that could convert the 10,000 volts of direct current coming through the cable to the much lower voltages required by scientific instruments. 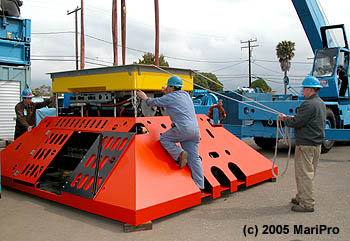 In this construction photo, workmen lower the hub of the MARS Observatory into the orange pyramid-shaped metal frame that protects the hub from damage due to fishing nets. Image: © 2005 L-3 MariPro

In April 2007, an undersea cable was laid from the observatory site to shore. On February 26, 2008, MBARI engineers and remotely-operated-vehicle pilots installed the central hub and powered up the system. Unfortunately, after only 20 minutes of operation, the plug for the main power-supply began to leak, and the system had to be shut down.

Following this setback, MBARI staff and contractors spent the next eight months repairing and testing the observatory hub. This effort culminated in early November, 2008, when the cable-laying ship IT Intrepid arrived in Monterey Bay and hauled the trawl-resistant frame up to the surface. Working around the clock, technicians on board the ship replaced the failed underwater connector, then lowered the frame back down to the seafloor. On November 10, 2008, the MBARI marine operations group reinstalled the observatory hub and powered the system up. All systems worked perfectly. The MARS observatory had finally become a reality. 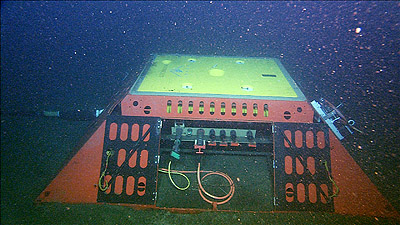 The completed hub of the MARS observatory sits on the seafloor 900 meters below the surface of Monterey Bay. The cable to shore extends to the left side of the photo. Plugs for four of the eight experiments are visible inside the open doors of the protective steel frame. Image: © 2008 MBARI

One of the first experiments that will be hooked up to the MARS observatory is the FOCE project. Led by MBARI chemist Peter Brewer, this experiment will allow researchers to find out how the increasing acidity of seawater is affecting deep-sea animals. Seawater is becoming more acidic in many parts of the ocean as human-generated carbon dioxide in the atmosphere dissolves into the oceans.

Another experiment that will be hooked up to the MARS Observatory is a special low-light video camera called the Eye-in-the-Sea. Developed under the direction of marine biologist Edie Widder, this system illuminates the seafloor with a dim red light that is invisible to many deep-sea animals. When Widder placed an earlier version of this instrument on the seafloor in the Gulf of Mexico, it captured rare footage of deep-sea sharks and of a large squid that was entirely new to science.

A third experiment scheduled for attachment to the observatory is an ultra-sensitive seismometer that will help geologists better understand fault zones and earthquakes along the Central California coast.

The Monterey Accelerated Research System (MARS) allows scientists to perform long-term and real-time experiments 900 meters below the surface of Monterey Bay. The main MARS science node (orange pyramid) is connected to shore by a 52-km-long power and fiber-optic cable. MARS will serve as an engineering, science, and education test bed for even more extensive ocean observatories in the US and Canada. 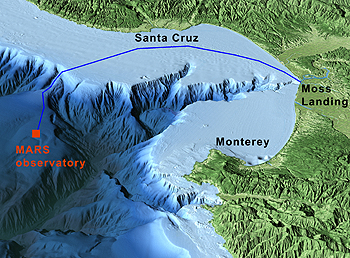 This computer-generated view of Monterey Bay shows the route of the MARS ocean observatory cable, which starts at the Monterey Bay Aquarium Research Institute in Moss Landing, California. The observatory itself (red square) is located on a sloping undersea plateau called “Smooth Ridge,” about 35 kilometers (20 miles) from shore and 900 meters (3,000 feet) below the sea surface.

The completed hub of the MARS observatory sits on the seafloor 900 meters below the surface of Monterey Bay. The cable to shore extends to the left side of the photo. Plugs for four of the eight experiments are visible inside the open doors of the protective steel frame. 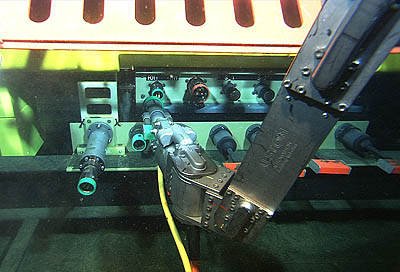 This photograph, taken by cameras on the remotely operated vehicle (ROV) Ventana, shows the ROV’s manipulator arm plugging the main data cable into the hub of the MARS observatory.

MARS operations manager Craig Dawe and MBARI engineer Gene Massion work on the central hub of the MARS Observatory in the MBARI test tank. Beneath the yellow float are two titanium cylinders containing the submarine equivalent of an electrical substation and a computer network switch box. 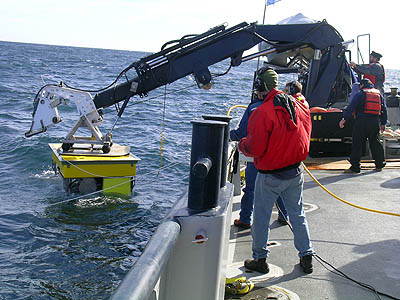 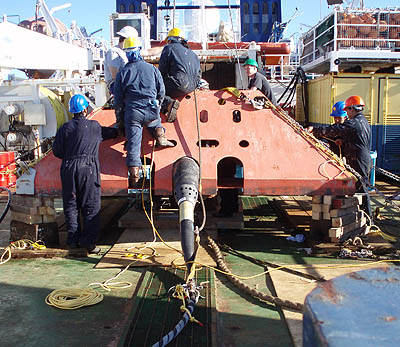 Crew members aboard the IT Intrepid launch the protective metal frame for the hub of the MARS observatory. This orange metal pyramid—about 4 by 5 meters (12 by 15 feet) across and 1.2 meters (4 feet) tall—protects the observatory electronics from damage due to anchors or fishing nets.