Cultivating bacteria in the deep sea 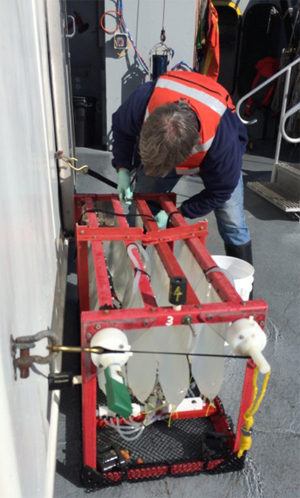 Bill Ussler, a senior research specialist at MBARI, is investigating techniques for cultivating bacteria in the deep sea. Attempts to cultivate deep-sea bacteria in the laboratory have generally failed because most the bacteria do not survive the transit to the surface and it is difficult to create incubation systems that mimic the deep sea. Bill designed an in situ microbial incubation system to circumvent these problems. Gas permeable bags are hung on a fiberglass frame (shown here on the deck of the R/V Rachel Carson). Six months ago, the frame was sent down to the seafloor where the ROV Ventana filled the bags with seawater. Bill added nitrate to the water in the incubation frame’s bags, in hopes of stimulating growth of bacteria that use nitrate as an energy source. Because it is thought that deep-sea bacteria are slow-growing, this frame was left on the seafloor for half a year. This experiment is located near MBARI’s MARS cabled observatory in Monterey Bay. Bill plans to connect future incubation systems to the MARS cable so he can manipulate and monitor the experiment remotely in real time.