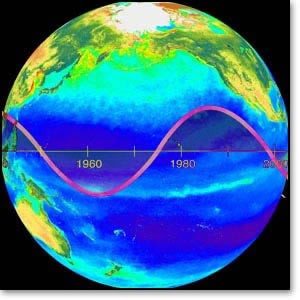 This week at the American Geophysical Union Ocean Sciences meeting in Portland, Oregon, MBARI scientist Francisco Chavez will present a plenary talk about natural climate fluctuations, such as El Niño, which span years to decades. These fluctuations can have profound impacts on the abundance of marine life and the cycling of important chemical elements such as carbon dioxide. Chavez’s 2003 publication in the journal Science on long-term climate cycles has become one of the most frequently cited geoscience papers of the last year.