In situ experiments in the deep ocean

The first scientific observations of deep-sea animals occurred during the Challenger expeditions, which began in 1872, when trawls of the midwater and deep seafloor brought up animals unlike those observed in shallower water. Since then, studies of deep-sea animals involved recovering them from trawls or collecting those that washed up on beaches, but the samples were often damaged or dead. It has only been in the last several decades that remotely operated vehicles have provided a window for in situ observations of these animals, plus the ability to test hypotheses. Henry Ruhl and Amanda Kahn are conducting in situ measurements and experiments with Ken Smith’s lab using the ROV Doc Ricketts as their eyes and hands underwater. 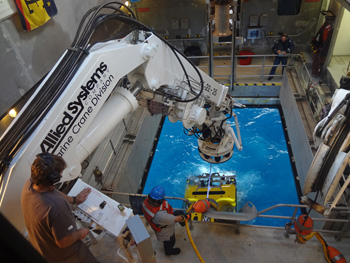 ROV Doc Ricketts was deployed from the moon pool in the center of the Western Flyer. It then descended 4,000 meters to the seafloor, acting as eyes and hands underwater for scientists. Photo: Amanda Kahn.

Henry Ruhl is studying the link between surface climate and deep-sea populations, with a focus on the function of the deep ocean as a carbon sink. He deployed respiration chambers that measure oxygen drawdown caused by a sea cucumber inside the chamber, a useful proxy for studying the amount of organic carbon (food supply) used by the animals he studies. During the two ROV dives, different species of sea cucumbers were put in the chambers so their respiration could be measured. These measurements would be impossible to do at the surface unless brought up in a pressurized tank—a sea cucumber could not survive the pressure and temperature changes associated with an ascent from such depths. 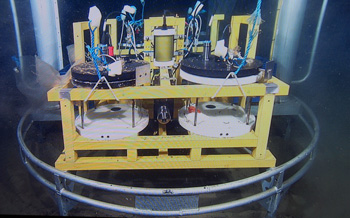 Respiration chambers seal in an animal in a given volume of seawater and measure the oxygen consumed over a certain period of time. Such measurements allow calculations of the amount of food used by the animal.

In addition to servicing the respiration chambers, the pilots of the ROV Doc Ricketts carefully recovered the chambers used to dye sponges for growth studies, collected more push cores of deep-sea sediments, and collected animals from Station M. Although it is one of the best-studied deep-sea areas in the world, one study conducted there found 17% of species collected to be new to science, so the potential for great discoveries remains. 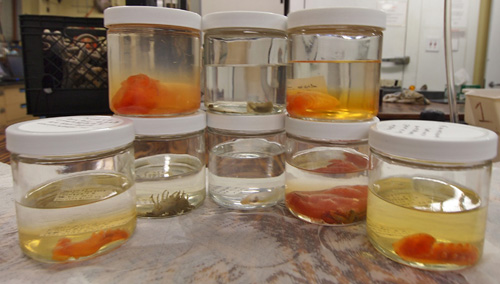 A diversity of sea cucumbers was collected during the dive. Some appear slightly different than known species, so all will be carefully studied to see whether any are new species. Photo: Carola Buchner.

At the same time the in situ experiments were occurring, the others busied themselves in turning around the sediment trap/camera tripod setup and the sediment event sensor (SES).  Long deployments require careful diagnostics and maintenance to go on when they do come to the surface, so turning those two moorings around has occupied the whole day. Two instruments remain on deck to be redeployed: the SES and the camera tripod setup. Likewise, two instruments have yet to be recovered from the seafloor: the free vehicle grab respirometer (FVGR) and the elevator with Henry Ruhl’s respiration chambers. All of these activities will occur beginning tomorrow at first light and will be conducted as quickly as possible: weather conditions have begun to deteriorate with noticeably larger waves and wind. 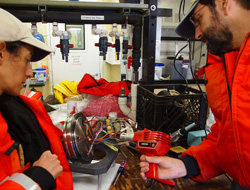 Alana Sherman and Paul McGill check components of the camera tripod to ensure it is ready for deployment tomorrow. Photo: Carola Buchner. 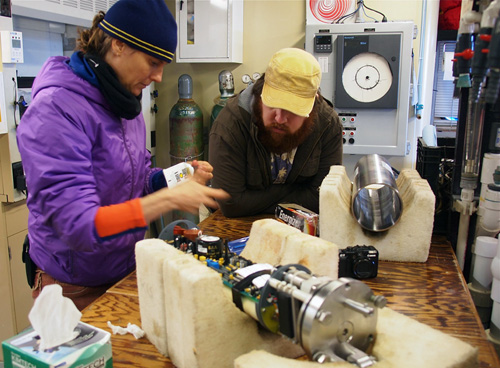 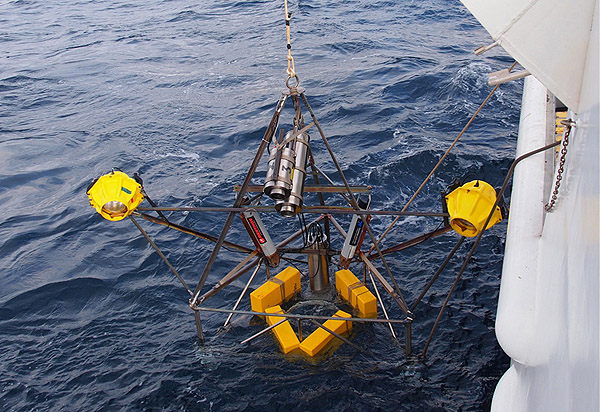