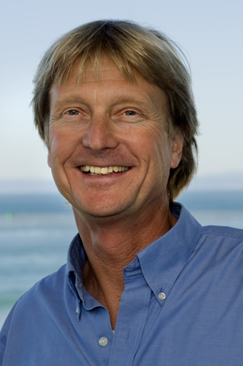 Molecular biologist Christopher Scholin has been appointed President and Chief Executive Officer of the Monterey Bay Aquarium Research Institute, the institute’s Board of Directors announced on November 3, 2009. Scholin, who most recently served three years as the institute’s Science Chair, replaces Marcia McNutt, who is leaving MBARI to become Director of the United States Geological Survey.

“Our Board is pleased to welcome Chris Scholin to the helm of MBARI, and we look forward to his continued outstanding leadership and contributions to ocean science and technology in his new role,” said MBARI Chair Julie Packard. “And of course, we are thrilled that Marcia will have the opportunity to bring her insights and leadership to Washington to help address the critical science and policy issues that will shape our future.”

Scholin first came to MBARI as a postdoctoral fellow in 1992. His research interests are centered on the use of genetic probes to detect a variety of waterborne microorganisms, in particular toxic and harmful algae. This has led to the development of the Environmental Sample Processor, a robotic laboratory that can perform chemical and genetic analyses beneath the ocean surface and send the results back to shore autonomously. Applications of this device have recently expanded to include detection of invertebrates as well as marine microbes in coastal and open ocean settings.

“The oceans are like the heart and lungs of our planet,” Scholin said. “They represent the largest habitat on Earth, yet we still have a great deal to learn about how they function and ultimately sustain life as we know it.

“David Packard founded MBARI nearly 30 years ago on the notion that studying the world’s oceans is best achieved by interdisciplinary teams of scientists and engineers and operations staff,” he said. “I look forward to working with the many talented people at MBARI to carry his vision into the future, particularly at this time when the oceans are central to our understanding of climate change.”

Scholin earned a Ph.D. in Biological Oceanography from the Massachusetts Institute of Technology/Woods Hole Oceanographic Institution Joint Program, an M.A. in Molecular Biology and Immunology from Duke University, and a B.A. with highest honors in Biology from the University of California, Santa Barbara. He lives in Pebble Beach with his wife and two sons.

MBARI looks forward to a new era of science and engineering partnerships under the direction of Chris Scholin.