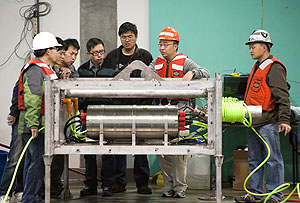 Members of the Chinese research team prepare the secondary junction box for their underwater observatory.

On April 21, 2011, after four years of planning, MBARI and a team of Chinese scientists and engineers installed a suite of ocean-observing instruments for testing in Monterey Bay. These instruments were hooked up to MBARI’s Monterey Accelerated Research System (MARS) cabled ocean observatory, about 35 kilometers (20 miles) from shore, in 900 meters of water. After several months of testing in Monterey Bay, components of this system will be installed on a long-term ocean observatory planned for the South China Sea.

The South China Sea observatory will be used to study marine ecosystems and biodiversity, tidal currents, earthquakes, and other seafloor phenomena. This project involves a number of Chinese research institutions and is supported by the Ministry of Science and Technology of the People’s Republic of China. It was initially proposed by a group of researchers from Tongji University, led by Huaiyang Zhou.

The Chinese test equipment in Monterey Bay includes a secondary junction box that routes data and electrical power from the main MARS science node to two instrument packages. All of the equipment is connected using seafloor cables that carry both data and power. 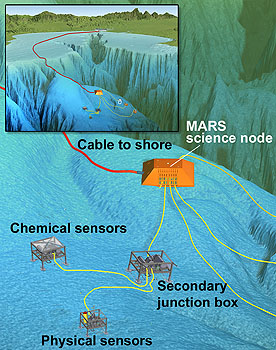 The installation of all this equipment on the deep seafloor required two research vessels, one remotely operated vehicle (ROV), and very delicate work by MBARI’s marine operations staff. To begin the installation, the crew of the research vessel Western Flyer lowered the lightest equipment package, containing current meters and related instruments, over the side of the ship, and allowed it to sink down to the seafloor. Then ROV pilots on board the research vessel Point Lobos flew ROV Ventana down to pick up the package and move it to an appropriate location near the MARS node. 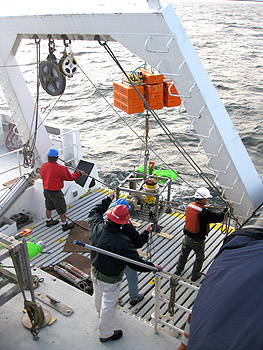 The crew of research vessel Western Flyer lower the current-meter package for the Chinese ocean observatory into Monterey Bay. © 2011 MBARI

This process was repeated for the chemical sensor instrument package. Throughout these two deployments, the ROV pilots had to be very careful to ensure that the tether for the ROV did not get tangled with the 900-meter-long wire coming down from the Western Flyer.

Within minutes of hooking up the instruments to the MARS science node, researchers on shore in Moss Landing were able to control their instruments and view the first data. They were excited to discover that all of the instruments survived the deployment process and appeared to be functioning well. 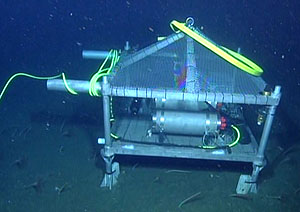 This frame grab from ROV video shows the seawater-chemistry instrument package that is part of the Chinese experiment on the MARS ocean observatory. The cable on the left connects to the secondary junction box. Image: © 2011 MBARI

The three instrument packages used in this experiment include a secondary junction box, a seawater chemistry monitoring system, and a system for monitoring currents and physical properties of seawater. The secondary junction box is attached to the MARS science node by a 40-meter-long cable on the seafloor, and serves a function similar to that of the MARS science node. It has 10 ports that can provide power and data for undersea experiments through separate seafloor cables.

The seawater-chemistry instrument package in this experiment measures seawater acidity as well as concentrations of chloride, sulfate, nitrate, oxygen, methane, and chlorophyll (an indicator of microscopic algae). The ocean-current package includes several types of current meters as well as instruments to measure water pressure, temperature, salinity, and turbidity. 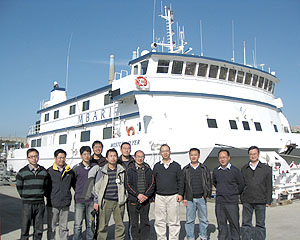 The team of Chinese researchers who came to MBARI to install and configure the Chinese test observatory pose for a group portrait in front of the research vessel Western Flyer. Image courtesy of Xiaotong Peng, Tongji University.

The recently deployed experiments will remain on the MARS observatory for about six months. This will allow the Chinese researchers to test both the functionality and durability of their equipment.

The MARS ocean observatory was originally built as a facility for testing equipment that would be used in other deep-ocean observing systems in the United States and Canada. MBARI is happy to see that the capabilities of MARS are appreciated and utilized by researchers from other countries as well.

November 28, 2019 – In a new paper in Science magazine, researchers describe an experiment that turned the seafloor cable on MBARI’s MARS ocean observatory into the equivalent of 10,000 seismic stations on the ocean floor.
Feb 18, 2016 - Researchers at MBARI have learned a lot about Monterey Bay using robotic submersibles to look deep below the bay’s surface. Now they can listen to the bay as well, using an ultra-sensitive underwater microphone.
On June 6, 2011 the ALOHA Cabled Observatory (ACO) "went live,"returning data from instruments on the deep seafloor, about 60 nautical miles north of Oahu, Hawaii, and 4,800 meters below the ocean surface. Funded by the University of Hawaii and the National Science Foundation (NSF), the ALOHA observatory uses a retired telecommunications cable to provide data and electrical connections for a variety of research instruments.