Why would anyone want to go to Antarctica in the middle of winter? Well, for one thing, it’s a good place to study icebergs. In December 2005, marine ecologist Ken Smith led a team that spent a month in Antarctica’s Weddell Sea, and came away with a new perspective on icebergs. Instead of just immense chunks of sterile ice, they found that some Antarctic icebergs are floating oases of life. In June 2008, Smith and his colleagues will be heading south again, this time to find out more precisely why icebergs attract so much marine life. 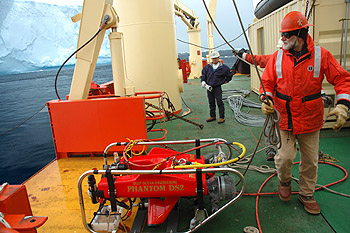 In 2005, MBARI researcher Ken Smith (at right) led an expedition to study life around Antarctic icebergs using a variety of tools, including this small remotely operated vehicle (ROV). Smith will be returning to Antarctica in June 2008 with an improved ROV and a host of other high-tech oceanographic instruments. Image: © 2005 Rob Sherlock

The cruise will take place in the Weddell Sea—a huge embayment in the Antarctic coastline, located more or less due south of the Atlantic Ocean. On its western side, the Weddell Sea is bounded by the 2,000-kilometer-long Antarctic Peninsula, which protects the sea from the full force of the Southern Ocean. Most of the Peninsula’s coastline is covered with glaciers. Where these glaciers flow into the sea, they form shelves of ice that can be dozens of kilometers wide and up to several hundred meters thick.

Over the last 50 years, however, the Antarctic Peninsula has warmed dramatically. In part because of this warming, the ice shelves along its shoreline have begun to break apart, releasing huge numbers of flat-topped, “tabular” icebergs into the Weddell Sea.

Smith’s research group is sailing into this iceberg breeding ground to study the marine life that thrives around the floating islands of ice. In addition to studying the animals that live on and around the icebergs, the team will also survey the icebergs themselves, using radio-controlled planes, a robotic submarine, and ship-mounted radar and sonar systems. 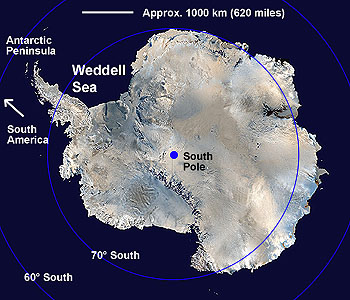 This composite satellite image shows Antarctica, the Antarctic Peninsula, and the Weddell Sea. At its widest, the Weddell sea is about 2,000 kilometers (1,250 miles) across. Image courtesy of NASA

Much of the team’s research will focus on the undersides of the icebergs, where bits of rock and sediment are released into the ocean as the icebergs melt. Iron and other materials in this sediment apparently act as a fertilizer for algae in the seawater around the icebergs. These algae support vast numbers of microscopic animals, as well as krill and small fish. These small marine animals, in turn, are eaten by larger animals, from penguins to blue whales.

During their 2008 cruise, Smith’s research team hopes to estimate the amounts of nutrients being released by different icebergs into the surrounding ocean. They will also study how rapidly algae take up these nutrients and use them (along with carbon dioxide from the surrounding seawater) for photosynthesis. The next step is to understand how much organic matter from the algae is being consumed by different types of marine animals. Finally, the researchers will try to measure how much of this organic matter (which is mostly carbon) is sinking to the seafloor. This is an important question because when organic carbon (in the form of dead algae and animals) sinks to the deep seafloor, it helps remove carbon dioxide from the Earth’s atmosphere, and thus could help mitigate global warming.

To achieve these ambitious goals, Smith and his collaborators have developed a variety of new, high-tech research tools. For example, they are taking two radio-controlled airplanes. MBARI researchers Steve Etchemendy and Kim Reisenbichler will use tiny cameras on these planes to photograph the tops of the icebergs, looking for crevasses, melt-water lakes, and bird life. The planes will also drop small Global Positioning System (GPS) beacons on individual icebergs so that the researchers can track the icebergs as they drift across the Weddell Sea. 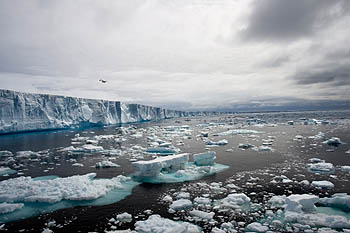 During their 2005 cruise to the Weddell Sea, Smith’s team studied this very large iceberg, which was about five kilometers (three miles) wide and 21 kilometers (13 miles) long. Smith and his fellow researchers found zones of abundant marine life around both large icebergs such as this one, and around smaller bergs that were only a few kilometers across. Image: © 2005 Rob Sherlock

To study how much sediment the icebergs are releasing, MBARI researchers and engineers built a small fleet of robotic “sediment traps.” As their name implies, sediment traps are large funnels that oceanographers place in the ocean to catch sediment and particles of organic material drifting down from the surface waters. Unlike most sediment traps, which are attached to the seafloor, Smith’s “Lagrangian” sediment traps are programmed to sink to a particular depth, drift underneath an iceberg, then rise to the surface after a specified period of time (which must be long enough that the sediment trap will have drifted out from underneath the iceberg by the time it surfaces). Designing and programming these sediment traps was a tricky process, which required months of work by MBARI engineers Brett Hobson, Alana Sherman, and Paul McGill. 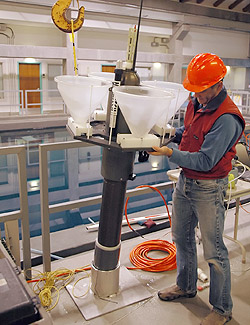 MBARI engineer Brett Hobson works on one of the “lagrangian sediment traps” that will released into the ocean to drift underneath Antarctic icebergs. The white funnels will collect sediment and organic matter that is released as the icebergs melt. Image: Todd Walsh (c) 2007 MBARI

To get a close look at the undersides of the icebergs, marine biologists Bruce Robison and Rob Sherlock will be using a small remotely operated vehicle (ROV). This robotic submarine—the Phantom DS2—was used previously during Smith’s 2005 expedition (see photo at beginning of this article), but was given a major upgrade for this project (see photo at end of article).

The “hot-rodded” ROV also sports two additional thrusters (propellers) and a longer (670-meter) control cable, so it can travel farther under the ice. Instead of a front “grill,” the ROV has a plankton net for collecting tiny algae and animals. MBARI technicians also added a scraper for collecting algae directly off the ice itself. Because they could not add additional channels to the ROV’s remote control system, the MBARI team had to find ways to activate many of their new tools using specific movements of existing systems such as its mechanical arm and camera pan-and-tilt mount. 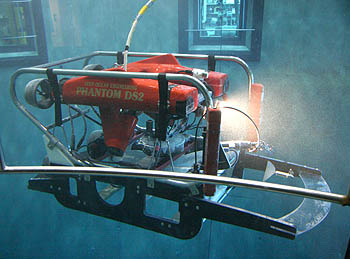 This photograph shows the Phantom DS2 remotely operated vehicle, with some of the new tools that were added for the 2008 expedition (compare with 2005 photo above). This photograph was taken while the vehicle was being tested in MBARI’s Test Tank. Image: Kim Reisenbichler (c) 2008 MBARI

In addition to scientists and engineers, Smith has invited on board a writer, Nancy Etchemendy, to document the expedition. An award-winning children’s book author, Etchemendy has already begun writing two internet “blogs”—one for the general public and a second that incorporates fictional characters, and is aimed at kids ages 8 to 12. These blogs will give the public a first-hand perspective on the joys and challenges of conducting research from an icebreaker in the middle of winter. They will also allow readers on shore to ask questions about the cruise as it progresses.

Smith and his team depart for their Antarctic expedition from Punta Arenas, Chile, on May 31, 2008, and return about one month later, on June 30. In scheduling this ambitious project, Smith did not actually choose the depths of Antarctic winter. In fact, this was the only time period during 2008 when the 300-foot research icebreaker Nathaniel B. Palmer was available. However, as Smith points out, it is important to know how iceberg ecosystems work in winter as well as in summer.

With such a creative and dedicated team, Smith will no doubt come back with plenty of scientific data and fascinating observations. As a sequel to Smith’s 2005 expedition, this cruise will not only give scientists new perspectives on Antarctic icebergs, but could also shed light on larger issues, such as global climate change.

On December 9, 2008, a team of MBARI researchers installed the first major science experiment on the new MARS ocean observatory, almost 900 meters below the surface of Monterey Bay. This project, known as the Free-Ocean Carbon Enrichment experiment, will help researchers study the effects of ocean acidification on marine organisms.
Off the coast of Central California, in the inky darkness of the deep sea, a bright orange metal pyramid about the size of two compact cars sits quietly on the seafloor. Nestled within the metal pyramid is the heart of the Monterey Accelerated Research System (MARS)—the first deep-sea cabled observatory offshore of the continental United States.
t is common knowledge that the world's oceans and atmosphere are warming as humans release more and more carbon dioxide into the Earth's atmosphere. However, fewer people realize that the chemistry of the oceans is also changing—seawater is becoming more acidic as carbon dioxide from the atmosphere dissolves in the oceans.