A dense array of sensors ( more than 50) were deployed for three consecutive six-month periods from October 2015 to April 2017 within Monterey Canyon. Traditional moorings with instruments strung between floatation packages and anchors (railroad wheels) were deployed. Additionally, instruments were mounted on platforms and deployed on and buried in the seafloor. These instruments monitored conditions in the water column and  near the seafloor. 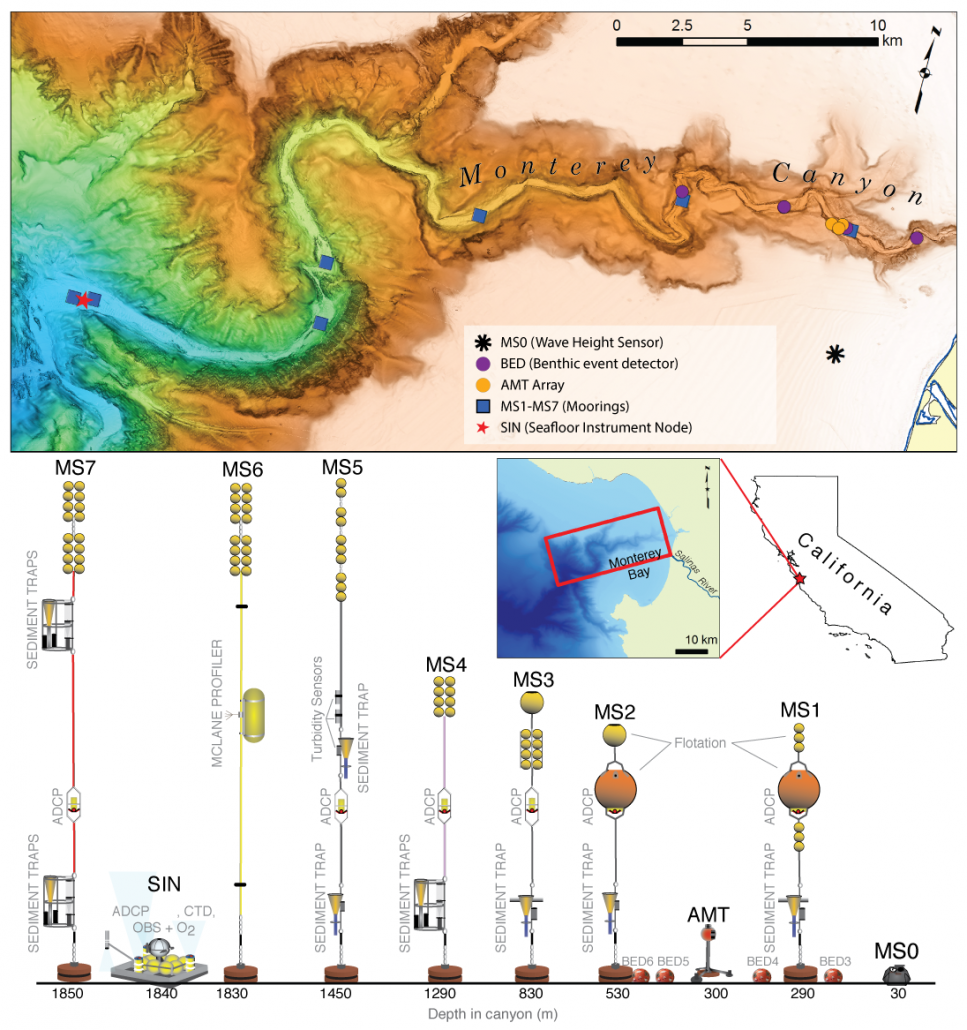 Map and illustration show the locations and depth of the instruments deployed in Monterey Canyon as part of the Coordinated Canyon Experiment (CCE). The number of instruments mounted on the moorings and their configuration varied slightly between the three deployments. 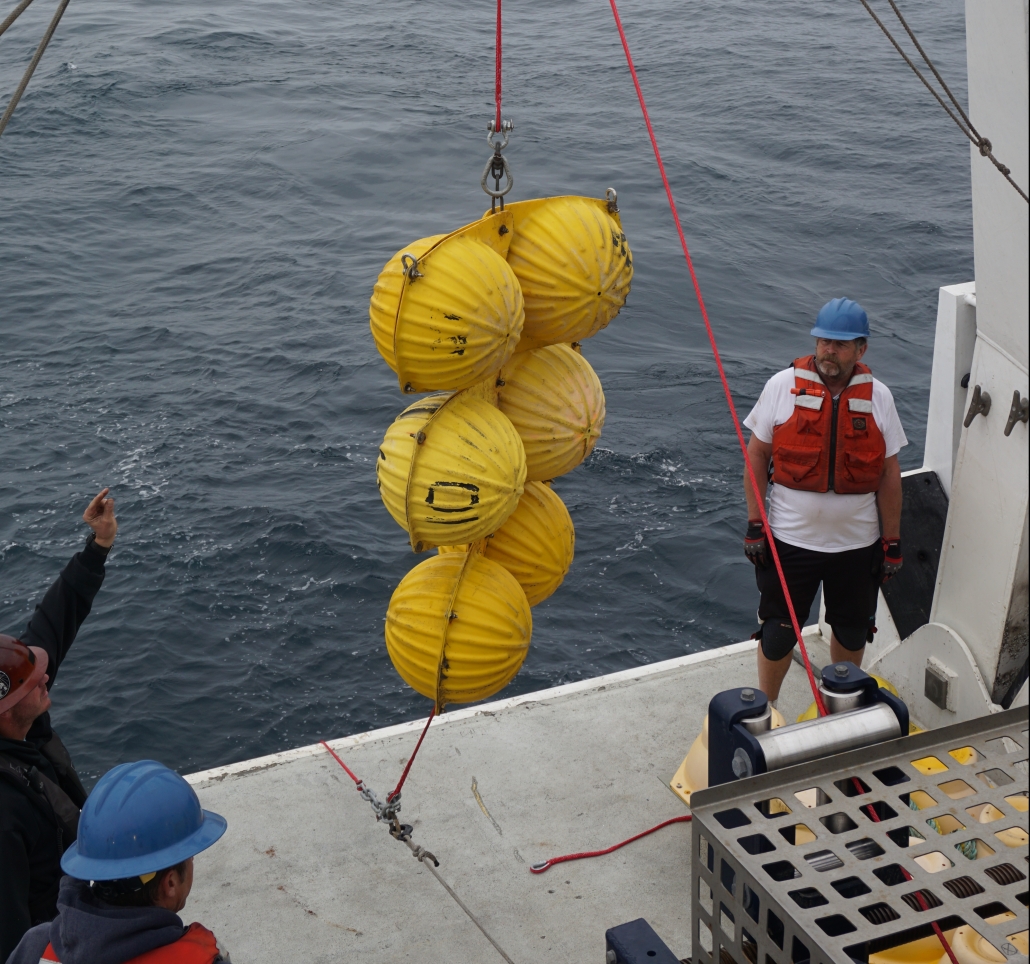 Floats are deployed on mooring.

Six moorings were deployed at depths of 280 to 1,850 meters water depth in Monterey Canyon. Instruments on each mooring were suspended at various depths above the seafloor. Typically, instruments deployed on the moorings were: acoustic Doppler current profilers (ADCP), sediment traps with intervalometers to mark time (sediment trap methods), turbidity sensors, CTDs (conductivity, temperature, and depth sensors), and optical backscatter sensors. 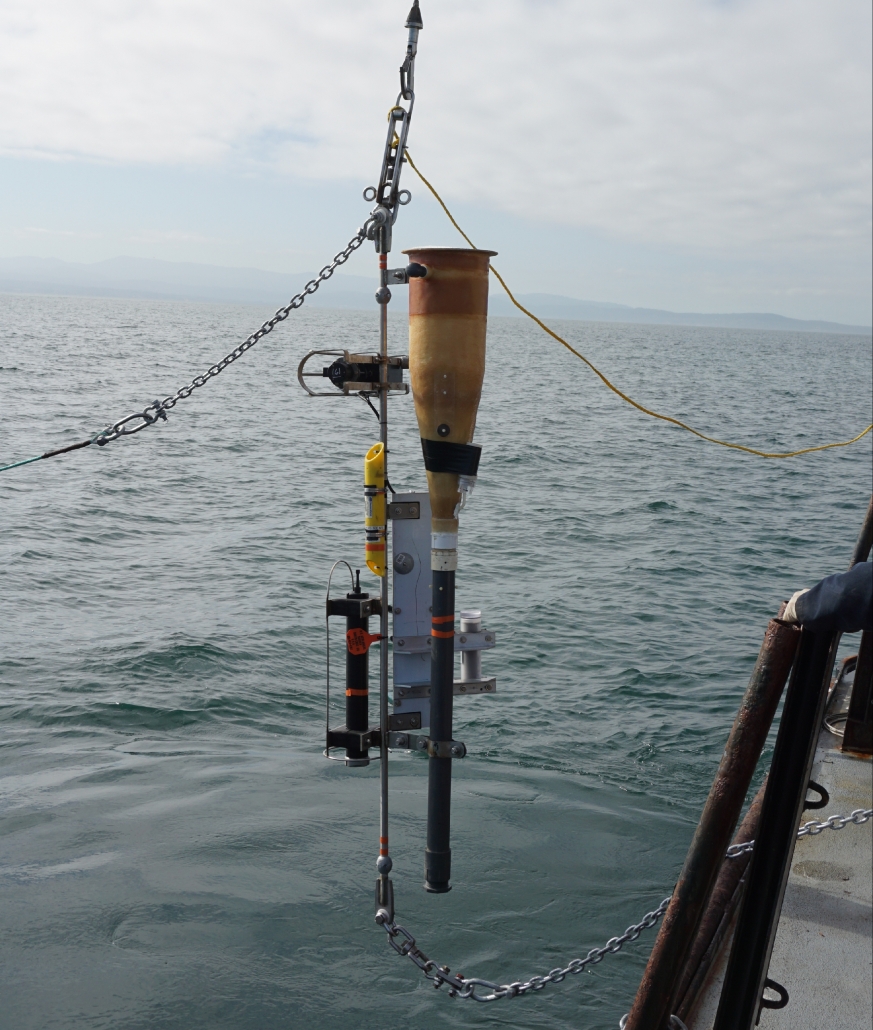 Sediment trap with CTD and turbidity sensors are deployed on mooring in Monterey Canyon.

Anderson sediment traps are designed to passively collect particulate material as it settles from the water column into a tube.  This effectively provides a record of the sediment and particulate matter passing through the water column.  After recovery these tubes can be logged with a multi-sensor core logger, and subsequently extruded, and sampled. These sediment traps were deployed on moorings MS1, MS2, MS3, MS4 MS5, and MS7 (see map and illustrations above for locations). 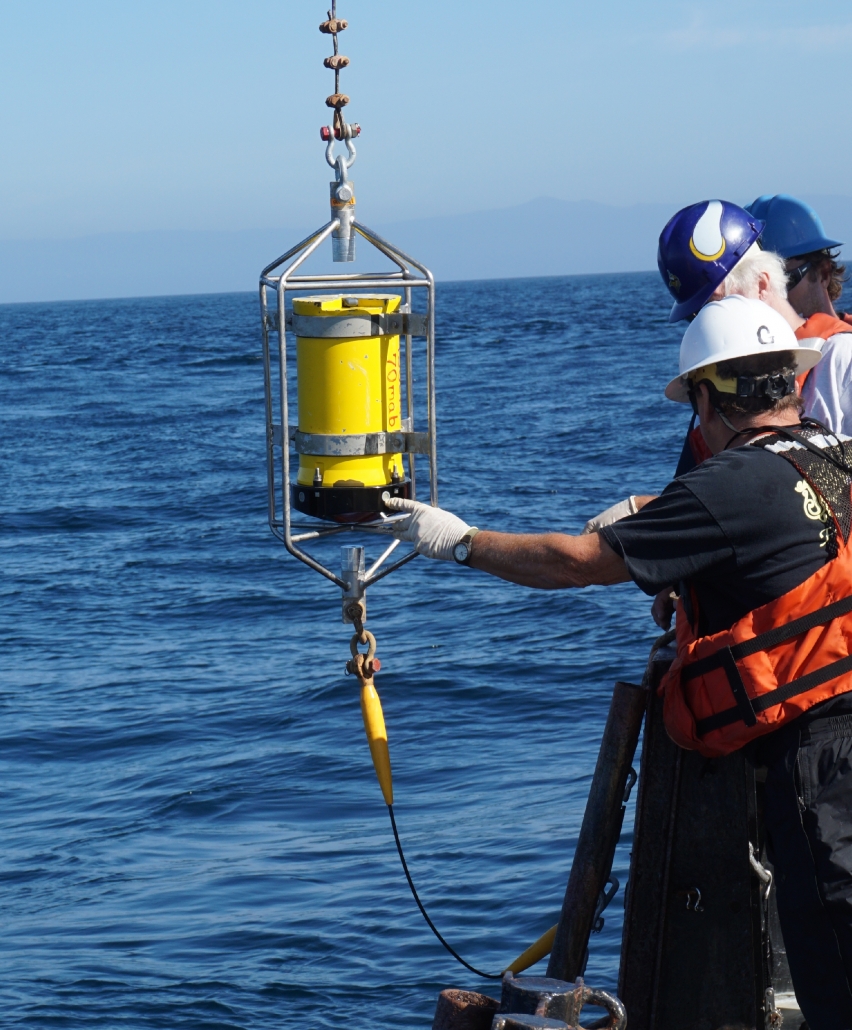 An ADCP deployed on a mooring line.

ADCPs measure a profile of current velocity and acoustic backscatter in the water column. They were the backbone of the entire experiment. One was suspended approximately 65 meters above the seafloor looking downward on each of the moorings. All ADCP’s deployed on the moorings were 300 kHz RDI Workhorse Sentinels. 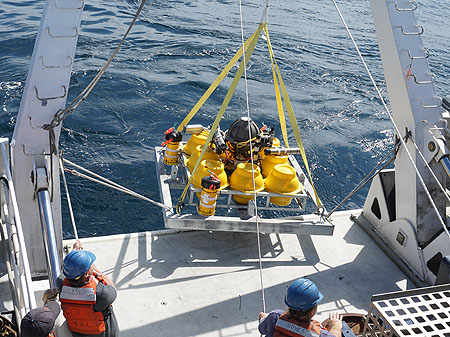 SIN is deployed off the R/V Western Flyer.

A seafloor instrument node (SIN) was deployed at a depth of 1,840 meters. The SIN featured three ADCPs (RDI Workhorse Sentinels) of 300, 600 and 1200 kHz frequencies, looking upward from the seafloor and recording data continuously on a common time base. This platform also contained instruments that measured water temperature, salinity, turbidity, and oxygen concentrations at the seafloor. 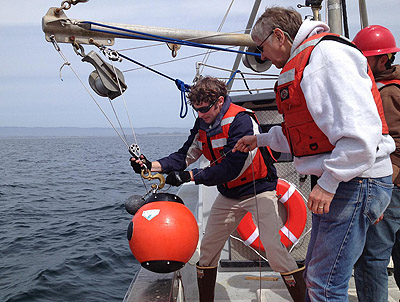 Deploying a BED in Monterey Bay.

Several BEDs were deployed partially buried in the canyon floor between 208 to 516 meters water depth. BEDs are designed to be carried down-canyon within sediment gravity flows. BEDs recorded acceleration, rotation and pressure as a function of time as they are transported in the flow. 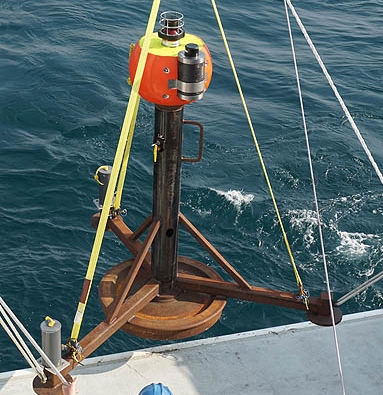 AMT, mounted on a 800 kilogram tripod frame, is deployed in the canyon axis with BED sensor strapped to the side.

An array of three Sonardyne AMTs were placed in Monterey Canyon to monitor seafloor movements. One instrument was placed at 300 meters water depth in the canyon axis and the other two on stable benches on the canyon sides. Each AMT measured the distance to the other instruments as well as recording pitch, roll, temperature, and depth. 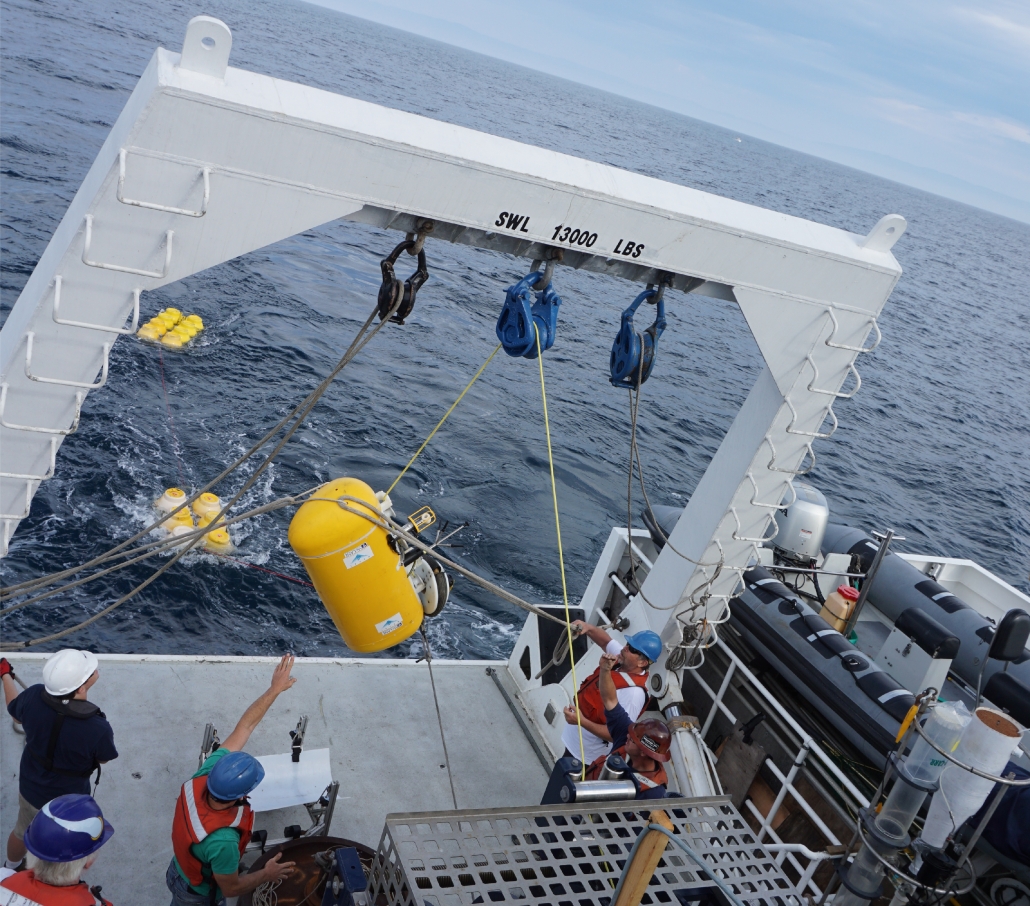 McLane profiler is deployed off the R/V Western Flyer.

A vertical McLane profiler was deployed on mooring MS6 at a depth of 1,830 meters. This automated instrument package crawled along the mooring cable, traveling between 7 to 507 meters above the seafloor every 4.5 hours collecting continuous profiles of temperature, current velocity, salinity, depth, and optical backscatter on each of these 30-minute runs. 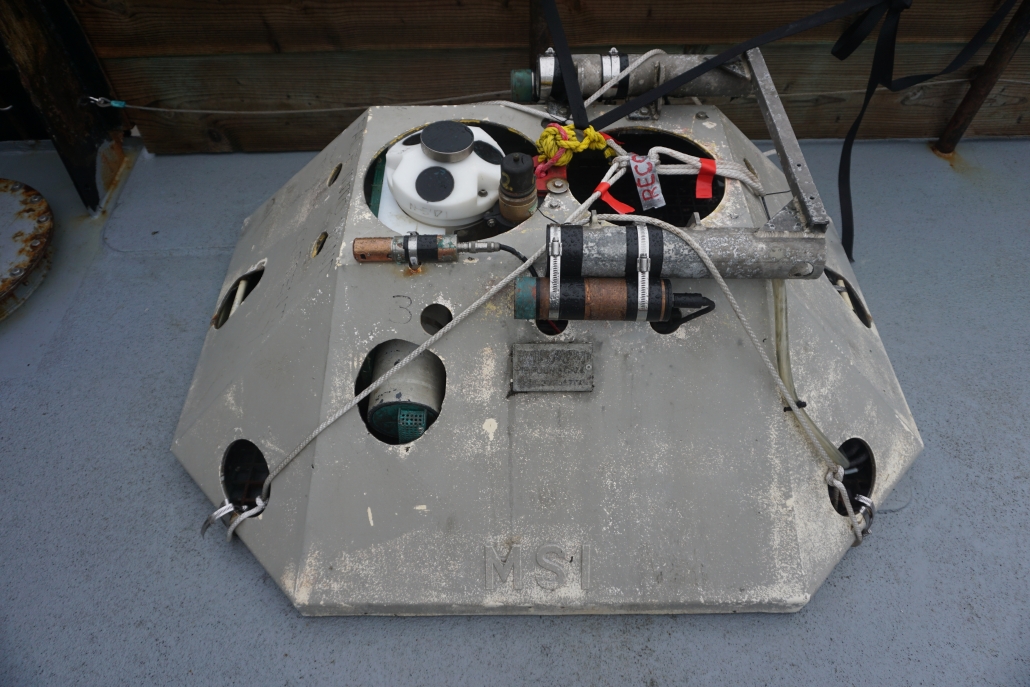 MS0 ready to be deployed.

MS0 is an instrument package designed to carry a wave height and current velocity sensor (600 kHz Nortek AWAC). It was deployed in 30 meters water depth on the continental shelf outside the canyon, and also carried instruments that measured, conductivity, temperature, oxygen fluorescence, and optical backscatter. 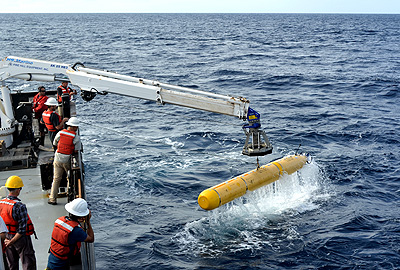 A mapping AUV is recovered after a mapping mission in Monterey Canyon. 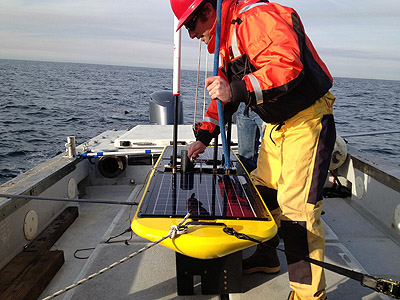 Wave Glider gets a last check before deployment.

Wave Gliders
Wave Gliders are essentially robotic, self-propelled surfboards. During the CCE they were used to locate instruments and serve as mobile hot spots to download data from seafloor instruments (i.e., BEDs, AMTs and SIN). 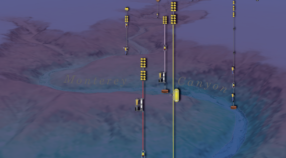 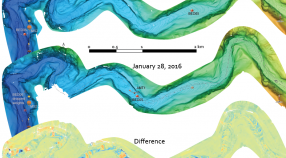 An MBARI based team led by Charlie Paull and Brian Kieft created a "smart boulder"—a motion-sensing instrument that can be placed within the sediment or on the canyon floor. This device, called a benthic event detector (BED), can record its motion as it moves down-canyon, providing detailed data on when an event occurred, how far and fast it moved, and the nature of its motion.

The MBARI mapping AUV is a torpedo-shaped vehicle equipped with four sonars that operate simultaneously during a mission to map the seafloor autonomously. The sonars are a swath multibeam sonar, two sidescan sonars, and a sub-bottom profiler.
Datasets hosted by MGDS have their own DOI and can be cited individually.