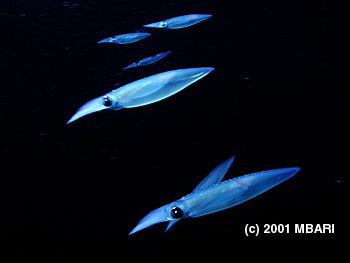 Market squid (Loligo opalescens) are currently the largest commercial fishery in California, yet scientists know little about the early life history of these heavily-fished animals. A new research technique developed by MBARI postdoctoral fellow Louis Zeidberg promises to help fill this information gap by allowing researchers to identify and estimate the sizes of juvenile squid using underwater video or photographs. Such information could be useful in managing this multi-million-dollar fishery.

Zeidberg’s initial work with market squid involved several field studies on the distribution of juvenile squid in Southern California. In 2001 he began examining underwater video footage of the squid taken by MBARI’s remotely operated vehicles. However, in looking at the underwater video, he found it difficult to tell the difference between small animals that were close to the camera and larger animals that were farther away. To address this problem, Zeidberg devised an ingenious method for estimating a squid’s total length based on the relative size of its eyes and mantle. (The mantle is the tube-shaped part of the squid’s body that is sliced into rings for many calamari dishes.)

Like human infants, young market squid have eyes that are large relative to the size of their bodies. As these animals mature, their bodies grow faster than their eyes, until eventually they reach adult proportions. By measuring over 150 squid of different ages, Zeidberg was able to create a mathematical formula that described how the squids’ eye-to-mantle proportions related to the animals’ overall body length. This type of size analysis, known as allometry, has been used in many other biological studies, but this is the first time it has been used to quantify the size of marine animals in their native environment.

At first Zeidberg didn’t know which part of the squid’s body would provide the most useful allometric measurements. So he examined 157 juvenile and adult market squid, recording their overall body lengths as well as the sizes of their heads, eyes, funnels, mantles, fins, arms, and tentacles. Eventually he decided that the diameter of a squid’s eye and the length of its mantle would be most useful for his analysis, because these body parts are easy to see and are relatively incompressible, unlike much of the squid’s body. 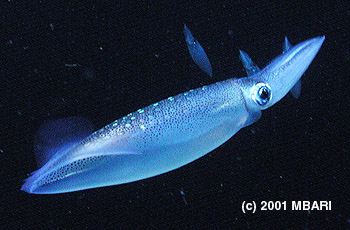 In this close-up view of a market squid you can clearly see the squid’s mantle—the spotted, tube-like structure to the left of the eye. Zeidberg showed that the total length of a squid can be estimated by comparing the length of its mantle to the diameter of its eye. Photo: (c) 2001 MBARI

Armed with his allometric formula, Zeidberg set out to determine the sizes of market squid observed by the video camera on MBARI’s remotely operated vehicle Ventana. Using still frames from 26 video clips taken during four night dives, he measured the eye diameter and mantle length of each squid that was close enough to the camera to be seen in adequate detail. After he had estimated the squid’s size, he was able to tell with reasonable certainty whether that squid was was a juvenile or an adult. He also performed additional analyses, such as determining how fast the squid was swimming (relative to its body length) by comparing its position in sequential video frames.

Being able to differentiate juvenile from adult squid helped Zeidberg obtain new information about the distribution and behavior of these animals. For example, his observations suggest that young squid live close to shore, over the continental shelf, in waters less than 100 meters deep. Larger animals seem to live farther offshore, staying about 500 meters below the surface during the day but migrating up toward the surface each night.

Zeidberg’s video studies also suggest that market squid can swim about 50% faster than previous (laboratory) studies had indicated. Knowing the squids’ swimming speed may seem like a trivial finding, but such information can sometimes be very important in fisheries monitoring. For example, the higher cruising speeds that Zeidberg measured in market squid suggest that these animals are capable of long-distance migrations along the California coast.

Although this study used frame grabs from video, Zeidberg is quick to point out that the allometric technique he developed could be used with any still image of market squid that is detailed enough to show the animal’s mantle and eye. He also suggests that the technique could be very useful in studying other marine animals, such as fish. For example, if appropriate allometric size ratios could be determined, researchers might be able to estimate the ages of fish photographed during field studies of rocky bottom habitats or coral reefs. Similarly, the sizes and ages of individual salmon could be determined from photographs taken as the fish swim through glass-walled fish ladders.

Zeidberg’s work will be published in an upcoming issue of the Journal of Experimental Biology (see citation below).