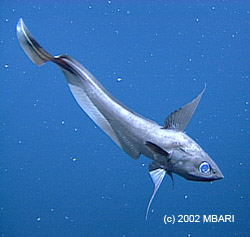 The hyperbaric fish trap is designed to bring deep-sea fish, such as this rattail (Coryphaenoides acrolepis) to the surface without damage from decompression. Photo: (c) 2002 MBARI

Using cutting-edge materials and engineering, MBARI collaborator Jeff Drazen has built a better fish trap. Of course human beings have been building fish traps for thousands of years, but this one is different. It is a high-pressure (hyperbaric) fish trap, designed to bring deep-sea fish back up to the surface alive.

Oceanographers have hauled fish up from the depths ever since the Challenger Expedition in the 1870s. But most deep-sea fish die when brought to the surface because their air bladder expands until it causes internal bleeding or organ damage. These days marine biologists can observe deep-sea fish in their native habitat using manned and unmanned submersibles. But scientists have yet to answer some of the most basic questions about these animals, such as how they can survive on the low oxygen concentrations and infrequent meals available in the deep sea.

Drazen and MBARI scientist Jim Barry hope to use their deep-sea fish trap to measure the respiration (breathing) of deep-sea fish in order to understand their metabolism (the rate at which they use energy). They also hope to determine how sensitive these fish are to changes in pressure, as well as changes in carbon dioxide concentrations. 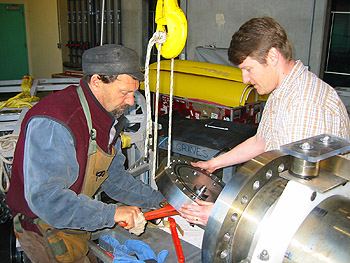 This is not the first time that oceanographers have tried to bring deep-sea fish to the surface alive. In the mid-1980s, Ray Wilson at the Scripps Institution of Oceanography built a steel trap that brought fish up the surface, but most died on the way up or shortly after arrival. The Scripps trap had a tiny window, so researchers could see the fish, but they couldn’t do much else with the animals. The trap was eventually lost at sea and Wilson went on to other projects.

Drazen, now at the University of Hawaii, decided to tackle the fish-trap project while working with Barry as a postdoctoral fellow at MBARI. After talking with Wilson about his experience, Drazen started designing his own trap, adding a small video camera and state-of-the-art sensors to measure the fish’s breathing and metabolism. To address the many technical challenges in designing and building the trap, he worked closely with MBARI mechanical engineering technician Larry Bird. As Drazen put it, “Larry took some of my ideas, and with his ingenuity made them work—better than I ever could have. Without Larry’s ideas and designs this trap would never have been built.”

In order to bring a deep-sea fish up to the surface alive, all you need is a container strong enough to hold water under 400 atmospheres pressure. However, in order to withstand this sort of pressure, the container must have stainless steel walls 5-8 centimeters (2-3 inches) thick. If you ignore all the sensors and valves, Drazen’s trap looks relatively simple—it is a two-meter (six-foot) stainless steel cylinder with heavy bolted end caps. One of the end caps is fitted with a door that opens inward. A 1.25-centimeter (half-inch) hook dangles out of the open door at the end of a spring-loaded steel cable. When a fish takes the hook, the spring-loaded cable jerks back into the trap, hauling the fish inside. The door snaps closed behind it. That’s the theory anyhow. 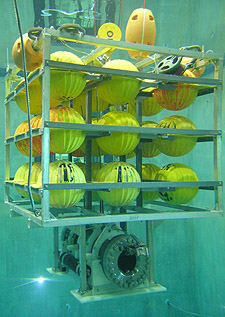 Before deploying the hyperbaric fish trap in the ocean, Drazen tested it in the MBARI test tank, as shown in this photo. The stainless steel cylinder at the bottom of the photo is the trap itself. Above it is an aluminum frame containing 27 yellow floats, which make the entire assembly positively buoyant. Photo: Kim Fulton-Bennett (c) 2004 MBARI

Once a fish is inside the trap, the next challenge is to get the 680-kilogram (1,500-pound) trap back up to the surface. To lift this much weight up from the bottom, Drazen mounted the trap beneath a frame that holds 27 spherical glass floats. These floats are protected by yellow plastic shells (see photo above), and provide just enough buoyancy to lift the fish trap slowly up through the water.

In order to deploy the trap on the sea bottom, the researchers must attach iron ballast to the underside of the of the trap assembly so that it will sink. When the trap is sprung, it automatically releases a small float, which rises to the surface as a signal to the researchers. The researchers then send a pulse of sound down through the water to release the ballast, which allows the trap to rise back up to the surface under its own buoyancy.

After several planned field tests that were cancelled due to bad weather, Drazen deployed his trap for the first time in March 2004. But as all fishermen know, there’s a big difference between going fishing and actually catching a fish. In this case, a fish stole the bait and sprung the trap without getting pulled inside. Nonetheless, all of the other components of the system worked perfectly, allowing Drazen to recover the trap and try again. Over the next few months, Drazen refined his hook and capture mechanism. In mid May, he got his first fish back alive to lab, but it died after about 48 hours.

In October 2004 Drazen tried a new strategy that would be the envy of many fishermen. He first deployed the fish trap, then sent MBARI’s remotely operated vehicle (ROV) Ventana down to take a look at it. To his surprise, a fish had taken the hook, but had not yet sprung the trap. In a very delicate operation, the ROV pilots used the ROV’s manipulator arm to spring the trap, pulling the fish (a grenadier or rattail fish) inside.

After recovering the trap and returning it to the lab, Drazen and Barry measured changes in oxygen concentration within the trap to determine how much oxygen the fish was consuming. They also tested the animal’s ability to withstand changes in pressure. This time they were able to keep the fish alive for about 80 hours of experiments.

Based on their ROV and laboratory observations, Drazen and Bird are continuing to refine their hyperbaric fish trap, and will deploy it again in December 2004. Already they have obtained data that will add significantly to our meager understanding how fish survive in the challenging environment of the deep sea. Over time, their work may also help determine whether these fish will be able to survive changes in their environment due to human activities.

Work on the hyperbaric fish trap was funded in part by the U.S. Department of Energy, Ocean Carbon Sequestration Program, Biological and Environmental Research Grant No. DE-FG03-01ER63065.