Bone-munching worms from the deep sea thrive on fish bones. 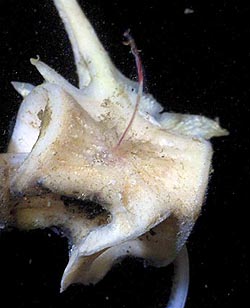 This close-up view shows a fish vertebra (part of the backbone) that was left on the seafloor of Monterey Bay for five months. A single red Osedax worm can be seen growing up out of the center of the bone. Image: © 2010 Greg Rouse

A new study by scientists at MBARI, Scripps Institution of Oceanography, and Occidental College is painting a more complete picture of an extraordinary sea worm that makes its living in the depths of the ocean on the bones of dead animals.

Discovered fewer than 10 years ago off Monterey, California, but since identified in other oceans, the flower-like marine “boneworms,” or Osedax, have been documented mainly living upon whale carcasses that fall to the ocean floor, leading some scientists to argue that Osedax specializes in whale bones. But Scripps Professor Greg Rouse, along with colleagues at Occidental College and Monterey Bay Aquarium Research Institute (MBARI) wondered: Do Osedax boneworms also live on the bones of non-mammals?

To assess the question, the researchers carried out an experiment, which is described in the April 13 online edition of Biology Letters, a Royal Society journal. The team employed MBARI’s remotely operated vehicles Ventana and Doc Ricketts to deploy tuna and wahoo bones, as well as shark cartilage, inside wire cages at approximately 1,000-meter (3,280-foot) depth off Monterey, California. When the researchers retrieved the cages five months later, they found Osedax living on the fish bones, although the shark cartilage had already been eaten by unknown organisms.

“We weren’t sure that Osedax boneworms would be able to settle on fish bone and to grow to maturity and breed. When it actually turned out that we could establish all these things it was very satisfying,” said Rouse. “That we actually found three different Osedax species living on the fish bones was a further bonus. The finding shows that Osedax boneworms are not whale bone specialists, but are arguably generalists and able to exploit a variety of vertebrate bones.”

The finding also lends support to a hypothesis they have previously proposed that Osedax and its bone-eating lifestyle may have evolved millions of years ago during a time known as the Cretaceous period, well before the dawn of marine mammals.

“These bone-eating worms may have expanded their feeding niche several times to exploit the bones of large marine vertebrates as they successively colonized the world’s oceans from land,” say the authors in the paper. 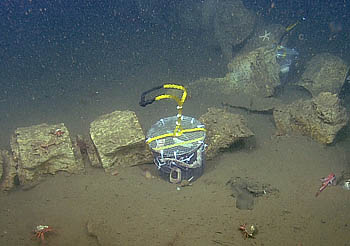 In May 2010, this metal cage containing fish bones was placed near the remains of a whale carcass in Monterey Bay. The fish bones were placed in a cage so that they would not be eaten by large scavengers. After five months, some of the fish bones had been colonized by Osedax worms. Image: © 2010 MBARI

The scientists say Osedax’s ability to exploit non-mammalian bones could be an ancestral trait: “We suggest that whalebones are but one in a long series of food sources that Osedax has exploited and continues to exploit.”

“Our experimental studies at MBARI have identified 17 species of Osedax from various depths in Monterey submarine canyon,” said MBARI’s Bob Vrijenhoek, a paper coauthor. “We now know that the worms are capable of subsisting on a variety of bones from cows, pigs and seals, but this new discovery of Osedax on fish bones forces us to take a fresh look at their nutritional limits and evolution.”

The team now plans to further study the possible use of shark remains by Osedax and describe and further understand a host of new species of boneworms they have discovered off Monterey. They also plan to study how the worms actually eat into bone.

In addition to Rouse and Vrijenhoek, coauthors of the study include Shana Goffredi of Occidental College and Shannon Johnson of MBARI. Funding for the study was provided by the David and Lucile Packard Foundation (through MBARI) and Scripps Institution of Oceanography.

December 7, 2020 – MBARI scientists confirm the first evidence of bioluminescence in a sponge, showing that the sponges contain the chemicals necessary to make light within their bodies.
Nov 23, 2020 – Researchers recently discovered the largest aggregation of fishes ever recorded at abyssal depths (below 3,000 meters or 9,800 feet) in the ocean.
August 14, 2020 – Today the New York Times ran an editorial highlighting the potential effects of deep-sea mining on midwater animals.