Benthic Rover recovered after three years in the deep sea 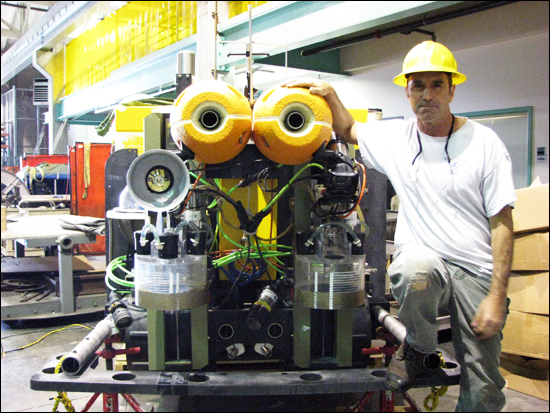 The Benthic Rover slowly creeps along the seafloor, settles at a random study site for two to three days, and then moves along to the next site approximately ten meters away. The Rover was built by a team of MBARI engineers and scientists, led by Ken Smith and Alana Sherman, to measure oxygen consumption of benthic, or seafloor, organisms as a way to understand the supply and demand of carbon in the ocean’s deepest waters. While the rover drives to each new site, built-in cameras survey the area and capture images of the seafloor. Two respirometer chambers are inserted a few centimeters into the sediment to measure the amount of oxygen consumed by the organisms contained in the chamber. The respiration rate helps scientists approximate the amount of food (carbon) the seafloor community is consuming. These data combined with those measured with other nearby instruments will help scientists understand how climate change affects the ability of seafloor organisms to obtain food in the deep ocean.

Earlier this month, the Benthic Rover was recovered for maintenance after three years of nearly continuous deployment on the seafloor at Station M, located about 220 kilometers (140 miles) off the coast of central California, at a depth of 4,000 meters. Moving parts, along with cables and connectors, will be serviced or replaced as needed. One of the most important upgrades is the installation of a redesigned hibernation board that conserves battery power in the field. The Benthic Rover will be redeployed in October.