We were all excited about today’s exploration dive on Sur Ridge, a ten-mile-long submarine ridge about 20 miles due west of Pt. Sur, on the California coast. No task list to complete or specific objectives to achieve. This was like exploring the hills with your friends,except today, the “hills” were 1,000 meters under the surface, and had never been explored by anyone.

The remotely operated vehicle (ROV) Doc Ricketts was launched during a spectacular sunrise at about 6:20 a.m. Only an hour later, the ROV landed on the bottom as we crowded the ROV control room to watch the video. There have only been a couple of ROV dives on Sur Ridge, and none in the area we were diving—so this was unexplored territory. Not a human eye in history has seen the bottom here.

We selected our dive site based on the best bathymetric map (map of the depth of the seafloor) of the area, and chose a route we hoped would lead to at least some deep-sea corals. We expected that corals would only be found in the steeper, more exposed areas on the ridge, since corals do not typically grow in areas with much sediment cover—flatter areas accumulate sediment. The dive started at the base of the Sur Ridge, and the pilots flew the ROV over the bottom toward the steep sloping sides of the ridge near its northern end. We hoped to see some rocky outcrops some time during the dive. 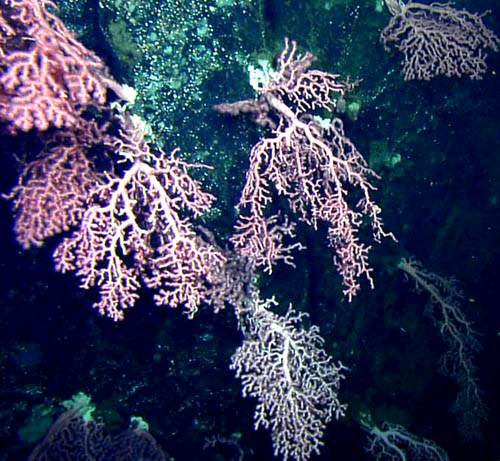 After only the first few minutes, deep-sea bubblegum corals appeared out of the gloom (we can only see the few meters ahead of the ROV lit by the strong lights). As the ROV continued along the steep side of the ridge, we found a forest of corals and gardens of multicolored deep-sea corals and sponges—truly a spectacular sight hidden 1,000 meters below the surface. 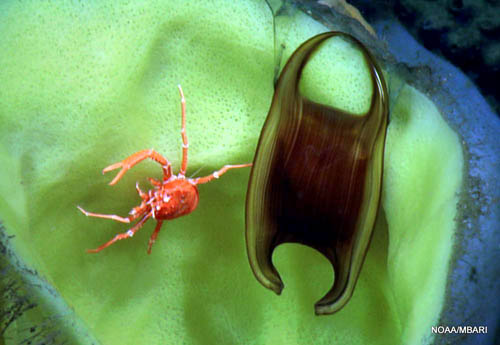 A squat lobster sits next to a skate egg case on a bright yellow “Picasso” sponge near 900 meter depth on Sur Ridge.

The ROV arrived at the top of the ridge near noon, and we decided to move to another area near the south end of the ridge and continue our exploration. The Western Flyer steamed south, only six miles, and we began our second dive of the day just after lunch.

After the spectacular vistas in the northern part of the ridge, the south end of Sur Ridge was a bit of a let-down, at least for the first half of the dive. The rocky sides of the ridge at its south end are more eroded than in the north. We saw many corals, but in far lower densities and smaller sizes than observed in the north. It appears that the rocks are simply too friable (crumbly) for corals to live long lives and reach large sizes. Just when we were thinking nothing exciting would happen on this dive, the ROV flew across rocky outcrops rich in sponges and some corals. Yellow, golden, and white sponges commonly reach a meter or greater in size, and are the dominant sea floor animals in some parts of the ridge. 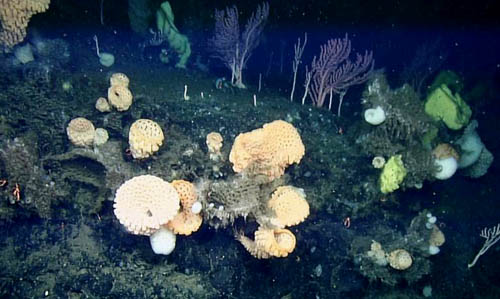 As we neared the end of the dive at the top of southern Sur Ridge, we stumbled onto a group of ‘cold seep’ clams. These clams are common in specialized habitats rich in methane and sulfide in Monterey Canyon, but the top of Sur Ridge seemed one of the least likely locations for these chemosynthetic animals. Unlike most clams that filter water past their gills to capture food, seep clams (vesicomyid clams) have symbiotic bacteria filling their gills. These bacteria use sulfide as an energy source to live and grow using chemosynthesis. Chemosynthesis is very similar to photosynthesis, but chemical energy, instead of sunlight, is used to create sugars and other organic compounds from carbon dioxide and water. It is a win-win for both species. The clams carry a steady sulfide supply through their blood from the methane seeps to their gills where the bacteria thrive, and consume the bacteria as food. The bacteria are provided a perfect environment for growth, and produce food for the clams. 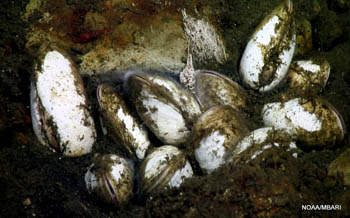 Chemosynthetic cold seep clams cluster over a methane seep near the top of Sur Ridge.

One puzzle that this discovery brings up is where does the methane and sulfide required to support chemosynthesis by these clams coming from? Most seep sites in this region are deep in canyons—this is the first we know of on top of a ridge like this. We expect that the rocks are rich in oils, and produce methane, which seeps out around the edges and can be used to produce sulfide, the key energy source for the clams. 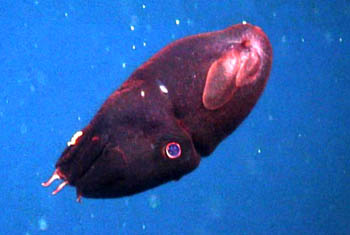 A young vampire squid (Vampirotuethis sp.) about two inches long. An adult will be 12 inches or longer.

If the methane seep discovery wasn’t exciting enough as an end to the dive, a young vampire squid appeared in front of the ROV just as the pilots were about to begin the ascent of the ROV to the surface. We all stared in awe of the little squid for several minutes, before departing for the surface.

What a great dive day! Tomorrow, we return to sampling the urchin caging experiment as planned for last Wednesday and Friday.