A corn field on the deep-sea floor?

The bumps and rolls during the night made it obvious that the seas had risen somewhat. We woke at 5:30 a.m. to 18 knots of wind—still very workable.

The first task for the day was to recover the benthic respiration system deployed two months ago. This contraption has eight chambers, each with pumps for stirring, flushing, and injecting fluids. We dropped it over the side of the ship in 3,200 meters of water here during our October cruise. The remotely operated vehicle (ROV) Doc Ricketts followed it down and we used the suction sampler to carefully slurp up small squat lobsters (galtheid crabs) and placed them into seven of the chambers. We quickly closed each chamber before the crab was able to escape. For the past six weeks, the systems “brain” has been measuring rates of oxygen consumption in each chamber. The pumps stir the water in each chamber and oxygen levels are measured every 10 seconds. Since each chamber is closed, oxygen concentrations drop slowly or rapidly according to how much oxygen each crab is using. After every four hour incubation period, the chambers were automatically flushed with fresh water so that the animals didn’t simply suffocate. We calculate the average rate of oxygen use over each four hour period as a measure of each animal’s respiration rate. 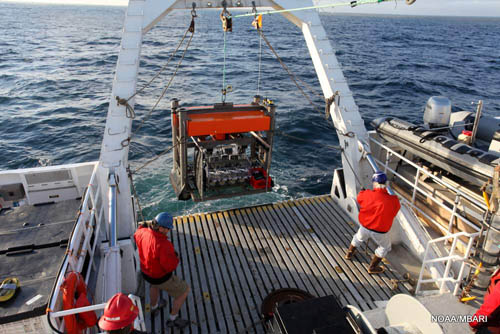 The benthic respiration system (BRS) is hoisted aboard the R/V Western Flyer.

The first 10 or so incubation periods are used to measure the average baseline respiration rate for each animal. After that, the system was programmed to inject a small volume of carbon dioxide-rich seawater (held in a bag on the system) into each chamber at the beginning of an incubation period to make the water inside a bit more acidic. Our purpose is to evaluate the sensitivity of these animals to more acidic waters that are expected in the future due to ocean acidification.

Ocean acidification is the change in ocean chemistry caused by the rapidly rising level of carbon dioxide in the atmosphere. Each year about one-fourth of our CO2 emissions are absorbed through the sea surface. That extra CO2 reacts with ocean waters to make the oceans more acidic. Ocean acidification is changing the chemistry of the oceans so rapidly and so much that by the time my son is an old man, ocean surface waters will be more acidic than has occurred in many millions of years—this is a very significant change that will affect ocean organisms and ecosystems in ways we don’t yet understand. 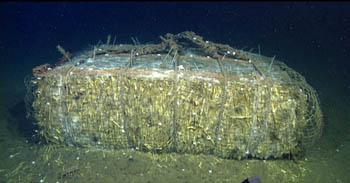 A bale of corn stover (what you have left of a corn plant after harvesting the ears) on the seafloor at a depth of 3,200 meters off central California, as part of a study evaluating the idea that crop debris could be sunk in the ocean as a carbon sequestration effort to mitigate global warming.

Our second objective for today was to visit the bale of corn stover we sank in 3,200 meter depth in 2009. One idea to help mitigate global warming is to gather up crop debris from fields across the nation, package it, add some ballast rock, and sink it into the deep sea. This would replace the current practice of extensive burning of the unwanted plant material. Not many organisms in the deep-sea are capable of digesting cellulose, so it is expected that the crop debris would last for centuries. We thought we’d test this idea and sank this four feett by four feet by eight feet bale of corn stover (what you have left after harvesting the ears). 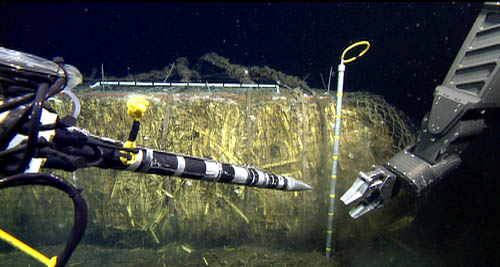 The ROV-operated oxygen probe and pore fluid sampler about to be inserted into the corn bale.

A squat lobster, or galetheid crab, walking across the top of the corn bale.

We inspected the bale, measured changes in oxygen from the outside to the inside using a special oxygen probe operated by the ROV, and sampled lots of the small animals found on the bale. Why are they on the bale? Can they digest cellulose? It turns out that at least some can. Several squat lobsters are known to have gut bacteria capable of producing cellulase, the key enzyme for digesting cellulose. In fact, the species of squat lobsters we find on the bale differ from those we find elsewhere on the seafloor away from the bale. Are these squat lobsters specialists on corn? We doubt it. But they may have evolved adaptations to exploit sunken plant debris (e.g., logs) that make their way to the deep sea. Will sinking crop debris solve the global warming crisis? No, but we will definitely need to examine lots of creative ideas that may help our climate change problem.

We finished by late afternoon and were able to see a beautiful “green flash” as the sun set.