The weather really closed in on us today with winds that increased by 400 percent overnight. We’re through the worst of it though and it is supposed to calm down tomorrow. Sounds pretty bad doesn’t it? But it only blew two knots yesterday and peaked at eight knots today—pretty nice. We’ve really been spoiled by the fine weather.

The top story today is about the hooligan sablefish. We were quite busy all day sampling the sediments under our urchin exclusion cages at the 600 meter deep urchin caging site we’d initially visited on Wednesday. Sablefish were common here a couple of days ago, but today it was as if a gang of troublemakers showed up. A school of sablefish (over 20 individuals of Anoplopoma fimbria) were very interested in anything near the ROV Doc Ricketts, frequently zooming in to the area and stirring up clouds of mud that made it hard for us to see the bottom. 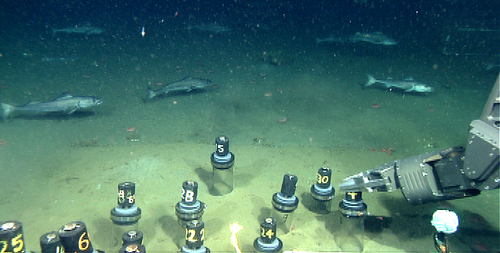 A school of sablefish can be seen in the background as we sample the sediments beneath an urchin exclusion cage that has been moved aside.

Although it seems like the fish are mischievous, they are more likely just exploiting the lights to hunt. In fact, we witnessed one large sablefish capture a juvenile thornyhead (Sebastolobus alascanus), right in the middle of the plot we were sampling. A few other invertebrates also disappeared from the plots during the apparent plundering by these hooligans.

All in all, however, it was a very successful day. We completed three ROV dives and finished sampling at this site, collecting 90 sediment cores and lots of urchins today. The excellent MBARI/NOAA team processed all of the samples by the end of the evening.

MBARI and NOAA scientists work together to process sediment cores. Some cores are sieved to separate animals from mud, then preserved, while others are subsampled for sediment tracers (organic content, grain size, ATP, other).

Once we return to shore, the tedious work of analyzing all of these sediment samples begins.

Tomorrow, we return to the corn bale at 3,200 meters—a test of the notion that sinking waste crop debris into the deep sea could be an effective way to avoid global warming.