Out of sight – out of mind

An estimated 10,000 shipping containers are lost over the side of cargo ships during rough weather each year. What happens to them? Some float for awhile and land on beaches, or break up and release their contents—a huge batch of Nike shoes washed up on northeastern Pacific beaches years ago. On a very rough, stormy day in February 2004, 15 containers fell from the Med-Taipae cargo ship into the waters of the Monterey Bay National Marine Sanctuary. The fate of 14 containers remains unknown, but one was found on an MBARI ROV dive just a few months later. This particular container had sunk to 1,281 meter depth on the continental slope about 20 miles west of Moss Landing. There was lots of speculation concerning what was inside—the leading rumor had it filled with expensive wine. In the end, it turns out to have 1,159 steel-belted Michelin tires. These tires are not likely to see a car anytime soon.

The Monterey Bay National Marine Sanctuary (MBNMS) received compensation from the shipping company, and some of the funds are supporting MBARI and MBNMS research concerning what impacts the container might have on the seafloor biological communities. Today, we dove on the container—our last visit was in 2011—to continue studying its effects.

Conditions were perfect today. The winds were just as forecast—less than five miles per hour, and seas were flat calm. It doesn’t really feel like we are on a ship. The ship, ROV Doc Ricketts, and crew worked flawlessly and we were able to accomplish all of our goals without any problems. 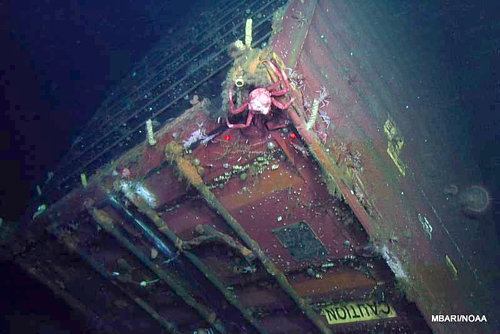 Colonizers on the container include crabs and deep sea snails.

When the ROV approached the container, we realized that the splendid conditions on the sea surface were not really the same at the bottom. A strong current was running over the bottom, making it difficult for the ROV to maneuver near the container, and stirring up quite a bit of sediment, reducing visibility somewhat. The pilots quickly adjusted to these conditions, and we were able to work efficiently. The trick is to not touch the bottom with the ROV until you must. Once you touch down, mud sticks to the bottom of the ROV and when it flies back up above the bottom, the mud slowly washes off, clouding the water for several minutes.

Once conditions cleared up, we asked the pilots to “fly” the ROV slowly around and over the container, allowing us to capture some great video—images from the video are shown in this log. We then “flew” all of the video transects necessary to determine if the distribution and abundance of seafloor animals has changed since our last visit. Our first objective was completed. Turning the video records to real data will take weeks of work in the lab to sort through all of this video and count all the animals.

We were amazed at the abundance and diversity of animals that have settled on the container. Worms, snails, crabs, scallops, hydroids, sponges, tunicates, nudibranchs, shrimp, medusa, anemones, sea stars, amphipods (sea fleas), bacterial mats, and many others cover some areas of the container. 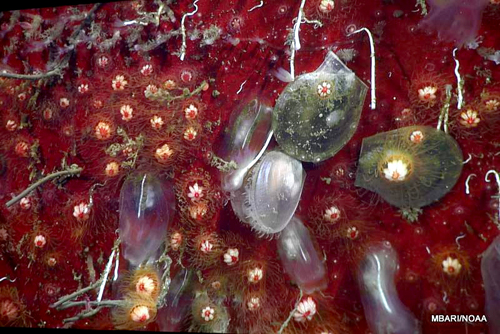 Animal life has increased since our last visit in 2011. This close-up video image shows grey tunicates, flower-like medusa, and white tubeworms, among other animals.

Sediment cores were also collected efficiently. We had to make a trip up to the surface to swap out the cores we’d used with a new set of 30, so that we could collect all that we needed from around the container. This exchange took about two hours, and happily coincided with lunch, giving most of us a short rest.

Processing the sediment cores at the surface was pretty quick. We had lots of help with everyone pitching in and within a couple hours, we were finished. The majority of the cores will be used to measure the distribution of trace metals near and distant from the container. Are trace metals leaching from the container? And if so, how widely is it distributed? We hope to answer those questions from the samples collected today.

The robotic arm of the ROV collects a sediment core sample near the base of the container while a large crab supervises.

It seems pretty obvious that this one container could have only localized effects on the seafloor ecosystem. It is marine trash, and is not something we want to see on the seabed, but we cannot conclude that it is anything more than a minor blemish in the immediate vicinity. But what about the 10,000 containers lost yearly, each that may persist for decades or centuries? If this is indeed accurate, then these containers are accumulating on the bottom of the ocean, leaving a far larger area of impact. They may be out of sight, but they shouldn’t be ignored. Marine debris is an increasing problem that can be solved quite easily with a modest increase in effort to avoid such losses.

Tomorrow, we return to the urchin studies described in yesterday’s blog. Thanks for reading.