The R/V Western Flyer left the dock in Moss Landing on time this morning at 8:00 a.m. and departed the harbor under a brisk offshore breeze and sparkling clear skies. We headed out roughly 15 miles for the first day’s activities on a six-day research cruise. The research objectives for the day were to retrieve a benthic mooring deployed in the canyon six months ago, and to begin sampling a deep-sea urchin caging experiment that was initiated two years ago. The benthic mooring is a few instruments moored to a weight on the seafloor that measure rates of sedimentation of organic debris, current speeds, and the turbidity of the waters in the bottom of the canyon. 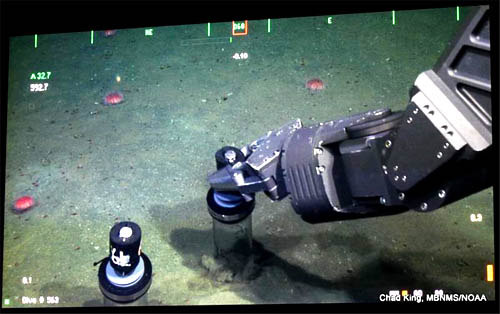 The robotic arm of the ROV Doc Ricketts pushes a core sampler into the muddy seafloor to collect sediment for analyses of the macrofauna (small worms and crustaceans) inhabiting the sediment. Over 60 cores were collected today, along with several fragile deep sea urchins. Our research team will use these collections to help understand the effects urchins have on the sediment-dwelling animals (macrofauna) as well as determine rates of growth and reproduction for the urchins.

The first day of a cruise is always a day to settle into the tempo and routine of a cruise. As is tradition, the required safety drill was announced by a blasting alarm bell. The nine members of the science crew hastily grabbed their survival suits (gumby suits) and headed to the designated muster location in the wet lab at the aft section of the Western Flyer. The second mate delivered a safety briefing and we discussed many of the details of the research planned for the next six days.

Not too long after the drill, we were at the benthic mooring location, where Patrick Whaling and Kurt Buck worked to communicate with the acoustic release on the mooring. In just a few minutes they reported that the acoustic release, which responds to acoustic signals sent from the surface, had released its grip on the large anchor weight that was used to sink the benthic mooring six months ago to a depth of 1,281 meters in Monterey Canyon. The mooring was now floating toward the surface. After about 30 minutes, we expected to hear the radio beacon blaring—it only transmits when the beacon is above the surface—but it never came on. We were sure the mooring was at the surface and near the ship, and after about 15 minutes we saw the yellow floats bobbing in the small swell. The crew moved the ship to the floats, grappled it, and hoisted it aboard with the winch and A-frame on the ship’s stern. Data from this mooring will be used to understand how organic material and sediment makes it way down the axis of Monterey Canyon. Once the mooring was aboard, we headed for our next station for the day.

The control room of the RV Western Flyer includes many large high-definition television screens that broadcast a live image from the seafloor. The ROV pilot and robotic arm operator are seated to the left. The science lead in the middle, and the navigator and video annotator to the right.

The remainder of the day was devoted to remotely operated vehicle (ROV) Doc Ricketts operations at 600 meter depth where we sampled an experiment designed to help us understand more about the lives and activities of deep-sea fragile sea urchins than live in abundance from depths ranging from 200 to 1,200 meters along the continental shelf of the northeast Pacific. These urchins are one of the most abundant megafauna (animals easily identified without a microscope) on the upper continental slope in this region, but we don’t know much about them. For example, what role do they play in the deep-sea benthic ecosystem? How fast do they grow and reproduce? Are they sensitive to changes in ocean conditions caused by human activities?

About two years ago, our lab group initiated an urchin caging experiment. What is that? It is an approach used commonly on land and in shallow marine waters to measure the effect of one animal on other members of its ecological community. In essence, you set up several cages on the bottom, some with the animals (in this case urchins), some without urchins, and then measure any differences that develop in the composition or abundance of other organisms inside both types of cages. Two years ago, we placed six cages (five feet by five feet by one foot high) at depths of 200, 600, and 1,000 meters just outside Monterey Bay. The cages are covered with plastic mesh. Fifteen urchins (Strongylocentrotus fragilis) were added to each of three cages at each depth. Three other cages had no urchins. We also counted all of the megafauna (remember? – big animals) in each cage, and collected 10 sediment cores (see photo above) from which we will count all of the macrofauna (the little animals). You might think that just putting the cages on the bottom could have a pretty big influence on the animals within each cage—with or without urchins. Good point. So to help understand that, we also put down three cages with no mesh, and also designated three other areas nearby with no cage at all, and sampled them in the same manner as within the cages. We’ve now returned to remove the cages, count the megafauna, and sample the sediment for macrofauna in the same way we did two years ago. Once all of this is analyzed, we should have some idea of the effects urchins have in this ecosystem. 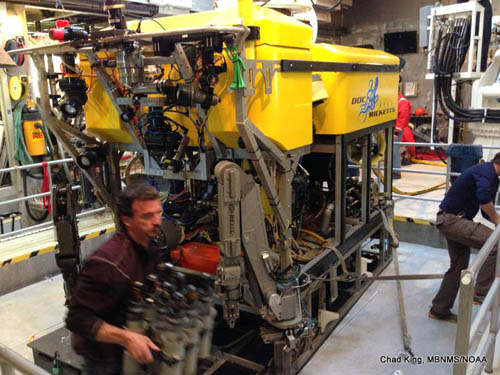 Sediment samples, or “push cores” being transported from the just-recovered ROV Doc Ricketts. These cores were then processed in the science wet lab.

That isn’t all we are hoping to learn from this. We also hope to learn more about how fast urchins are growing at different depths. Two years ago, we soaked many of the urchins initially placed in the cages in seawater with lots of calcein, which is a fluorescent dye that urchins incorporate into their skeletons. Urchins actually have rings in their shells (called tests), much like tree-rings. The calcein should leave a fluorescent ring we will hopefully be able to see under the microscope (with UV illumination) to determine how many rings are formed each year. We expect the answer to be one ring equals one year. That information and changes in the sizes of these animals will help us understand how fast they grow, and how much that differs among depths, if at all. If so, why?

Sampling today was fantastic. Everything worked—you’d be surprised just how many things need to work together to pull off a successful ROV dive. The ship’s positioning system, the ROV winch and tether, all the computers involved, the ship navigation system, the ROV navigation system, robotic arms (we really depend on these) on the ROV, video cameras, on and on; It was like a beautiful symphony today—flawless. We were able to collect 60 sediment cores, while sampling three control locations and three cages (of nine cages at the 600 meter sites). Once all the samples were aboard, the entire science crew worked hard to process all of the samples. It will take months to get the final data set, but just getting the samples back is pretty gratifying. We’ll return here in a couple of days to continue this work.

Tomorrow, MBARI and National Oceanic and Atmospheric Administration (NOAA) scientists aboard the Wester Flyer plan to re-visit a lost shipping container that fell from a ship during a huge storm in February of 2004. We first sampled it in March of 2011. We’re excited about observing any potential changes in the container’s condition, and any changes in faunal communities on or around it. Although thousands of these containers are thought to fall from ships each year, this is a rare opportunity to study their potential effects on the deep seafloor. In addition to all sorts of video recordings, we will collect sediment samples to test for presence of heavy metals that come from the toxic marine paint that is slowly chipping and peeling off the container.