The R/V Western Flyer left its home port of Moss Landing under cloudy skies, but otherwise ideal conditions. Winds and seas were light and the ROV Doc Ricketts is in tip-top shape.

As we organized our gear and prepared for the first dive, the alarm bell suddenly blasted our ears, notifying us that the scheduled safety drill was starting. We all rushed to our rooms to retrieve our “gumby suits” – bright red survival suits – and mustered in the science wet lab. Miriam Anthony, the second mate, introduced the safety guidelines we must follow for the cruise, mainly reminding us to consider safety in all aspects of our work. Rosemary Romero hadn’t been aboard before today and was chosen to demonstrate donning the gumby suite – she was about as quick as any old hand on the boat.

This site is one of three sea urchin study sites that were set up about two years ago. At that time, we collected a number of fragile sea urchins (a deep-sea species) at a depth of 600 meters (the middle of their depth range). We placed these urchins in mesh cages (two meters by two meters by 0.3 meters) on the seabed at three depths (200, 600, and 1,000 meters).

We placed six cages at each depth. Three of the cages contained 15 urchins each. The other three cages had no urchins. We expected that the urchins would fare quite well in the cages, consuming food that drifted into the cage. They typically eat drift kelp or other algae, but they also plow through the sediment and probably eat whatever they encounter. 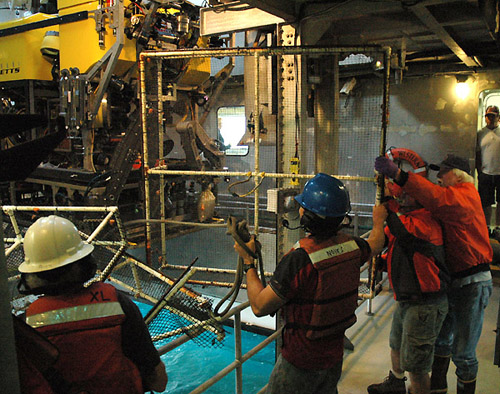 When the ROV Doc Ricketts was brought back on board the R/V Western Flyer, it carried not only samples, but also some of the cages that had been on the seafloor for the past two years. Patrick Whaling and the ROV pilots try to get the battered cages out of the water so that we can close the moonpool doors and lash down the ROV.

Because these urchins are quite common, we thought they could have important effects on populations of their prey inside the cages. We are testing this idea by sampling the sediment community (megafauna – fish, mollusks, etc.) as well as the mud dwelling macrofauna (small shrimps, worms, etc.) in and around the cages. We will use video to determine the abundance of megafauna and sediment samples (push cores) to sample the macrofauna. Finally, we’ll compare changes in the abundance of each of these animal groups between cages with and without urchins. 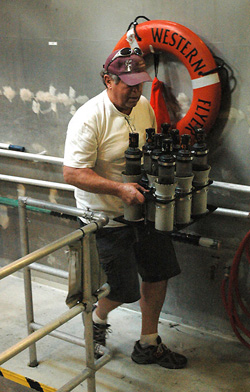 In this photo, Kurt Buck carries a heavy tray of sediment cores from the ROV to the wet lab. We collected 32 of these cores during our dive today.

We also hope to measure how fast the urchins grow in the cages, and to find out if they create annual rings in their tests (shells) analogous to annual tree rings. Two years ago, before we placed the urchins in the cages, we kept them in an aquarium that had calcein in the seawater. Calcein is a fluorescent dye that has been used to add a fluorescent ‘marker’ (a fluorescent band, for example) to the skeletal structure of other animals, to help understand their rates of growth. 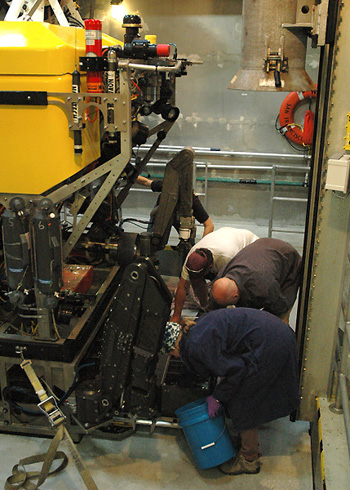 When the ROV arrives back on deck, everyone rushes to get the samples off the ROV and into a refrigerator.

All went very well during the dive today. We collected all of the remaining urchins (as well as other animals) from one of the test cages. We also did detailed video surveys and collected animals from inside the two cages with no urchins. Finally, we collected lots of sediment cores from all three cages.

The ROV was back at the surface by about 5:00 p.m., carrying samples, push cores, and the cages from the completed experiments. After a quick dinner, we set out to process all of the samples. Everyone worked hard to subsample the sediment cores, and sieve the sediment to separate the mud from animals. With lots of teamwork, we finished in just a couple of hours, processing 32 cores, and preserving a number of smaller urchins, snails, and other fauna we’d collected. 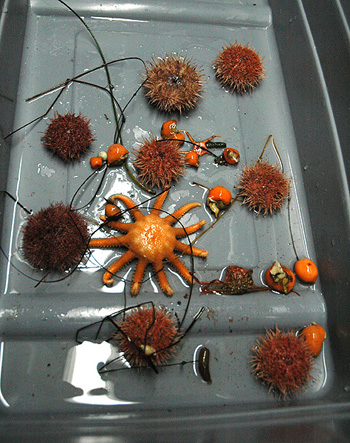 Here are the fragile sea urchins and other animals that we collected today. These were living in one of the cages that we placed 1,000 meters down on the seafloor two years ago. The orange blobs are sea anemones that have withdrawn their tentacles.

We’re now steaming offshore to the “Deadwood” site, where we’ll dive tomorrow to revisit logs we placed on the seafloor three to five years ago to measure the types of colonizing animals that show up on woody logs that make their way to the deep sea. Does the size or species of log affect the types or numbers of animals? We hope to find out tomorrow. 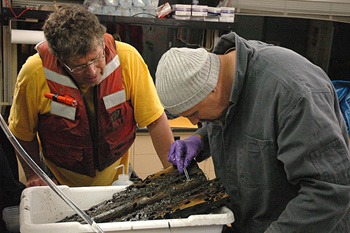 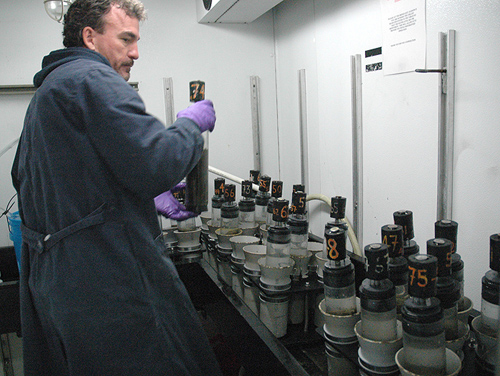