Behind-the-scenes at the Monterey Bay Aquarium

A bright and sunny morning meal at First Awakenings was the perfect way to wake the summer interns up before a big day. With bellies full of crepes, omelettes, and waffles, we headed to the back gates of the Monterey Bay Aquarium for a behind-the-scenes tour. 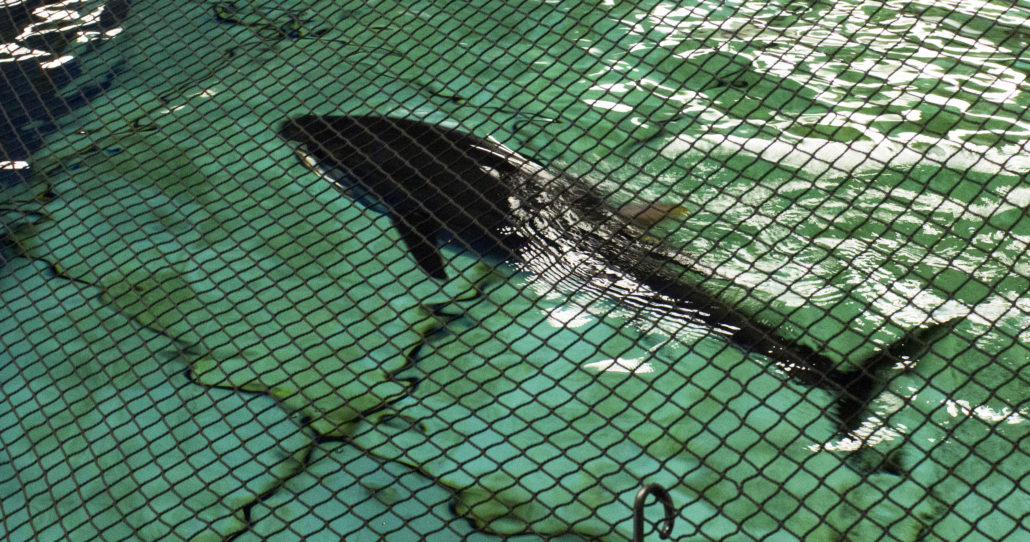 The first stop on the tour took us to the Tuna Research and Conservation Center  which is run by Stanford University’s Hopkins Marine Station in collaboration with the Monterey Bay Aquarium. The center houses primarily Pacific bluefin tuna (Thunnus orientalis), ranging from smaller juveniles to ferocious 600-pound adults. Other tanks include different types of fish, like the California amberjack (Seriola lalandi) and the occasional ocean sunfish (Mola mola).

One of the aquarists, Alex, introduced us to the basics of tuna biology and conservation while other aquarists began feeding the yellowtails. This made quite a splash on the interns! As bits of squid and sardine plopped into the yellowtail tank, the previously calm tank became a whirlpool of very hungry fish, sending waves over the side and spraying unexpected interns. 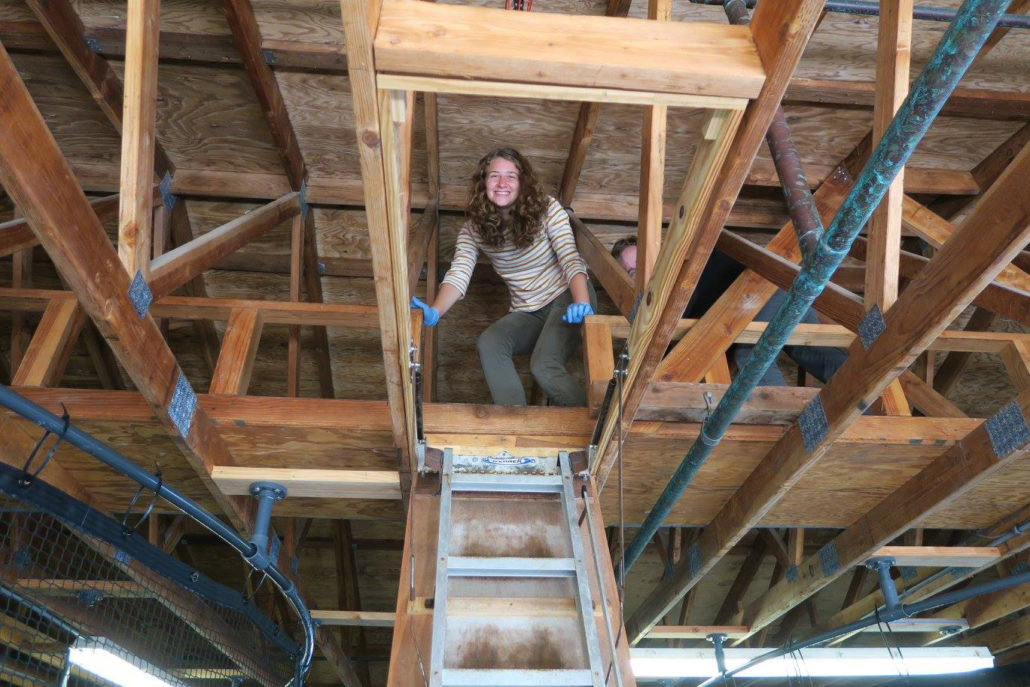 Once the yellowtails had eaten their fill, it was time to feed the tuna. Two brave interns, Ellie and Pierre, volunteered to help feed the largest of the tunas. After climbing up to the rafters, they tossed chunks of fish and squid into the churning fathoms below. The two were careful not to fall in and made it back unscathed. While tuna have never been documented eating a hapless intern in the wild, a flailing intern landing smack in the middle of their tank just might be too enticing for a hungry tuna to pass up.

Watch as Ellie and Pierre feed the ravenous tunas:

Sharks, jellies, and turtles—oh my!

After a thorough soaking from the splashing tuna, our guide, Lauren, took us into the aquarium. Our first stop was the top of Monterey Bay Habitats exhibit, where seven-gill sharks swam in lazy circles and colorful rock fish lounged below.

Next, we took a trip to visit the jellyfish staging area, where a tank of moon jellyfish were waiting to be touched. Although every jellyfish stings, a sting from the moon jelly isn’t dangerous to humans. Some interns swear they felt a substantial tingling in their fingers afterwards, but the nearby vinegar wash quickly took care of that problem. 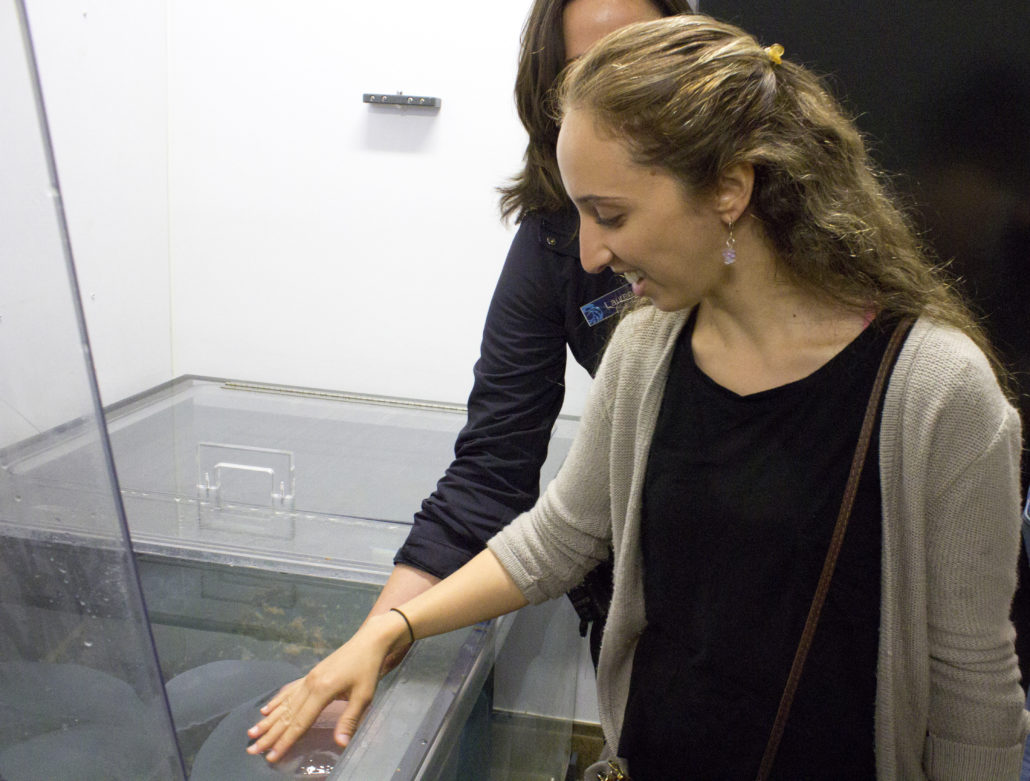 For the final stop on the tour, we had a chance to visit the top of the Open Sea exhibit. When we arrived, the fin of a hammerhead shark cut through the surface and a giant sea turtle floated around the tank.

Although the inhabitants of the Open Sea exhibit mostly get along because they’re quite well-fed, nature doesn’t always care about optimal aquarium conditions. As if to prove it was an apex predator just as fearsome as the hammerhead shark, the sea turtle snatched a nearby sardine for a quick snack. 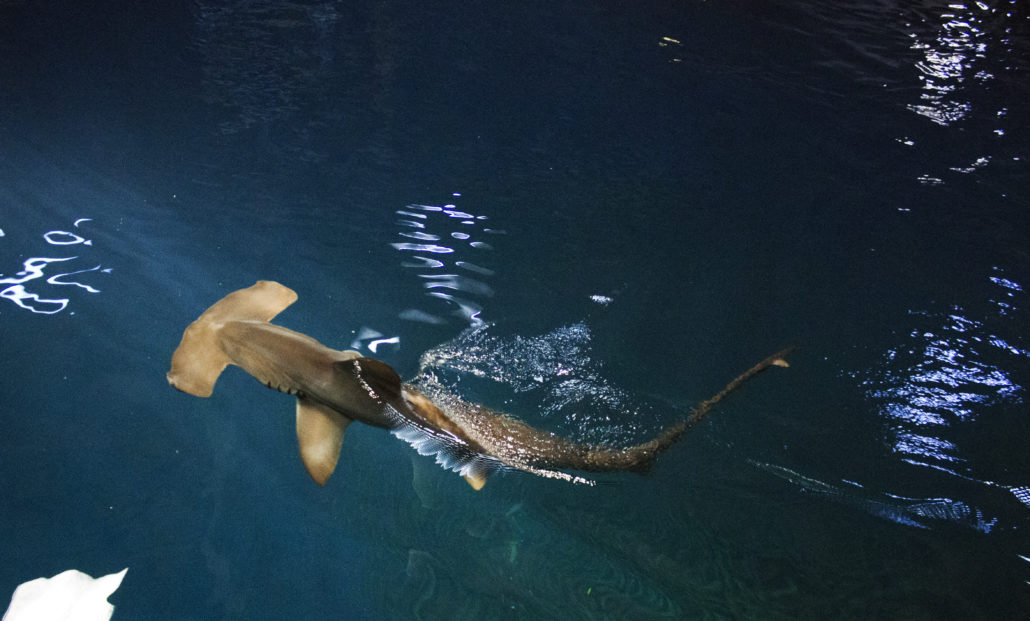 Afterwards, the interns disbanded to wander the aquarium before heading back to MBARI. That night, visions of moon jellyfish danced in their heads.