MBARI’s Pelagic-Benthic Coupling Group, led by Chief Scientist Ken Smith, is currently working on the R/V Western Flyer at Station M, located 200 kilometers off the coast of Santa Barbara, California. This week marks the 65th research expedition dedicated to an abyssal time series study at Station M. Since 1989, studies at this site 4,000 meters deep have produced insights into changing conditions in the deep sea. The research group is studying carbon supply to deep-sea ecosystems, and benthic community responses to food supply.

Time-lapse photography is another method used by Ken Smith and his team to study how the pelagic (upper water column) food supply affects the benthic (seafloor) community. This research group has developed a camera tripod mooring which sits on the seafloor 4,000 meters deep at Station M, taking photographs every hour. From the images, we can identify animals and even detritus that has fallen from the pelagic zone all the way to the deep seafloor. Detritus includes the bodies or fragments of dead organisms as well as fecal material. This detritus is food for benthic animals and a large event of sinking detritus can be a huge boon to the community.

On this eight-month-long deployment of the camera tripod, over 6,000 images were taken of the seafloor. The team will count the animals, track their feeding behaviors, and measure their size. They will also track the detritus present on the seafloor. Although technology has changed over the years, from film to digital imagery, Smith has been collecting time-lapse photographs from Station M since 1989. With the 26-year photo record, they can piece together the long-term trends and see the booms and busts of the benthic community. Understanding the coupling between pelagic productivity and deep-sea benthic communities will help in understanding how climate variation will affect seafloor communities. 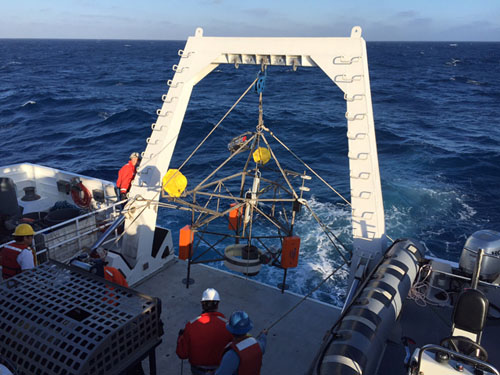 On this expedition, the team recovered the camera tripod mooring, serviced it, and redeployed it. In this photo, it is deployed using the A-frame on the R/V Western Flyer. 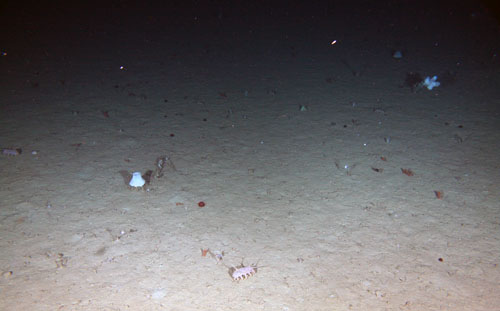 This is one of over 6,000 images captured in this recent deployment of the camera tripod. You can see many sea cucumbers, including a common inhabitant Scotoplanes globosa in the foreground. There are also sponges and sea urchins in the image. 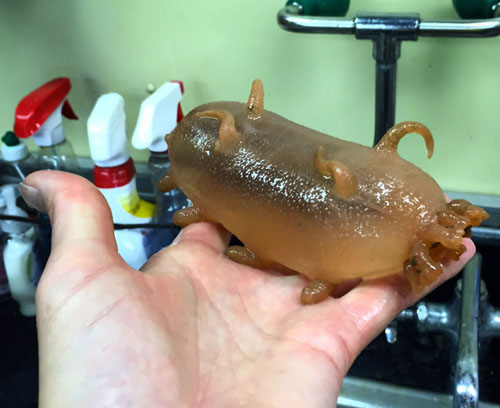 Scotoplanes globosa, affectionately known as the sea pig, is one of the most common animals on the deep seafloor at this depth. We collected some to look at their gut contents.

During upwelling events, large amounts of phytoplankton grow in surface waters and at Station M (off the coast of central California) they sink 4,000 meters (2.5 miles) to the seafloor. Chlorophyll and other pigments in phytoplankton provide important food sources to organisms on the abyssal seafloor. The chlorophyll in this dead, sunken phytoplankton fluoresces under certain wavelengths. Essentially, it glows under black light and can be seen here as white specks photographed by the Benthic Rover’s fluorescence camera. Many of the sea cucumbers that eat the remnants of sunken phytoplankton at Station M are transparent, allowing us to see that they have selectively fed on this nutritious food source—even their droppings glow in the black light. 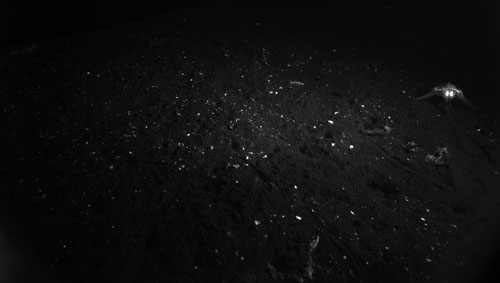 The white specks in this photo are the remnants of phytoplankton which sank from the sea surface all the way to the seafloor at 4,000 meters. A special camera shows the fluorescence of the dead phytoplankton sitting on the seafloor. 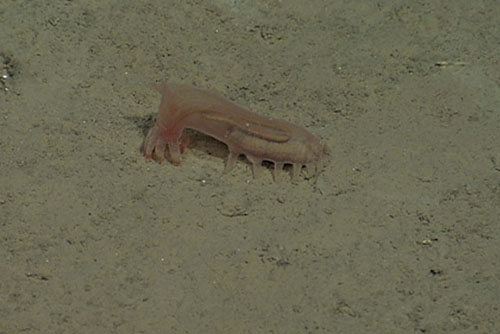 The sea cucumber Peniagone sp. is a common inhabitant of the seafloor at Station M. 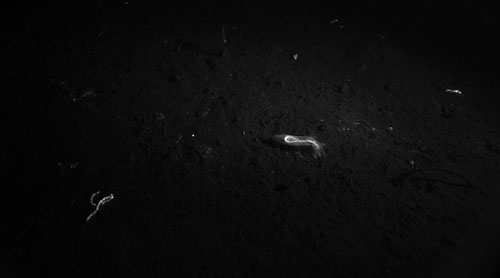 In this image, you can see fluorescence of dead phytoplankton in the gut of the sea cucumber (center) and in some droppings (lower left).

The Benthic Rover is one of the tools developed by MBARI engineers to study carbon supply to deep-sea ecosystems, and benthic community responses to food supply. The seafloor at Station M is 4,000 meters deep, where the rover slowly moves along the seafloor stopping to make 2.5-day-long measurements of the oxygen used by organisms living on and in the sediment. On this expedition, the group recovered the rover after an eight-month-long deployment on which it made 102 respiration measurements over a one kilometer seafloor transect. This is the most successful deployment of the rover yet in her five years studying benthic communities at Station M! 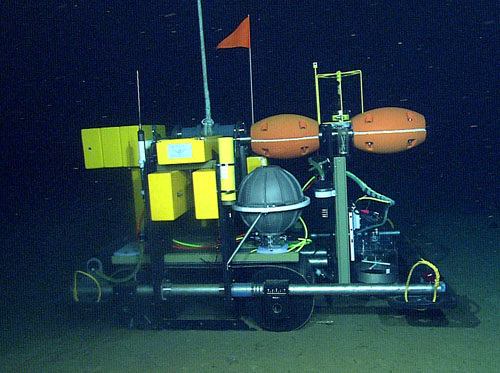 The Benthic Rover is a mobile physiology lab. In a series of experiments, the rover measures how much oxygen seafloor organisms use. The rover is about the size of a riding lawnmower. It drives across the soft seafloor on caterpillar treads, which distribute the rover’s weight, have a better grip, and make less impact on the bottom than wheels. Although the rover weighs more than a ton in air, buoyant foam panels reduce that to 45 kilograms (100 pounds) in water. 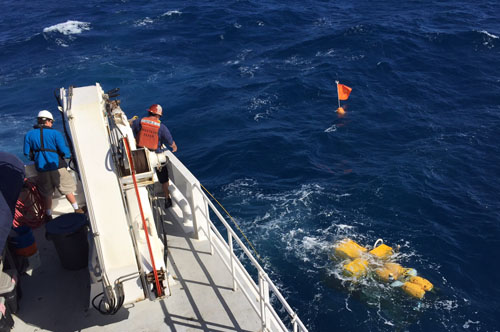 The rover has a 20-meter-long line that is attached to a spar buoy, which makes it easy to find when it comes up to the sea surface. The crew throws a grappling hook to catch the line and then attaches the line to the crane for recovery. 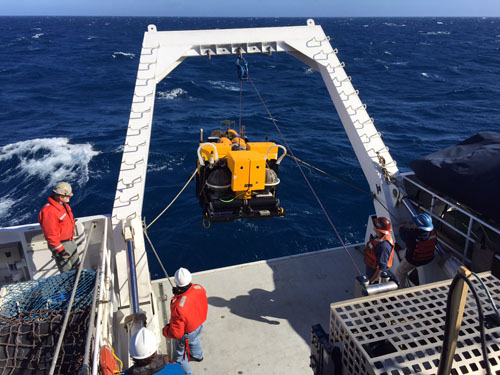 The rover is recovered onto the well deck of the Western Flyer. 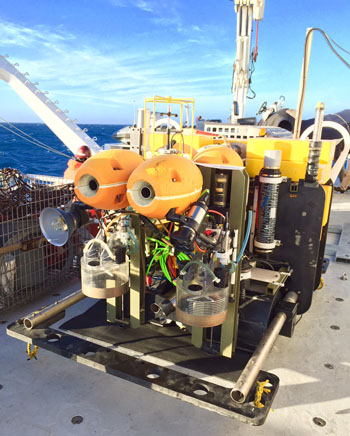 The rover is secured on the back deck. Over the next few days, the team will download the data, perform maintenance, and prepare it for another deployment. They will deploy the rover again before leaving Station M. That deployment will last five months. 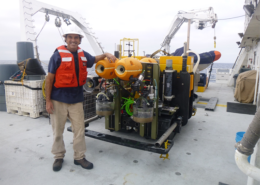 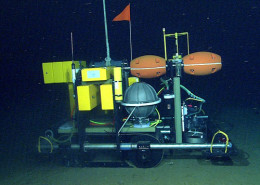 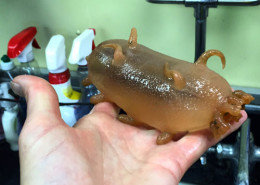 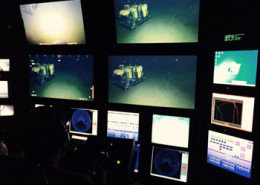