During spring 2012, MBARI researchers are making a long-awaited return to the Gulf of California, the 1,130-kilometer-long (700-mile-long) finger of water that separates the peninsula of Baja California from mainland Mexico. The expedition, which runs from February 4 to May 10, will build on many of the exciting discoveries made during MBARI’s first trip to the gulf in 2003.

The Gulf of California holds special scientific appeal because of its nutrient-rich surface waters filled with life, its extensive layer of oxygen-poor water, and the many hydrothermal vents, undersea volcanoes, and zig-zag faults that have shaped its seafloor. In addition to studying these diverse physical environments and the fascinating creatures that inhabit them, MBARI’s scientists hope to compare life in the gulf to life in the extensively studied ecosystems of Monterey Bay. In particular, the warm, low-oxygen waters of the gulf may offer a window into the future of Monterey Bay under some climate change scenarios. 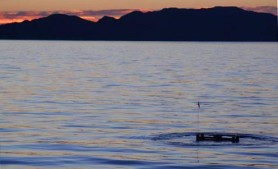 A piece of equipment that measures the respiration of seafloor animals surfaces in the early morning in the Gulf of California.

Like a scientific relay, this 12-week expedition is divided into several legs, each led by a different scientist with a different research focus. Some scientists are measuring ocean currents, while others are studying the diverse animals that swim and drift in the gulf’s clear water. Still others are investigating the chemistry of the seawater and the active geologic features on the gulf’s seafloor.

It is fitting that MBARI’s scientists will journey to the Gulf of California aboard a research vessel called the Western Flyer. MBARI’s flagship research vessel was named after the boat that writer John Steinbeck and marine biologist Ed Ricketts used for a groundbreaking expedition to the gulf in 1940. Their journey of scientific discovery and adventure, recorded in the book The Log from the Sea of Cortez, has sparked the curiosity and imagination of readers for over 70 years.

MBARI’s first expedition to the gulf in 2003 yielded many intriguing observations, and prompted new scientific questions that MBARI researchers are hoping to answer. MBARI’s attempted return to the gulf in 2008 was cancelled after the Western Flyer was damaged while entering the port of La Paz. After years of planning and preparation, the 2012 expedition should produce more exciting finds, and will add to the legacy of scientific exploration in this unique and remote marine environment.