Deep-sea ecologist Ken Smith and his research team continue their 24-year-long time-series study of the coupling of open-ocean food supplies and the responses of seafloor communities at Station M, approximately 200 kilometers (125 miles) off the coast of Point Conception in the eastern North Pacific Ocean. Large algal blooms are common in the surface waters at this site in the spring and summer. The organic material formed during these blooms eventually sinks down through the water column and feeds many of the animals that live on and in the seafloor.

Recent research has shown that climate variation can affect levels of photosynthetic activity at the sea surface. In turn, photosynthetic activity levels affect the quantity and quality of organic carbon that sinks to the seafloor as detritus, or marine snow. Variations in the amount of marine snow deposited on the seafloor can affect the size and abundance of the animals nourished by this food source, as well as the deep-sea community at large.

On this cruise, Smith’s research team will retrieve and redeploy the deep-sea observation equipment and the Benthic Rover they left on the seafloor in November 2012. They will also be deploying equipment designed to measure the respiration of the seafloor communities.

Continuing their 24-year-long time-series study of the coupling of open-ocean food supplies and the responses of seafloor communities, Ken Smith and his research team will retrieve and redeploy deep-sea observation equipment and the Benthic Rover at Station M, approximately 200 kilometers (125 miles) off the coast of Point Conception in the eastern North Pacific Ocean. The seafloor at Station M, 4,100 meters (13,500 feet) below the ocean’s surface, is flat and muddy and composed of silty clay sediment and seasonal deposits of detritus.

Time-lapse photography at Station M has revealed abundant evidence of bioturbation—the mixing of sediment by organisms burrowing into the seafloor—and other activity by animals living on and in the sediment such as trails, furrows, and mounds that can be centimeters to meters across. Smith and his colleagues will now have the opportunity to analyze a new set of time-lapse photographs taken by a camera mounted on the deep-sea observatory they deployed in November 2012 and will recover on this expedition. They will also process samples from the observatory’s sediment traps to obtain values for organic carbon and nitrogen, as an estimate of the food supply to the benthic community. A sedimentation event sensor (SES) that photographs settling particles for comparison with the sediment traps will also be recovered.

The Benthic Rover, which has been traversing the seafloor for the past five months, will be recovered, serviced, and redeployed.

The vast muddy expanses of the abyssal plains occupy about 60 percent of the Earth’s surface and are important in global carbon cycling. Changes in the Earth’s climate can cause unexpectedly large changes in deep-sea ecosystems. Based on 18 years of studies, MBARI’s Ken Smith and his coauthors showed that such ecosystem changes occur over short time scales of weeks to months, as well as over longer periods of years to decades.

This video shows a series of time-lapse still images of animals on the deep seafloor. The images were taken at one-hour intervals over a period of about three months in spring 2007. These images were taken at “Station M,” a long-term research site about 4,000 meters below the surface and 220 kilometers west of Point Conception, on the Central California Coast. MBARI marine ecologist Ken Smith has been conducting research at Station M since about 1990.

June 19, 2013
Today is our last work day of this expedition, and we’re trying to get instruments back in the water before the weather turns again.

June 18, 2013
Today we brought up the sediment event sensor (SES), a recent MBARI invention that collects sediment for a few hours at a time, and then takes a picture of it rather than collecting the sample.

June 17, 2013
The weather models predicted today to be the calmest of our cruise, so today we recovered the Rover. Like the Mars Rover, the deep-sea Rover II is a self-driving tank that stops at planned intervals to run experiments on its environment.

June 16, 2013
Today we made the most of the good weather. In the morning we launched the remotely operated vehicle (ROV) Doc Ricketts, which descended at 35 meters (115 feet) per minute to make its way to Station M by around breakfast time.

June 15, 2013
Day two was calm enough for a few operations. This morning we deployed the benthic elevator outfitted with respirometry chambers, and a new sediment trap funnel that we’re pressure-testing.

June 14, 2013
Winds over 30 knots and swells over 10 feet were enough to sideline us for the first day of this expedition. 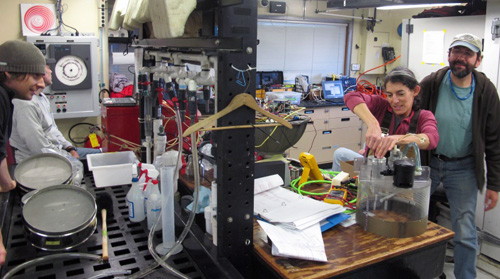 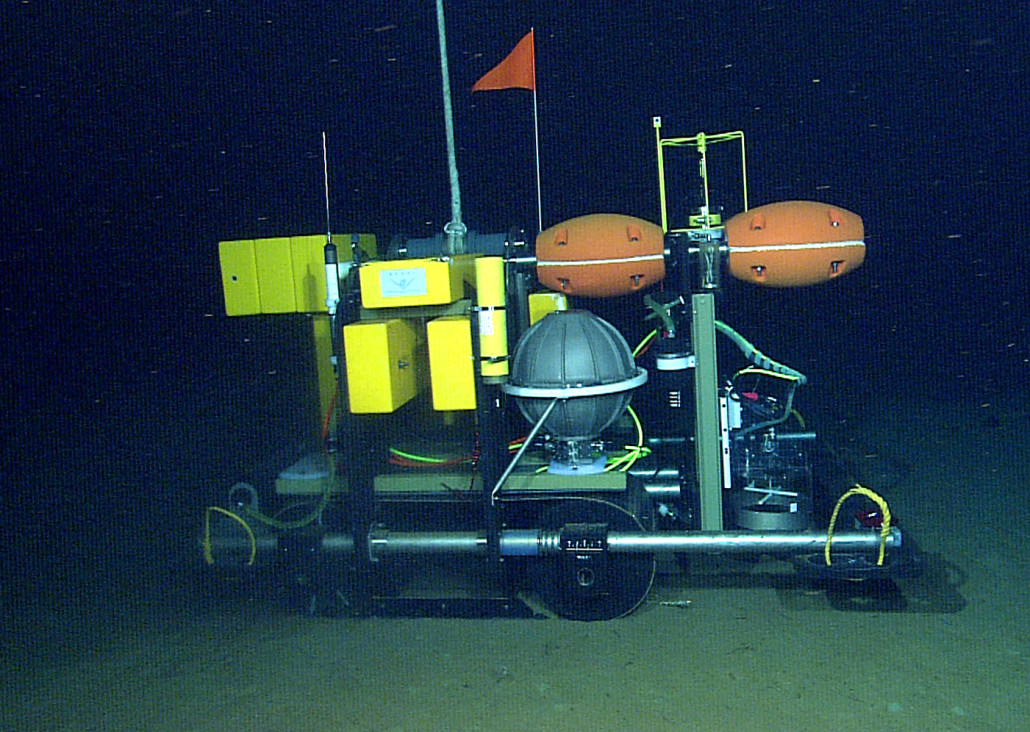