A group of MBARI scientists and engineers, led by geologist Charlie Paull, is returning to the Beaufort Sea on the Canadian Coast Guard Icebreaker Sir Wilfrid Laurier in collaboration with researchers from the Geological Survey of Canada and Fisheries and Oceans Canada. Paull and his team will conduct mapping surveys with an autonomous underwater vehicle (AUV), followed by dives with a remotely operated vehicle (ROV) to ground-truth the mapping surveys and conduct targeted sampling. 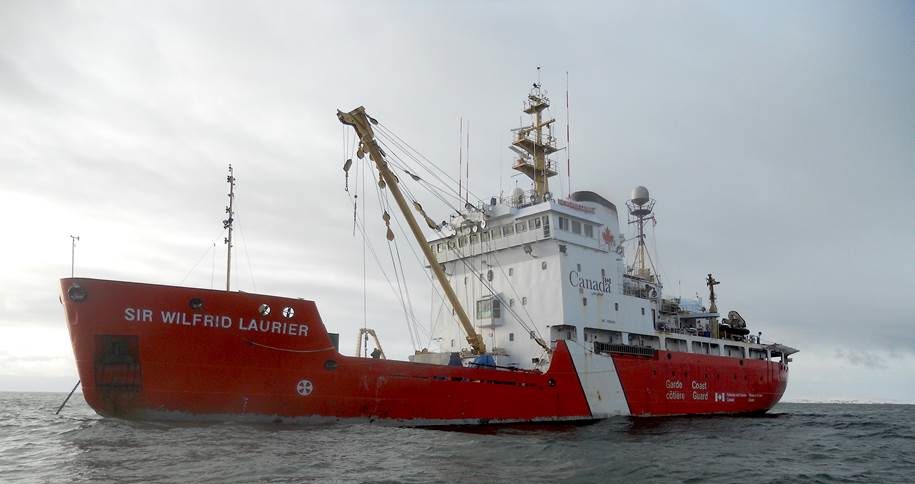 MBARI participated in previous research cruises (in 2003, 2010, 2012, 2013) in the Canadian Beaufort Sea with the same group of collaborators. In past cruises, they documented methane escaping from the mid-shelf, along the shelf edge, and from sites on the upper slope. The dynamics of gas venting at many of these sites are associated with either the decomposition of glacial permafrost that was flooded during sea-level rise at the end of the last glacial period or of deeper gas hydrate deposits. 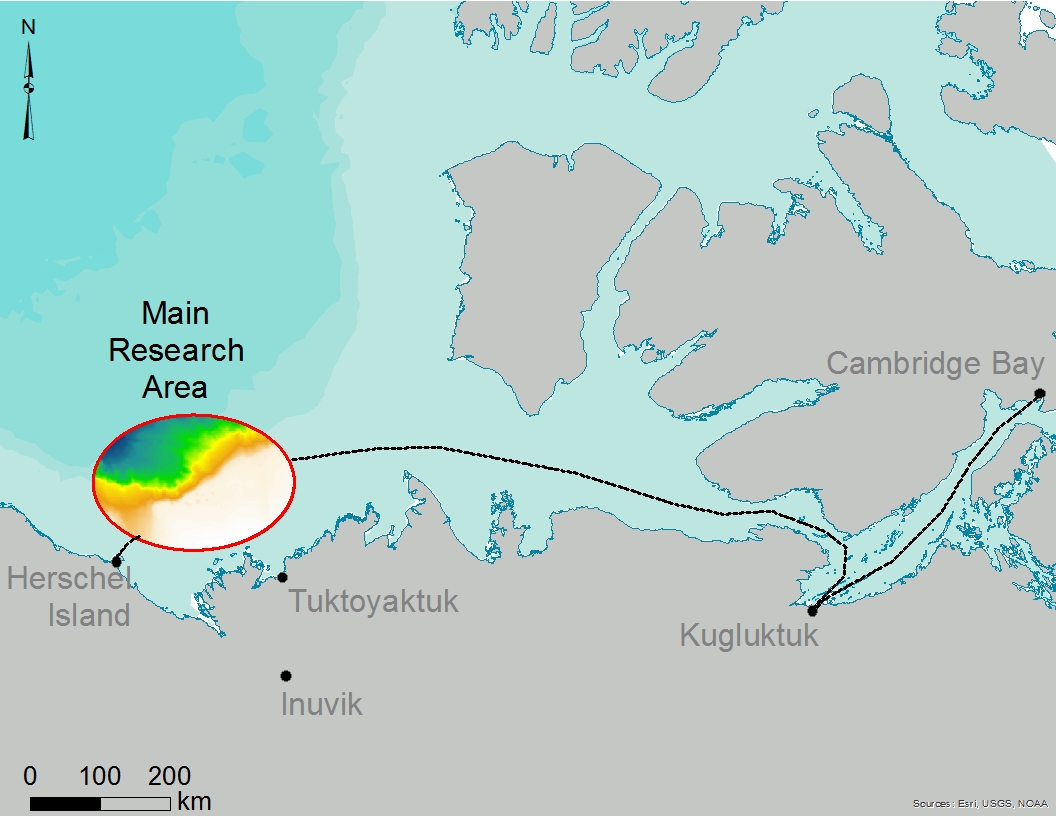 A map showing the route of the CCGS Sir Wilfrid Laurier.

MBARI’s goals during this cruise are to further investigate areas of gas seepage and document gas-venting structures. The team will survey areas of unstable seafloor and explore poorly understood large seafloor features that appear to be unique to the margin of the Arctic Ocean and may be associated with the freezing of sediments. The impact of submarine permafrost formation and/or degradation on the changes of the seafloor structure remains largely unexplored. They will also remap seafloor areas that are potentially active enough to have experienced measurable changes in morphology since the 2013 surveys. 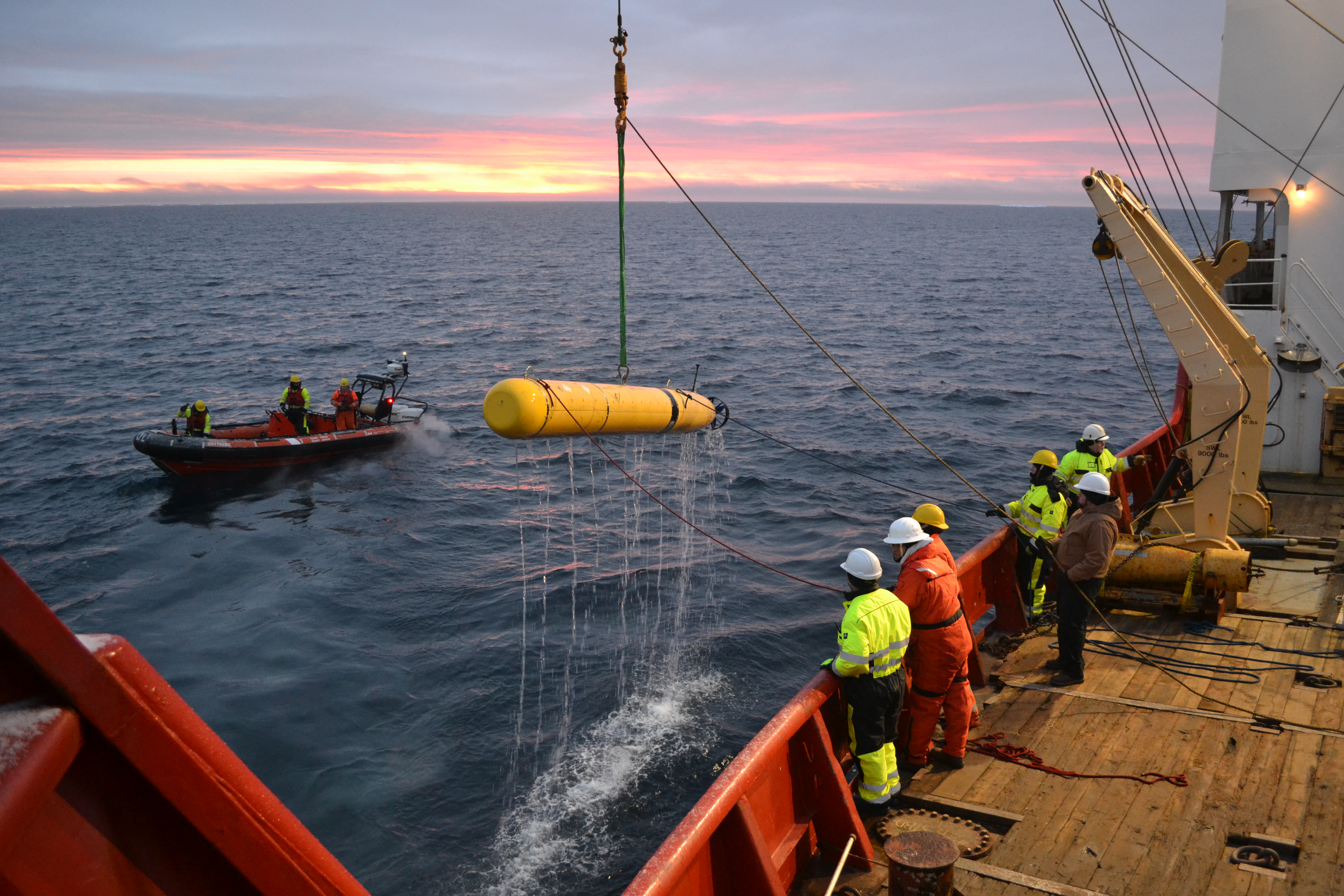 The MBARI mapping AUV being recovered onto the CCGS Sir Wilfrid Laurier in the Beaufort Sea.

Humfrey Melling, of Fisheries and Oceans Canada, is serving as chief scientist of this expedition, and will focus his research on sea ice and physical oceanography. Scott Dallimore and Michelle Côté, of the Geological Survey of Canada (GSC), are leading the geoscience studies on this cruise. MBARI’s Charlie Paull is helping guide the science effort, and MBARI is playing a leading role in the high-resolution AUV mapping and detailed ROV dives of the seafloor.

Imminent plans for exploratory hydrocarbon drilling on the outer shelf and slope of the Beaufort Sea have created a pressing need to characterize offshore geological hazards and identify sensitive marine habitat. The GSC is undertaking a regional appraisal of the area, which includes investigation of the distribution and geotechnical properties of shallow surface sediments, the activity of sea-bed processes, and the quantification of hazardous geologic environments.

October 3, 2016
While the ROV and AUV surveys are the priorities for this research expedition, as per the multidisciplinary nature of this mission, we are constantly designing other science tasks that are undertaken as time allows.

October 3, 2016
We recovered two AUVs during the first several hours of the morning. At 10:30 a.m. the MiniROV arrived at the seafloor at a depth of 240 meters. The mission objective was to ground truth a slump scar using the video camera on the ROV.

September 28, 2016
Autonomous underwater vehicle (AUV) and remotely operated vehicle (ROV) operations are now underway. Our team has developed a rhythm and the crew of the Sir Wilfrid Laurier (SWL) is expertly handling AUV and ROV deployments.

September 28, 2016
The principal activities conducted during this expedition on Sir Wilfrid Laurier are led by Chief Scientist Humphrey Melling of Fisheries and Oceans Canada.

September 26, 2016
As development continues in the Canadian Arctic, it is crucial for scientists to understand the causes and effects of changes to the seabed and to identify areas of special concern, including ecologically sensitive habitats as well as geohazards.

September 23, 2016
Today we sailed towards Kugluktuk, Canada, for a refueling stop alongside a Canadian fuel tanker. We sailed past the icebreaker CCGS Louis S. St-Laurent.

September 21, 2016
Yesterday we took a late-night flight from Yellowknife, Canada, to Cambridge Bay, Canada. Then we took a quick but cold ride, on a rigid-hulled inflatable boat (RHIB), out to the CCGS Sir Wilfrid Laurier and arrived onboard at around 10:00 p.m.

September 20, 2016
The weather is damp and windy, but the science gear was successfully loaded onto the Canadian Coast Guard Icebreaker (CCGS) Sir Wilfrid Laurier.