Steve Haddock’s research group and their collaborators study deep-sea gelatinous zooplankton (various types of jelly-like animals). Haddock’s research focuses on bioluminescence, biodiversity, and ecology of deep-sea and open-ocean ctenophores, siphonophores, radiolarians, and medusae. In addition to studying the evolutionary relationships of these animals, Haddock is interested in cloning the proteins that enable these jellies to emit light or fluoresce.

On this expedition, scientists will conduct research based on dives performed by the remotely operated vehicle (ROV) Doc Ricketts and supplemented by blue-water scuba diving and midwater trawling.

Siphonophores are an abundant member of the community of gelatinous zooplankton living in the deep midwater. There is a tremendous variety in size and shapes within the group: some siphonophores touting the title as “longest animals in the world”, with specimens reaching over 120 feet in length. The Biodiversity and Bioptics lab returned from their Western Flyer expedition with some amazing video, images, and samples of many siphonophores. There was a thousand-fold range in size of siphonophores they collected. This Apolemia lanosa can be five meters long, while the tiny calycophoran below is only five millimeters—much smaller than the diameter of a dime.

This baby calycophoran (Clausophyes moserae) was spotted using the high-definition camera on ROV Doc Ricketts, and then captured in a detritus sampler—a true testament to the abilities of our ROV pilots. The skill and ease with which they gently sample many of these microscopic, transparent animals is one of the many ways that make working on the Western Flyer such a pleasure and so scientifically rewarding. We could not successfully sample and observe the diversity of midwater animals without the tireless and enthusiastic efforts of the crew and ROV pilots! 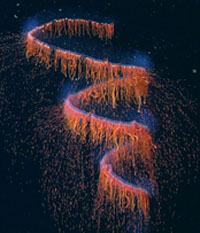 This undescribed physonect, called the galaxy siphonophore by Haddock and his collaborators, is one of the more spectacular of the deep-living species observed this week on the R/V Western Flyer. It is often found in this spiral shape, casting its many tentacles all around like a spider in its web.

Most of the siphonophore species in the ocean are found in the deep sea and are poorly known due to the difficulty of sampling these delicate animals from the deep sea. Chief Scientist Steve Haddock and his collaborators study this group because the many remarkable shapes, sizes, colors, and bioluminescence capabilities can help in understanding evolution in the deep-sea, the chemical processes involved in bioluminescence, predator-prey interactions, and biodiversity in the deep midwater. 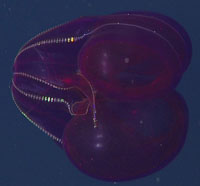 Comb jellies are beautiful gelatinous animals that live throughout the world’s ocean. They have ‘combs,’ or rows of cilia which are used to swim. Some have tentacles, some have lobes, some have neither, but all ctenophores have eight comb rows at some point in their life. Ctenophores are hard to figure out from photos — they are usually perceived “backwards” from their natural orientation since the mouth is on the “front”, and does not trail behind like in a typical pulsing jellyfish. This undescribed lobate ctenophore, most closely related to Lampocteis, displays a beautiful magenta color.

Ctenophores are predators using a variety of strategies, and live from top to bottom of the sea. There is even a group of ctenophores that live just above the seafloor. They attach to the tube or stalk of a benthic animal, using a notch in their mouth. Safely secured, they cast out their tentacles behind them in the current to catch small prey floating near the sediment. Ctenophores are important to understanding the early evolution of animals and how complex forms and systems evolved, since they split off from other animals near the time when multicellular organisms originated.

We have been studying this fascinating group this week and have captured some amazing images of a variety of ctenophores. Many families of ctenophores have two tentacles that extend away from the body to capture prey. This undescribed species, on the right, is a deep red and lives at depths of over 3,000 meters.

This benthic ctenophore, on the left, holds on to a polychaete tube sticking out of the sediment at nearly 4,000 meters deep. It has a specialized notch in its mouth to hold on while its tentacles stream behind in the current, catching small prey that float just off the seafloor.

When you think of predation in the open ocean, large fish and squid may come to mind. But in the deep midwater, the predators near the top of the food web include gelatinous zooplankton. Fish and jellies are snared by the stinging tentacles of large gelatinous animals like this jelly Solmissus (to the left) and this undescribed species of siphonophore. The small members of the diverse community living in the deep, dark waters of the open ocean have very few ways to avoid falling prey to many of these voracious, tentacled predators.

Solmissus sp. is a common predator found in the depths of the midwater. This one clings to a salp, which was still swimming in a vain attempt to escape before being consumed.

This undescribed species of physonect siphonophore has captured the common pelagic fish, Cyclothone signata. On the right side of the physonect, you may also be able to see the small jelly Solmundella with bits of the siphonophore’s tentacles in its gut. The fish will eventually be enveloped and digested by one of the gastrozooids, or stomachs, of the siphonophore. 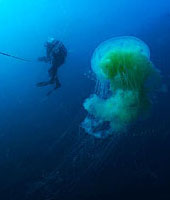 We often conduct blue-water dives to collect shallow jellyfish, comb jellies, and siphonophores, and other gelatinous animals. Over the last few days, the calm seas and beautiful weather have made for some great blue-water diving. Unlike most SCUBA dives, these are done far from land, with little but a small boat for orientation. As a safety measure, they attach to a rig of lines that hangs from the small boat, with a safety diver keeping watch for potential hazards. They use glass jars to gently capture gelatious zooplankton for study in the lab.

The divers observed a widespread salp bloom both in Monterey Bay and over 65 miles offshore. In this bloom, there are at least four different species of salps. There are also many egg yolk jellies (Phacellophora camtschatica) which usually eat moon jellies, but here they were feasting on the abundant salps.

Salps in the genus Pegea link together so that the axes of individuals are at right angles to the axis of the chain, like cans in a six-pack of soda, as shown in the image on the left. Cyclosalps, pictured on the right, are so named for the aggregations that form whorl-shaped chains. 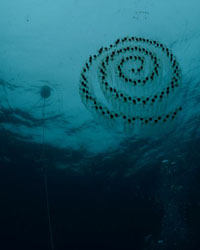 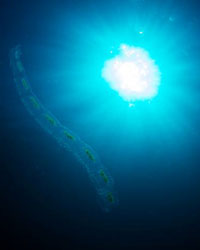 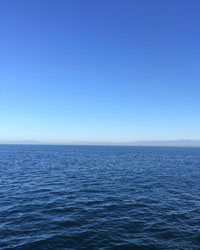 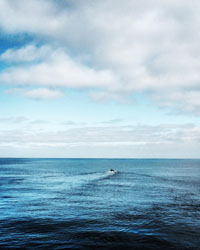 It’s a gorgeous day on the Monterey Bay. The biodiversity and biooptics lab is headed out on R/V Western Flyer for a seven-day expedition. They will be about 100 miles offshore of Monterey for a few days where they will study bioluminescent and other midwater animals. 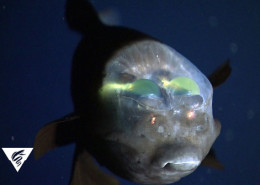 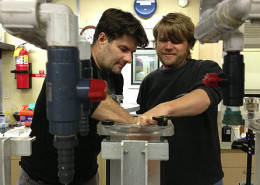 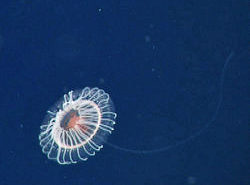