During this expedition, Senior Scientist Jim Barry and his research group will inspect the route along the Monterey Accelerated Research System (MARS), a 52-kilometer-long (32-mile-long) submarine cable that provides electrical power and data connections for research instruments in the deep sea.

MBARI is responsible for assessing environmental impacts of the cable across the continental shelf and upper slope every few years. We will accomplish this by monitoring:

Our primary objectives on this cruise are to inspect the cable route, noting the condition of the cable, and to collect samples necessary for the comparisons of biological communities or geological conditions at sites near the cable (called impact stations) and further away (called control stations).

We rely heavily on the remotely operated vehicle (ROV) Doc Ricketts to make these observations. We inspect the entire cable route using ROV cameras, and complete many close-up 100-meter video transects at each intensive sampling station to determine the abundance and density of all of the megafaunal species and objects that are identifiable in the video. Samples of the sediment are collected by the ROV’s robotic arms using sediment core tubes. We save subsamples of this sediment to analyze its characteristics. The top 10 centimeters of the remaining cores is sieved through fine-mesh screens to separate the macrofauna, which are preserved and stored in jars for later analysis.

The weather doesn’t seem to be cooperating much for this cruise, but we were still able to fit in three dives today. We wanted to finish sampling all of the stations and survey all of the cable route deeper than 200 meters (the shallowest diving limit for the ROV Doc Ricketts).

We completed our first ROV dive at a 400-meters-deep control station, then knocked out a second station at 350 meters depth. For each we collected 10 sediment cores and three close-up video transects. The winds were gusting over 30 knots, even though the forecast called for 20 knots at the most. We had to wait for about an hour, but eventually the winds died down enough to launch the ROV for the third dive, which we used to complete sampling at the last station and survey the remainder of the cable route up to 200 m depth. All in all, this was a very smooth cruise.

Does the presence of the cable cause ecologically significant changes for benthic communities on the shelf and slope? I don’t think so. We’ve not been able to detect much at all in terms of changes in faunal abundance (megafauna or macrofauna) or in sediment characteristics (grain size, carbon and nitrogen content).

We may have some surprises that emerge as these samples are analyzed over the next few months, but I doubt it. The abundance of some fishes, such as a few skates, ratfishes, ling cod, and dogfish sharks, were fairly high near 300 meters depth where the cable is exposed on the seafloor, but I don’t know that their abundance near the cable differs greatly from the same measure distant from the cable. All in all, the cable seems fairly benign in terms of its ecological impacts.

Seas are still a bit lumpy, but the weather has definitely improved. Our first ROV dive at 6:30 a.m. was at a control station at a depth of 400 meters. We quickly collected 10 sediment cores and completed three 100-meter-long video transects. After that, we immediately surfaced the ROV so we could move several kilometers to the second control station at 350 meters depth. Both stations were on a muddy, rather featureless bottom, with moderate densities of fishes, especially dover sole and deep-sea sole. Once complete, we moved the ROV through the water about 1.4 kilometers to the MARS cable route and slowly flew over the cable up the slope to inspect its condition. 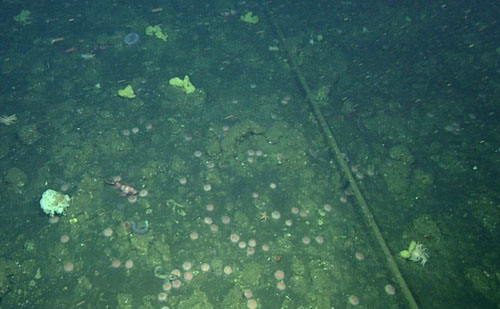 The cable was installed over ten years ago and it was difficult to follow its path at this depth (about 600 to 800 meters). The cable was buried during installation, and during the early years, the trench was filled in and its edges were fairly ragged. Now it is very shallow and difficult to follow. At one point, we simply lost sight of it visually, and couldn’t detect it easily on sonar. A faint sonar trace was visible if the trench was 20 meters off to the side of the ROV, but when the ROV was moved to center over the sonar target, there was little evidence of the trench. 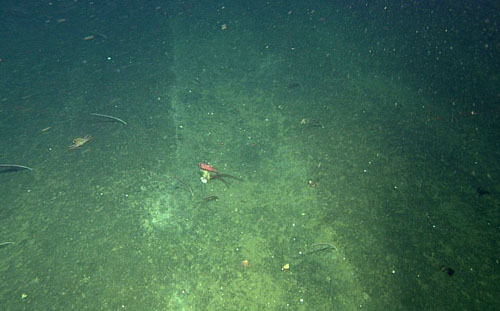 Slowly at about 0.3 meters per second, we followed the track for about four kilometers. At a depth of about 450 meters, the cable emerged from the sediment and was visible on the seafloor. In this area there is a carbonate rock pavement beneath the sediment surface that prevented the burial of the cable during installation. We followed the cable up the slope to about 360 meters depth, then stopped for the day. Along the exposed part of the cable, there is typically an aggregation of animals on, near, or under the cable. Some may be attracted simply by the physical structure of the cable, while others, like some deep-sea skates, may respond to the electromagnetic field near the cable, either being repelled or attracted.

We were out of time by 6:15 p.m. and the ROV pilots flew the vehicle back toward the surface. On deck, we removed our core samples and processed them in the wet lab, sieving the mud from the top five centimeters to extract the macrofauna, then preserved them for later detailed examination in the laboratory. Surfacial sediment samples (from the top two centimeters) from three other cores were stored and frozen for analysis of percent carbon and nitrogen, as well as sediment grain size measurements.

The wild weather from yesterday has calmed—at least the winds are down enough to dive, but the seas are still pretty rough though we were able to work quickly on the bottom. Our first dive sampled one of the control sites, a few kilometers from the cable, at a depth of 1,000 meters. We collected about 10 sediment cores and performed three video transects to be analyzed later. The cores will be compared to samples collected at sites directly over or adjacent to the cable. Overall, the biological communities over the cable route appear to be no different from what we’ve observed at the control sites, similar to what we found during surveys five years ago. 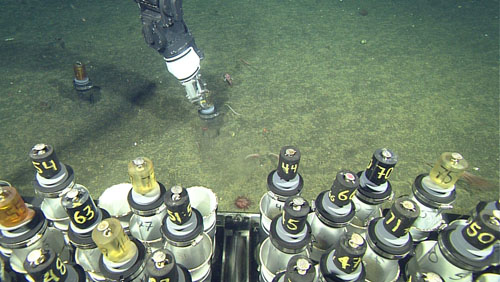 Upon landing the ROV on the bottom, we arrived at a methane seep, or ‘cold seep’, where methane and or sulfide-rich fluids occur at the surface of the sediment. Some highly specialized clams and worms have symbiotic bacteria in their tissues that can use chemical energy stored in sulfide or methane to fuel chemosynthesis. These microbes combine water and carbon dioxide to produce organic compounds–just like photosynthesis in plants, but fueled by chemical energy instead of solar energy. At this site, clams in the family Vesicomyidae (known to house chemosynthetic symbionts in their gills) were clustered around the sulfide rich sediments.

Our second dive was at the MARS node—an impact site for the cable study. We performed the same sampling of sediment cores and video transects, but also inspected the MARS node. Once complete, we began flying over the cable route to check its condition. We were checking if the cable was buried or visible on the seafloor. We were also looking to see if the cable trench was filled in. For most of its route the cable trench is very shallow (only a few centimeters) and tends to collect a bit of sediment and debris, compared to the surrounding areas. Hopefully the seas will drop overnight and make the ride a little less bouncy.

We boarded the R/V Western Flyer under stormy, but clearing skies this morning, and headed 30 kilometers west from Moss Landing to the seaward end of the MARS cable. Our first stop today was at a site over the axis of Monterey Canyon. We deployed a small oceanographic mooring used to monitor sediment flow along the axis of the canyon. This mooring, along with a flotation pack, current meter, sediment trap and optical backscatter instrument was attached to an old railroad wheel and deployed over the side of the ship. It will collect sediment samples and observations of suspended sediment and current direction and speed for the next six months, until its recovery in June, 2015.

Data from the mooring will help explain the pattern of sediment and carbon transport along the canyon axis, as well as the frequency and intensity of turbidity flows in the canyon. After an hour of deck operations, the mooring was released over the side and we continued on to the first MARS sampling site.

Upon launching the ROV Doc Ricketts at the first MARS control station, we dove quickly and made it to the bottom (200 meters deep) in about 10 minutes. We immediately began operations, collecting sediment cores, and performing three 100 meter-long video transects. The seas were fairly rough today, making it much more difficult for the ROV pilots to fly smoothly near the seafloor. Instead of flying a nice straight transect along the bottom, the ROV path was pretty shaky. Even still, the video will be suitable for determining the abundance of megafauna. We completed sampling at this station in about an hour.

We headed to the next station a few kilometers away and met seas even heavier and winds gusting over 30 knots–too rough for ROV operations. We waited and hoped for the seas to drop for about an hour to no avail, and had to abort operations for the day. The 10 sediment cores we collected from the first dive were processed quickly and we had plenty of time to relax before dinner. The forecast shows better weather tomorrow; we have lots of stations to complete by Friday night. 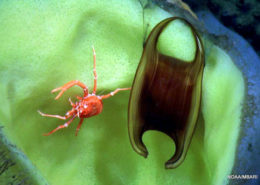 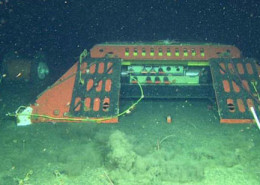 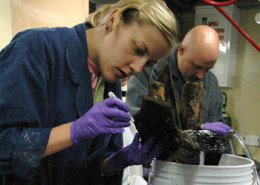