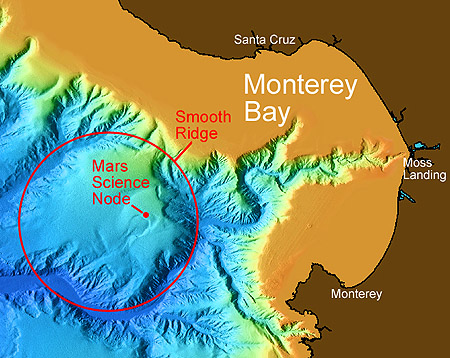 The Monterey Accelerated Research System (MARS) ocean observatory is located about 891 meters (2,923 feet) below the sea surface. The main science node (and all science experiments to date) are located on Smooth Ridge, about 25 kilometers west-northwest of Monterey.

Most of Smooth Ridge is covered with fine, muddy sediment, with occasional outcrops of harder sediment and carbonate rocks. The fine sediment is at least 5 to 10 meters thick at the MARS observatory site. This mud probably accumulated several million years ago. Geological studies suggest that little, if any sediment is accumulating on Smooth Ridge today.

The waters overlying MARS science node are affected by both nearshore processes, such as upwelling, and offshore processes, such as the meanderings of the California Current. Especially during spring and summer, wind-generated upwelling takes place northwest of Monterey Bay, creating surface plumes of cold, nutrient-rich water that flow along shore and across the mouth of the bay. These plumes usually flow east of the MARS site, but help generate surface currents that typically form a counter-clockwise gyre centered over Smooth Ridge. Occasionally upwelled water may be entrained in this gyre and carried out to the MARS site.

At other times of year, water from the California Current or the sub-equatorial Pacific may be carried toward shore and flow across the MARS site. During the winter months, the site may be affected by the northward-flowing Davidson Current. During the summer months, this northward current disappears from the surface waters, but continues to flow at depths of 200 meters or more, and is sometimes known as the California Undercurrent.

Researchers at MBARI have been studying and surveying the seafloor animals on Smooth Ridge since at least 1994. Many of these animals are typical for soft-sediment areas along the continental slope. Different animal communities occur at certain depths. Even at a single depth, denser animal populations or different groupings appear in distinct patches. Several chemosynthetic biological communities are known on Smooth Ridge, mostly along the steep edges to the west and south.