ORCA’s Eye in the Sea

ORCA’s Eye in the Sea stands on the deck of the R/V Point Lobos following the 2009 deployment. Around the camera, far-red light sources illuminate the scene in a color most animals can’t see. Image: Kim Fulton-Bennett, ©2009 MBARI.

Look around on land, and you can see life everywhere. But it’s a different story down in the deep ocean. There are still plenty of animals around, but deeper than about 200 m (660 feet) there’s no light left to see them. Instead, light comes from the sea creatures themselves. More than 90 percent of them give off faint bluish flashes and glows, called bioluminescence, that seem unearthly to visitors from dry land.

It’s the phenomenon of living creatures making their own light. Although we know the basic chemistry, we still don’t know precisely why animals light up or even how many types of glowing creatures there are down in the depths. ORCA’s Eye-in-the-Sea (developed by ORCA — the Ocean Research and Conservation Association) is helping us find out.

When looking around in the dark, it’s natural to use a flashlight, and that’s how most research in the deep sea is done: cruising in a submarine behind bright headlights. But it’s not a great way to find shy creatures, which can dodge out of the way of the loud, glaring sub. By taking the opposite approach – sitting quietly and watching in the dark – the Eye-in-the-Sea lets creatures come to it.

How the Eye-in-the-Sea sees in the dark

Dr. Edith Widder and Ph.D. student Erika Raymond examine an early version of the Eye in the Sea before a brief deployment in Monterey Bay in 2003. Image: Kim Fulton-Bennett, ©2003 MBARI.

The basic design is a very sensitive black-and-white video camera mounted on an aluminum tripod. The camera amplifies stray photons of light to create images we can see. The seafloor around MARS is so deep and dark that a nearby bioluminescent animal can light up the screen almost as if it were a cruise ship passing at night.

The camera is focused on a spot about 2 meters (6 feet) away and can see an area about 2 m wide. Extra illumination is provided by powerful red lights that are invisible to most sea creatures. The added light helps in identifying animals by making their non-luminescent parts visible.

ORCA’s Eye-in-the-Sea can lure curious animals into view in one of two ways: by offering bait or by grabbing their attention using an electronic flashing jellyfish lure. Scientists plan to soon add a high-resolution color camera (with powerful flash) that they can trigger remotely when something interesting swims into view. 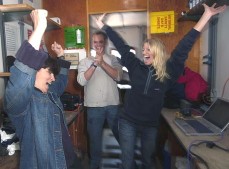 The electrical power running day and night to the MARS observatory will solve the Eye-in-the-Sea’s most nagging limitation: battery life. In the past, the Eye’s power-hungry lights and equipment have curtailed its missions to a maximum of two days. That doesn’t leave long for rare deep-water creatures to swim into view.

Previous missions captured only one or two creature snapshots per day. (The snapshots were often thrilling – the Eye’s very first use of the electronic jellyfish captured images of a 2-m [6 feet] long squid completely new to science.) The Eye-in-the-Sea will stay at the MARS site for three to six months at a time, with cameras running 24 hours a day. The whole time, the MARS data link will bring the images to shore as they’re taken, allowing scientists to watch, trigger experiments with the electronic jellyfish, or grab stills with the color camera as soon as they see something extraordinary.

Such long surveillance creates huge video archives to sift through. School children will have the chance to help the scientists cope with all the data, by watching the video and making a first pass at identifying the creatures they see. Lesson plans and activities are under development to help teachers take advantage of ORCA’s Eye-in-the-Sea as a teaching tool.

Eye-in-the Sea: An Innovative, Unobtrusive Camera System – NOAA Ocean Explorer
NOAA Operation Deep Scope 2005 – pictures, video clips, and a daily log from a 2005 expedition to the bottom of the Gulf of Mexico
A marine bioluminescence primer for teachers. From Bioscience Explained.
An animation of the Eye in the Sea camera. [2 Mb Quicktime file courtesy Harbor Branch Oceanographic Institution.]