Bringing a little bit of home

Forty days is a long time to be away from home; people onboard had to leave husbands, wives, children, and friends behind. We have been at sea for 26 days now, but many people are still comforted by mementos from home. Some brought nothing, preferring to pack light and content with the knowledge that they would return home soon. Others, however, were sent from home with special mementos. 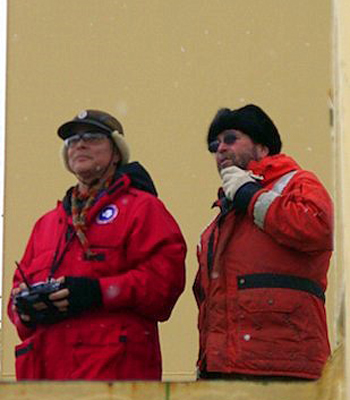 Kim Reisenbichler flew a successful UAV mission today while wearing the lucky aviator scarf his daughter, Sarah, wove for him before he left. To his right is co-pilot Craig Dawe. Photo by Lindsey Eckern.

Kim Reisenbichler wore the good-luck scarf his daughter Sarah hand-wove for him while he flew the UAV today; the flight was successful and the landing was beautiful. Rob Sherlock packed a stuffed penguin to take pictures with for his son Kieran. Ben Twining’s five-year-old daughter Semma sent him with grapefruit-flavored gummies so they could continue their tradition of eating grapefruit together. Ben’s wife also helped their two children prepare note cards for him to open on different days of the cruise. Paul McGill’s wife, Patsy, wedged cards, notes, and other little gifts in his luggage. Every so often, he stumbles upon one of the notes and it brightens his day. Amanda Kahn’s boyfriend, Clark, uploaded video messages for her to open during the cruise so she could see and hear from him. Everyone brought along a few select photos from home. Some hung them up in their rooms or near their workstations; others brought them as digital photo albums.

These mementos remind everyone that when they come home at the end of the cruise there will be smiling, familiar faces waiting.