Preparing to go outside of the ship’s heated interior takes a considerable amount of time. Most indoor areas are heated to 20ºC or higher, while outside temperatures are typically around 0ºC. Layering is a strategic way to deal with the drastic temperature differences. The extreme cold weather (ECW) gear issued to everyone at the beginning of the cruise includes many layers of long underwear, fleeces, and jackets to keep people warm. One of the most important layers for going outside is a wind-resistant outer shell. Wind chill has reduced temperatures to as much as -20 ºC, and even when wind is not blowing, there is wind chill whenever the ship is moving. A hat, scarf, and gloves are also important to remember—people often hurry outside for sudden photo opportunities, such as a penguin sighting in the water or a shapely iceberg. Freezing hands are usually the first thing to force them back inside when they forget gloves. 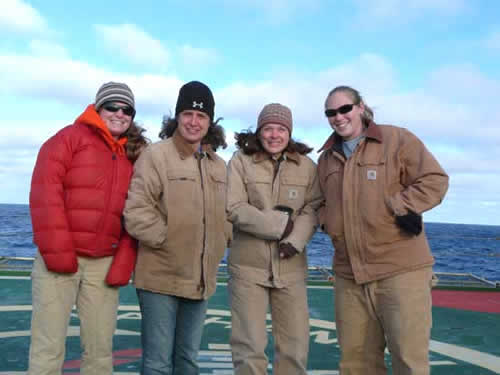 Diane Chakos, Maria Vernet, Karie Sines, and Lindsey Eckern are prepared for the outdoors on a cold, sunny day. Photo by Diane Chakos.

Float coats and body suits keep those working on the deck warm for the many hours they must be outside. Steel-toed, waterproof boots are essential for deck work as well, since waves can splash up at any time.

Though often overlooked at first, preparing to go outside also involves applying sunscreen. Though we are not present during the time of greatest ozone depletion, from about September to November (Antarctic spring), exposure to ultraviolet radiation is a risk down here. Sunglasses help prevent snow blindness, which is a result of overexposure of the eye to UV radiation.

In spite of the preparation involved, being outside is one of the greatest pleasures. The cold air, roaring waves, ocean life, and massive icebergs remind us what an extreme and unique environment the Southern Ocean is.