A hundred photos during a flicker of sunlight

This afternoon was full of photo opportunities as the Palmer steamed through a strip of ocean called “iceberg alley” for its multitude of icebergs. Clouds opened up to reveal blue sky and sunlight. Just about everyone made their way up to the bridge or the bow—two of the best viewing spots on the ship—to snap photos at some point during the day. Icebergs as large as buildings floated past, shining in the sunlight and casting shadows on themselves and other, smaller icebergs. 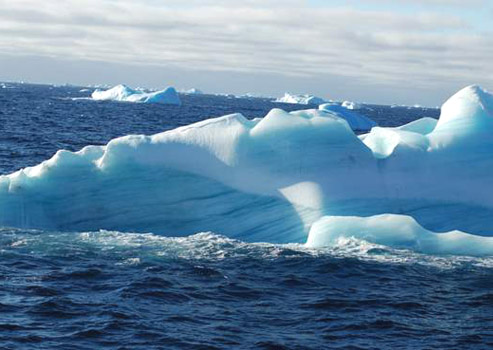 A blue-streaked iceberg floats among the many we saw while passing through “iceberg alley.” Photo by Johnny Pierce.

We were very fortunate to have sunlight as we pass through iceberg alley; the combination of plentiful icebergs and sunlight made for brilliant photos. Icebergs come in a variety of shapes and colors, from stark white pinnacles to blue-streaked domes, gray-green tabular masses to jagged ice striped with black. Every iceberg is unique and offers a different combination of features, including peaks, arches, caves, rounded mounds, and furrowed curves.

In addition to floating ice, wildlife abounds in the cold Antarctic waters. We have seen chinstrap penguins dive and porpoise leap out of the water. Minke whales spout mist as they breathe; humpback whales surface to breathe and sometimes breach. Seabirds including prions, Antarctic petrels, cape petrels, and southern giant albatrosses soar alongside the ship. On a few occasions, we encounter seals swimming or hauled out on chunks of floating ice.

The science events and people are the final photo subjects. Documenting what is happening allows us to share with the public on this website, and will be valuable for the scientists later. A picture is worth a thousand words for future publications, presentations, and reports. Also, the scientists can use the photos to help improve equipment or mimic experimental setups on future expeditions.

Everyone is an amateur photographer out here with a number of photogenic subjects. Friends and family should be prepared for the hundreds of photos that will come home from this expedition.