Sensing through the fog

As we travel across the Weddell Sea toward iceberg TK-231, the bridge is monitoring the surrounding area for other, smaller icebergs we may pass by. The day was foggy and snowy, making a visual search difficult. Radar increased the bridge’s ability to search and to make the transit safely. 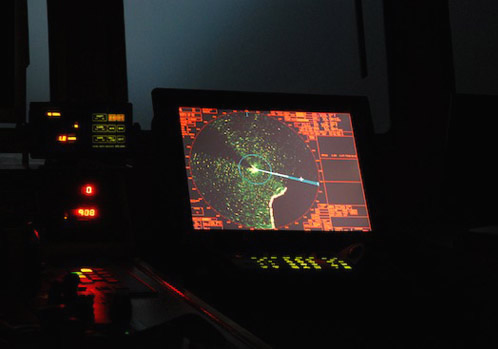 The ship’s radar system shows an image of an iceberg. Photo by Rob Sherlock.

Radar allows the bridge to detect small icebergs in the water; however, radar also shows choppy waves and more intense regions of snowfall. Choppy water hides small pieces of ice floating near the ship, requiring visual lookouts in addition to the radar. The ship’s able-bodied seamen—Sam Villanueva, Lauro Garde, Fernando Naraga, and Louie Andrada—rotated shifts so that someone was constantly watching for growlers, small icebergs that can be up to ten meters long but drift less than one meter above the water line. Growlers weigh up to 120 tonnes and can cause hull damage if the ship hits them too fast, so the ship posts lookouts and reduces its speed in low-visibility weather. In clear weather, lookouts on the bridge can see about 14.5 kilometers to the horizon, but that range was reduced to about half a kilometer today because of snowfall. Radar is the only long-distance sight the bridge has in low-visibility weather, and it doubles the bridge’s ability to see ice in clear weather (to about 32 kilometers).

As an interesting side note, radar cannot follow the curvature of the Earth. It only detects objects that are a straight line away, meaning flat objects are visible only as far as the horizon. But mountains rise above the horizon and can be seen from far away. Mountain peaks and the coastline over 150 kilometers away have been visible on radar.