The bridge’s role in deployments

Captain Mike Watson and the mates of the Palmer have been integral to the science being conducted on this cruise.

Deploying and recovering equipment carries varying amounts of risk, depending on weather, sea conditions, and currents. No specific protocols are laid out for deploying some equipment, so the captain must judge when conditions are too rough to risk a deployment. The bridge’s first concern is the safety of both the ship and the people onboard. The captain considers wind speed and direction, currents, swell height, and proximity to the iceberg to determine whether a science event is safe to carry out. If conditions are deemed safe, then the marine technicians, who work on the deck to deploy the equipment, evaluate the working conditions. With those two groups’ approval, the science party is left to judge whether a science event should occur under given conditions.

Accommodating what the science teams need for their sampling can be very trying. One of the more demanding situations is the ROV. The ROV recently did two dives in one day, and spent more than six hours in the water. During ROV deployments, Captain Mike and mates Gary Talbot, Rachelle Pagtalunan, and Brandon Bell actively kept the ship stationary throughout the dives. Due to thePalmer’s size, wind can rotate or shift the ship to the side, and on that day, winds were blowing up to 25 knots. As testament to the bridge officers’ skill and experience, the ship’s bow and stern thrusters were not used to maintain a stationary position for ROV deployments. Thrusters are strong, and can resist rotation or shifting, but at the cost of drowning out acoustic signals from sensitive scientific equipment. The bridge successfully maintained the ship’s orientation in the strong winds by positioning rudders and the main engines to use wind to their advantage; the wind pushed the ship back into proper position. 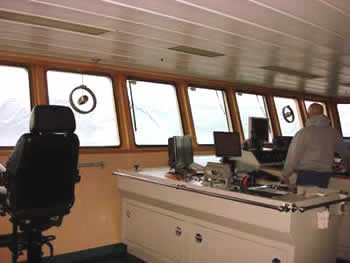 Other instruments have their issues, too. MOCNESS trawls must be towed very slowly or else the nets can tear under the straining pressure. The bridge ensures that the ship moves slowly enough by using just one engine. Also, surface mapping demands a precise course through the water surrounding the iceberg, then a return to that same course later.

Though instruments can be refined and optimized for sampling, they are useless if they cannot be deployed or recovered safely and correctly. The officers have expertly commanded the ship to help get as much data collection as possible.