During one of the first safety meetings, Stian Alesandrini, our marine projects coordinator and a trained EMT, warned that the most common health problem on Antarctic cruises is dehydration. Making sure to drink enough water does not immediately come to mind when one pictures all of the snow and ice in Antarctica, but Antarctica is the largest cold desert in the world. A desert is defined as a region that receives less than 250 millimeters of rain each year; parts of Antarctica receive less than 20 millimeters. Near the coast and out on the ocean, the air is not that dry — the relative humidity during our cruise has consistently been high (85 to 100 percent). Still, cold air cannot hold as much moisture as warm air. Cold air (let’s say at 1ºC which is the temperature outside the ship right now) at 85 percent relative humidity will contain less moisture than air at 21ºC (a typical outdoor temperature in central California). In addition, when cold air is pumped in and heated to warm the interior of the ship, its moisture content does not change, thus the relative humidity inside of the ship is much lower than what we measure outside. 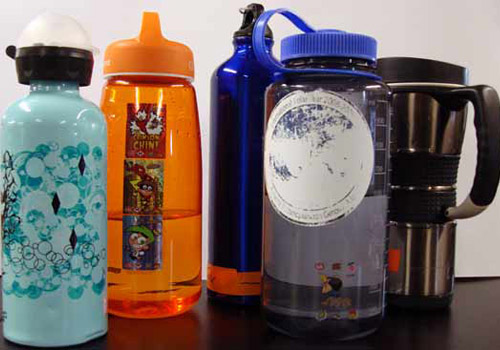 Most people carry bottles filled with water in order to stay hydrated in the dry, heated air. Photo by Amanda Kahn.

Symptoms of mild dehydration include nausea, dry mouth, headache, and disorientation. Even if dehydration has not developed enough to have its own symptoms, not having enough water in one’s system also makes one more susceptible to seasickness. Though seasickness is an unavoidable part of going out to sea, it is best to reduce the chances of being affected by it, since it slows reaction times, causes drowsiness, and lack of focus — not to mention a queasy feeling.

On the ship, we have a plethora of hot and cold beverages to stave off dehydration. Juices such as apple, orange, grape, and peach juice line the shelves in the mess hall. Milk, water, soda, carbonated water, coffee, and tea are also available any time of the day or night.

As lab experiments continue, everyone will need to be mindful to drink enough water.