A day of sorting

A day of processing MOCNESS trawl samples is a full day indeed. Ron Kaufmann’s team, which includes Dani Garcia, Mike Fox, Larry Lovell, Rob Sherlock, and Stephanie Bush, has a long day of work when MOCNESS samples are collected. Scheduling sleep is especially difficult for them. For three nights in a row, the trawl is put in the water and then recovered early the next morning. Once the MOCNESS comes out of the water, all samples must be processed that same day.

An outline of the processing involved is described in the daily expedition log from March 17. To give a timeline of this process, the MOCNESS is deployed around 10:00 p.m. It is brought back up around 4:00 a.m., and sorting begins shortly thereafter. Samples are kept in a zero-degree Celsius cold room and sorted in trays placed on pans of ice to keep them cold. Fortunately, the sorters are able to work at room temperature, usually accompanied by music from someone’s mp3 player. The first bucket is finished right before breakfast, around 7:30 a.m. By lunch, three buckets have been completed. In the afternoon, the final three buckets are processed by dinner time at 5:30 p.m. After one hour for dinner, formalin preservation begins in earnest and finishes up around 7:30. By then, it is only two and a half hours before the MOCNESS goes back in the water for another night of sampling. 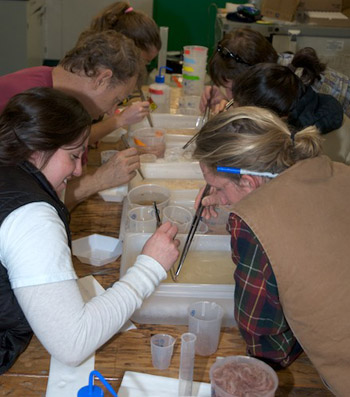 Today, the sorters are taking a well-deserved day off. Tonight, the MOCNESS is going back in the water, so processing will start up again tomorrow.