For humans, the Southern Ocean is an inhospitable place: the water temperature is at or below zero-degrees Celsius (the freezing point of freshwater), air temperature and wind chill can cause hypothermia, and large waves and swell are common. When equipment is deployed or recovered from the back deck, many precautions are taken to protect those involved from the harsh environment.

Float coats—full-body jumpsuits and jackets with built-in insulation and floatation—provide protection from the icy water. Waves can wash over the deck and get people wet. Even in calm weather, science events may require hours of work outside; float coats keep wearers warm and dry. 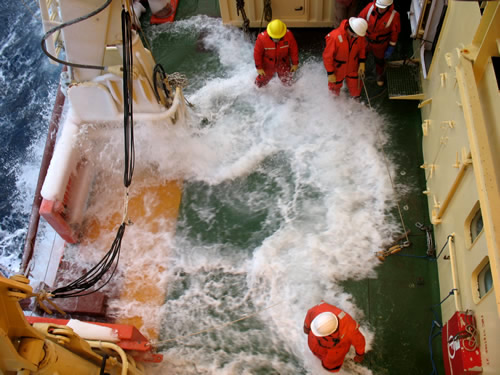 Hard hats must also be worn while working on deck. There are a number of overhead dangers, including wires being pulled under high tension, and tools or icicles that could fall. Although only small icicles, less than five centimeters long, have shown up on this cruise, in 2008, icicles up to 30 centimeters long covered the ship. Even if such overhead dangers were not present, the unpredictable rocking of the ship can pull someone out of balance and cause them to bump into low-hanging obstacles. 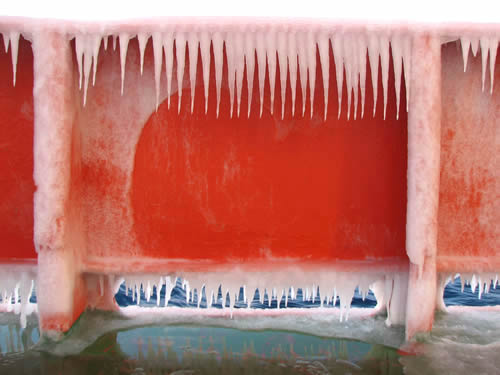 During the previous cruise in 2008, icicles grew over 30 cm long. Only small icicles, less than five centimeters, have shown up on this cruise. Photo by Ron Kaufmann, 2008.

When work requires people to get close to the ship’s edge, they must wear a special belt over their float coat with rings for attaching a lifeline, a line that is tied to the ship so the person can’t fall into the water. In some cases, a special “dog run” is used to anchor lifelines, allowing the wearer to move from side-to-side but preventing them from falling overboard.