Yesterday’s post introduced the lifeboats on the ship. Today’s post further describes the lifesaving features of the lifeboats and some of the resources available if one must abandon ship.

Abandoning the ship is the last resort during an emergency. The crew on the Palmer is well-trained on safety, fire-fighting, repair, and rescues. Also, the ship comes with an emergency generator, replacement parts for all necessary machinery (as described in yesterday’s post), and enough food for people onboard to eat for at least a few months (often up to a year). In an emergency of abandoning ship, people are confined to a much smaller, less visible vessel. Still, at times it is unavoidable.

The Palmer has two lifeboats, one on the starboard side and the other on the port side. Each lifeboat can carry all 70 people onboard, which includes scientists, staff, and crew, in case one lifeboat is inaccessible during an emergency. Boats are not released until all people are accounted for. 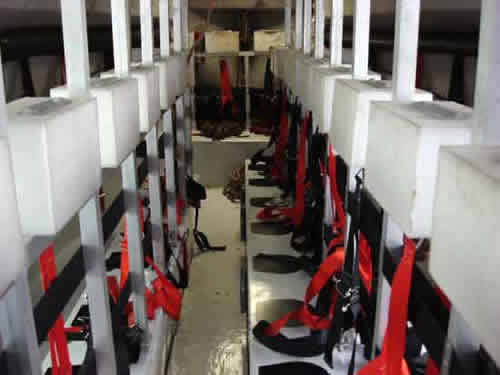 Each lifeboat fits the entire capacity of the ship–70 people–in close quarters. Photo by Amanda Kahn.

Once a lifeboat is lowered into the water, its engine has enough diesel fuel to run at full speed (6 knots) for at least 24 hours. This amount of time may not get the boat to land, but it helps get the boat out of the way from a sinking ship or other dangers. There are also oars and oar holes in the side of the boat, if needed.

It would take a rescue ship about a week to transit from Punta Arenas and then find a lifeboat at our present position in the Southern Ocean, so each person on the lifeboat needs to have enough water to last a week. Every person gets 3 liters of water and 2400 kilocalories of high-protein food ration. Water can also be stored in the benches and ladled out with a spoon or cup. Enough motion sickness tablets are stored in each lifeboat to provide everyone with 3 days of relief. Two heaters plus the cramped quarters inside the boat help keep it from getting too cold in the freezing Antarctic waters, but warm clothes are important as well. 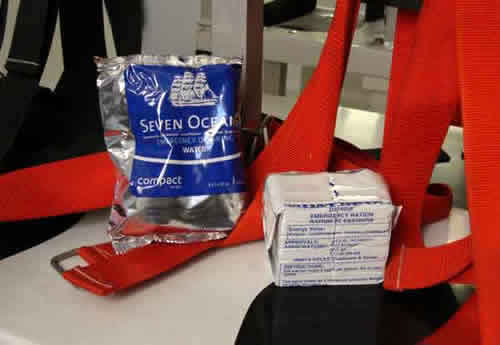 Rations for each person on the ship includes two water packets (left) for a total of 3 liters of water and one package of emergency food ration (right). Photo by Amanda Kahn.

All of these resources are optimized to increase the chances of survival. Still, the lifeboats are a part of the ship that we hope never needs to be used.