Being out at sea makes it difficult to stay up-to-date on what is happening in the world and our lives, but the Information Technology (IT) group on the ship works hard to help keep us connected.

The ship maintains an email system that transmits emails via satellite three times a day. The satellite is expensive ($8/minute to transfer files), so everyone is limited to about 25 kb of email per day. Twenty-five kilobytes per day is plenty for plain text emails (it equals about 180 pages of written text), but photos and attachments, often taken for granted on land, are too big to send using our email system. 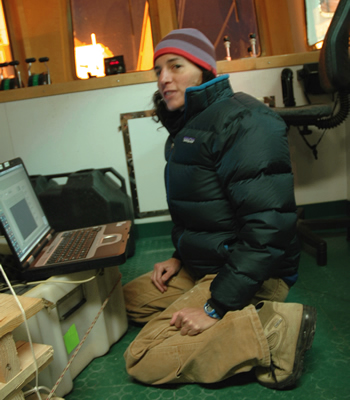 In the last few years, the Department of Defense and the National Science Foundation acquired access to an Iridium phone system, which functions similar to a cellular phone and can connect to anywhere in the world. There is one Iridium phone on the ship, called the “morale phone,” and it is used by the science staff, support staff, and ship crew. With so many people wishing to use the phone, calls are limited to 10 minutes.

To stay current with media, a movie library is updated two or three times per year, allowing the support staff and crew, who spend long stretches of time at sea, to watch new movies. The ship receives a news feed from the New York Times and USA Times each day, which keeps us up-to-date on current events. The update includes all of the headlines from the newspaper and even transmits the New York Times crossword puzzle.