Summertime in the Southern Hemisphere

Seasons in the southern hemisphere are opposite from those in the northern hemisphere due to the tilt of the earth. The first ICEBERG cruise occurred in December 2005, equivalent to the austral (southern hemisphere) spring. The second cruise was in the winter (May and June 2008), and this third cruise is happening during austral summer. So while winter rains are falling in California, we encounter summer conditions in the Southern Ocean.

A summer surprise when we arrived in Punta Arenas was the availability of certain types of fruit. Everyone was used to eating citrus and apples in the U.S. (since those are in season this time of year), but since arriving in Chile, we have been feasting on fresh peaches, plums, grapes, avocados, mangoes, and pineapples—all summer fruits—even aboard the ship. 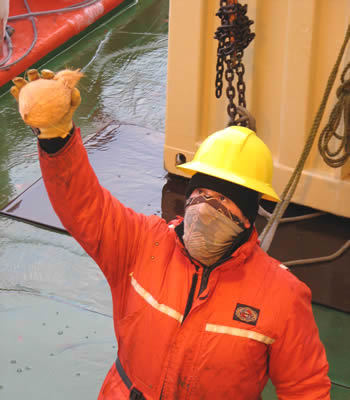 Jake Ellena with a coconut out in the Antarctic. Photo by Ron Kaufmann.

One of the major advantages to doing our work in the summer is day length. Daylight near the poles lasts a long time during summer—sunrise today was at 6:30 AM and sunset was at 7:45 PM, with light remaining in the sky until almost 9:00 PM. Extended daylight means more time to deploy certain equipment requiring visual acuity, such as the ROV, LST, and UAV. Other equipment can be deployed any time of the day, with the MOCNESS preferably at night.

More daylight and higher temperatures (though still near-freezing) also mean that the icebergs are melting faster than in the winter. With faster rates of melting, the chance of detecting a meltwater signature from the icebergs in the seawater may improve.