A little good luck our way

Certain traditions and customs are common in maritime culture. Tradition states that sea-going travelers departing from the port of Punta Arenas, Chile, must rub the toe of one of the statues in the town square. Rubbing the toe promises safe return from an ocean voyage; all members of this cruise made sure to visit the town square at some point before the cruise began. One cruise participant nearly forgot, and woke up early the day we were leaving port to run to the square and rub the toe. 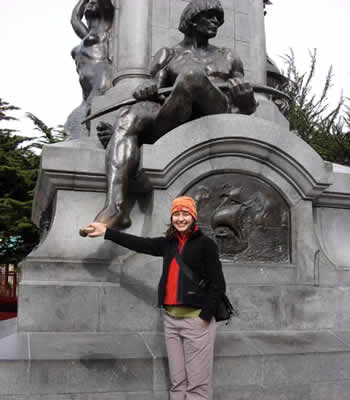 This photo shows Stephanie Bush, a research technician for Bruce Robison, rubbing the toe the afternoon before we boarded the ship.

Today, an albatross flew along with our ship for almost the whole day—a sign of good luck according to tradition. The luck of the albatross was well-respected historically. Sailors refused to hunt albatrosses even if their ship had run out of food, because killing the large seabirds was believed to bring bad fortune to their ship. Some of the misfortune that befell the ship in Samuel Taylor Coleridge’s Rime of the Ancient Mariner was attributed to the killing of an albatross.

Traditional sayings about the sea are still uttered today. “Red in the morning, sailors’ warning; red at night, sailors’ delight” refers to a prediction of weather. A red sunrise predicted bad weather ahead, while a red sunset indicated calm seas. While this simple forecast system is not always accurate, it is based on the observations of many generations of sailors and can be a general guide if modern forecasts are not available.