The p‘s and q’s of going to Antarctica

Designing a research expedition in the Southern Ocean involves years of preparation prior to the cruise. Each of the researchers involved have been planning what equipment to ship down to Antarctica for months. Everything must be considered, from figuring out how to pack the medium-sized remotely-operated vehicle IceCUBE to remembering to pack enough sample bottles for 40 days at sea. Research groups have been preparing packing lists since the end of the previous cruise in July 2008 partly because shipments have to go out early; it takes four to eight weeks for shipments to travel from the U.S. to Punta Arenas, Chile.

Planning lab activities is not the only level of preparation necessary before an Antarctic cruise. Unlike oceanographic cruises in other regions of the world, every individual for this frosty mission went through a series of medical tests to ensure they are healthy and able-bodied for the additional stresses of working in polar waters. Extreme cold, a dry desert climate, biting winds, rolling seas, and long work-hours all lead to wear and tear on one’s body during a research expedition, so every participant undergoes a “physical qualification,” or “PQ” process. We all reached PQ status by completing dental and physical examinations, with appointments scheduled months in advance (most appointments were in December or January for this March cruise).

Equipment design and testing has been ongoing since the first iceberg cruise to the Southern Ocean in 2005. Not long after returning from Antarctica last July, engineers Alana Sherman, Paul McGill, and Brett Hobson began developing systems for this mission. Kim Reisenbichler, Craig Dawe, and Jake Ellena have spent many hours and taken courses on flying remote-controlled airplanes in preparation for using these instruments to deliver GPS tracking units onto the icebergs. 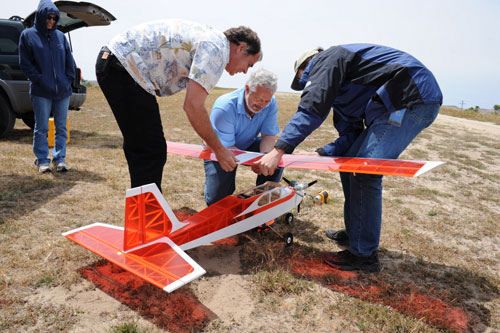 Finally, traveling by air from the United States to Punta Arenas, Chile, takes more than 24 hours. All of this preparation was necessary to embark on a cruise for 40 days of important, pertinent research in one of the most unknown environments in the world.