After being cleared for customs, the science groups were allowed off the ship late last night. People rushed down the gangplank to stand on dry land. Jake Ellena joked that the walk down the pier was the longest distance he’d walked without having to double back or open a door for over a month! As people spent the day today unloading the ship, all spoke of their post-cruise plans. A number of cruise participants will travel, either for a few days in the area surrounding Punta Arenas or to scenic destinations such as the Patagonian lowlands and straits, the Chilean Andes, and the cloud rainforests of Ecuador. Others will head back on the first flights out tomorrow. 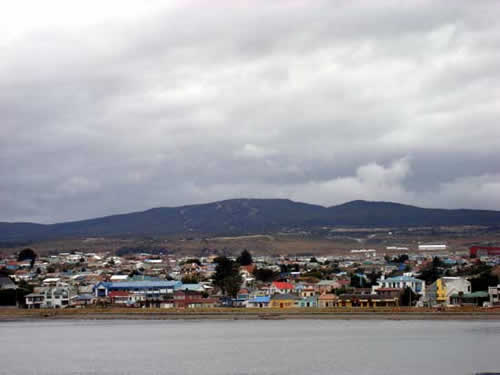 The colorful view of Punta Arenas greeted the science teams back to land. Photo by Amanda Kahn.

The cruise began in high spirits and ended in high spirits. People spoke of the things they looked forward to doing upon returning to land. For some, eating a particular food was the strongest draw to land—a hamburger from the local hamburger restaurant in Punta Arenas, chocolate (which was jokingly used as a form of currency while on the ship), and fresh fruits and vegetables topped the list. Many others were excited at the prospect of soon returning home to their families.

Tonight we will celebrate the end of a successful cruise with a dinner party. Everyone has exchanged photos and contact information as life on the ship is replaced by life on land—until the next cruise.