The Palmer entered the calm waters within the Straits of Magellan today. A pilot boat approached the ship in the afternoon and transferred a pilot from the small vessel onto the ship. Pilots are used heavily for navigating ships into ports, but their critical role is often overlooked. 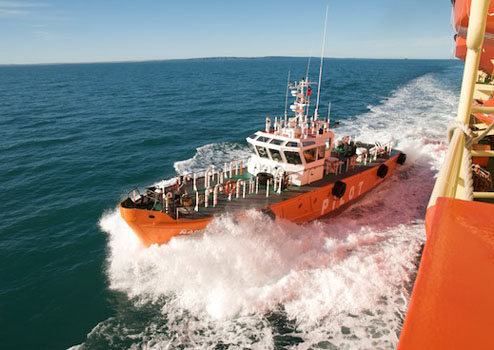 A pilot boat transfers a pilot onboard the Palmer. The pilot assists the bridge with navigation through the local waterways. Photo by Debbie Nail Meyer.

Pilots help direct large ships into ports or up and down rivers. Each pilot is familiar with his or her particular port, to an extent that one could accurately draw a chart of the port from memory onto a blank piece of paper. Their knowledge includes depths, tides, currents, hazards, and other underwater features and measurements. Such detailed knowledge is important so pilots can accurately navigate large vessels through narrow, shallow, or winding routes. Pilots are required to escort ships with large tonnage like the Palmer.

Once a ship enters waters under a pilot’s jurisdiction, a pilot boat approaches. The two vessels come close enough that the pilot can cross from one to the other. The pilot then goes up to the bridge and advises the captain or bridge crew controlling the ship. Once the ship navigates through the toughest parts of the straits, the pilot is picked up again by the smaller pilot boat. Otherwise, the pilot will ride into port with the ship.