When it was built in 1992, the Nathaniel B. Palmer was designed to accommodate a wide range of scientific research. Geological, physical, chemical, biological, and integrative oceanographic expeditions have populated the ship’s schedule over its 17 years of service. There are a number of labs for science groups to work in, including a hydro lab equipped with a seawater flow system, two large general labs, and two dry laboratories, which offer computer workspace. These lab spaces are versatile and can be modified for many different scientific applications, but some research requires special working environments. 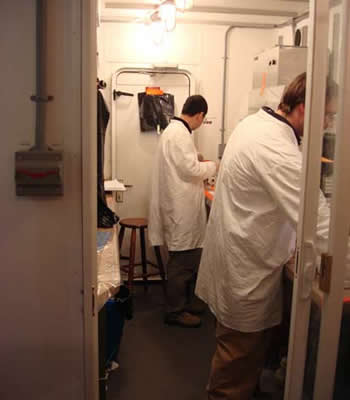 Hai Lin and Scott Kindelberger do iron and peroxide analyses in the trace metal van. The portable laboratory provides a clean environment, reducing the chance of sample contamination from external sources. Photo by Amanda Kahn.

Science “vans” are brought onboard for special laboratory applications. Vans are portable laboratories about the size of a shipping container that can be loaded on and off the ship. On our cruise, we have three science vans functioning as additional lab space: the light van, radioisotope (rad) van, and the trace metal van. The light van houses cultures and experiments that require special light and temperature conditions. It is set at near-freezing temperatures like the Southern Ocean and emits blue light at wavelengths similar to ocean color. The rad van is where radioisotope analysis takes place. It provides instruments and a safe environment for working with radiolabeled isotopes such as carbon-14. Finally, the trace metal lab is outfitted with an area to process trace-metal Niskin casts and a special trace-metal-clean lab area. Air filters trap any dust, which might transfer trace elements inside, and a sliding door encloses the space to maintain a clean environment.

For other cruises, these vans are not necessary or others take their place. The portable nature of the vans enhances the ability for the Palmer to suit the needs of every science team onboard.