The engine room, located below the main deck and below the water line, houses the engines, generators, freshwater distillers, wastewater processing, and other essential ship machinery. Five diesel fuel tanks are distributed throughout the lower deck, to distribute the weight of the over 1.8 million liters of fuel that can be brought along. Each of the five fuel tanks is drained a little bit at a time, to maintain proper weight distribution for the ship. Ballast tanks, which can be filled with seawater to alter the ship’s trim, also line the lower deck. Ballast tanks are filled as fuel levels are depleted, so that the ship never becomes too light. If the ship is too light, it sits higher out of the water and is less stable. 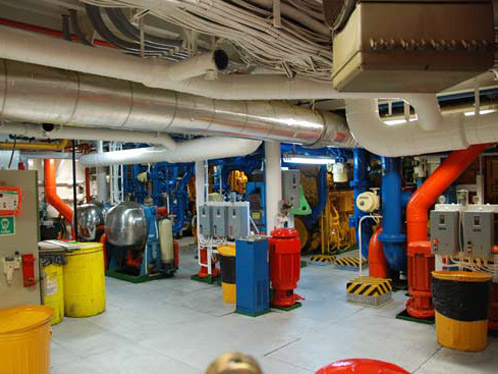 The millions of liters of diesel fuel stored onboard enable the Palmer to go on cruises up to 75 days. The ship efficiently uses the energy produced from the fuel by running diesel engines at 900 rotations per minute (rpm). Diesel engines decrease in efficiency as the rate of rotation increases, so maintaining a constant, low rpm keeps the ship efficient. Waste heat produced by generator engines is used to heat seawater during the water purification process.

The Palmer was built in 1992 and has been conducting expeditions in polar oceans nearly continuously since that time. The machinery does not reflect the 16 years of service at all; the lower deck is always kept very clean—not a common feature for most vessels. Rainbows of pipes run through the engine room. Engines and their corresponding pipes are yellow. Blue freshwater pipes, orange seawater pipes, brown wastewater lines, and black bilge pipes weave through the lower deck. Air lines are painted green. Color coordination helps the engineers and other crew identify the proper pipes for what they are working on; it would be unfortunate for a crew member to accidentally open a wastewater pipe when the intention was for a freshwater line.

With so many powerful moving parts, personal protective equipment (PPE) is important and abundant for those working near the engines. All who enter the lower deck don ear protection, safety glasses, steel-toed shoes, and gloves as protection from the potential dangers of the engine room. Loud machinery dominates the working environment. A loud roar erupts into the control room overlooking the engine room whenever the door connecting them is opened.