The engines and generators that power the ship are inaccessible features to the science groups until an end-of-the-cruise tour of the engine room; however, a recent interview with first assistant engineer Rob Morrison revealed the inner workings of the ship. 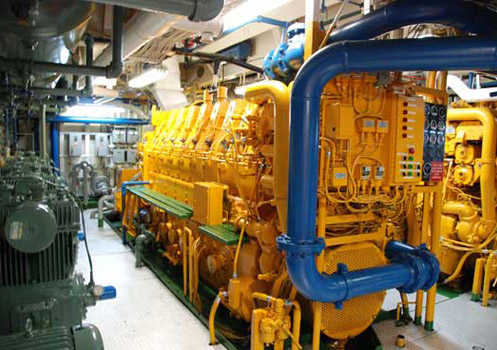 One of four 8-cylinder diesel engines powering the ship. Two engines are connected to each shaft and propeller. Credit: Johnny Pierce.

Four 3,000-hp diesel engines power the 93.9m long ship. The Palmer typically runs on two engines in open water, though some activities, such as breaking heavy ice or maneuvering into port, require more or less engine output. The ice breaker is powerful enough to break through ice one meter thick at three knots without backing up and ramming the ice.

The ship accelerates and decelerates differently from cars and other vehicles; cars accelerate as the crankshaft in the engine turns faster. On the ship, engines run at a constant rate of 900 rotations per minute, and speed is varied using controllable pitch propellers (CPP). Changing the pitch, or angle, of two giant (4m diameter) propellers changes the velocity. As an example, to move in reverse, the ship rotates its props 180 degrees.

Electricity for the vessel is generated from four diesel generators, each with an output of 1070 kilowatts. Typically, two generators are sufficient to power the ship, but having four ensures backups and allows extra power to be produced when extra energy-consuming features, such as the stern thruster or seismic compressors, are used. Other backup generators, which are tested weekly, stand by to power essential functions such as navigation and radar if anything happens to the main generators.