In this southern polar region, certain aspects of daylight differ from what we have become accustomed to in the temperate zone of the northern hemisphere.

The fall equinox on March 20 split our cruise into late summer and early fall. The amount of daylight has changed considerably since the beginning of March, when daylight lasted for 14 hours and darkness for 10 hours. Now, little over a month later, daylight has decreased to 10 hours per day and darkness now lasts for 14 hours. In terms of MOCNESS trawls, the decreased daylight provides a greater window for nighttime deployments. The change is not as opportune for other operations such as ROV or UAV deployments, as the window of daylight keeps shrinking. Day length will continue to shorten until the winter solstice in July. During the solstice, day length at 60 degrees south latitude is only six hours long. At 70 degrees south, that number is reduced to zero. 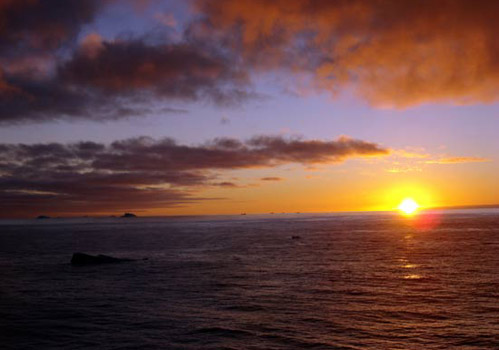 Sunsets last over an hour in the polar ocean because the sun moves more slowly across the sky. Photo by Amanda Kahn.

Sunrises and sunsets last longer in polar regions as well. A person standing on the equator spins through the day faster than someone standing at the South Pole because the equator has a greater circumference than 60 degrees latitude (which marks the beginning of the poles). The person at the South Pole would see the sun move in a smaller arc across the sky—from the northeast to the northwest—over a course of 24 hours. This means the sun appears to move more slowly, resulting in sunrises and sunsets that last for over an hour.